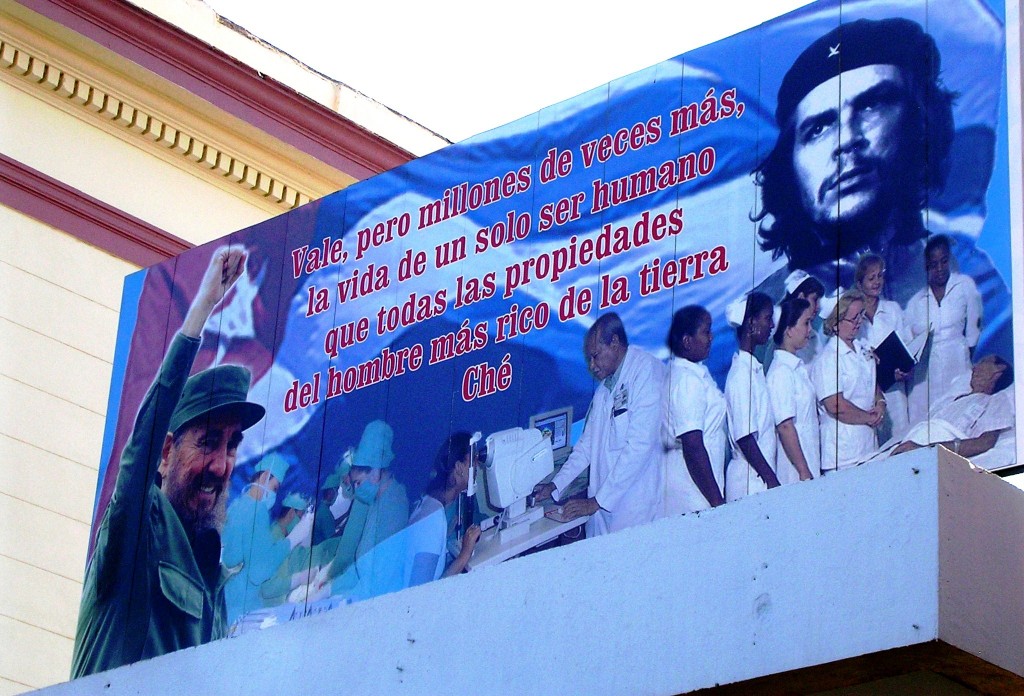 At the main entrance to the Calixto Garcia Hospital in Havana there still stands a large billboard that reads:

“The life of one single human being is worth millions of times more than all the wealth of the richest man in the world.” (Author’s translation)

The statement is a quotation attributed to Ernesto Guevara. The billboard has gone through various versions and was there at least as far back as when I saw it in 1995.

At first glance – or even after many years’ worth of glances – this may seem like a noble sentiment, poetically expressed. One is drawn into some sort of warm worshipful respect for such deep thought and for its author. Perhaps he is merely saying that a human life is worth a whole lot, which is undeniable. Perhaps this is just a poetic (and pre-numerate?) exaggeration in the manner in which the Bible says that Methusalah lived for a thousand years or Solomon had 700 wives and 300 concubines.

However, if words are to have meaning and if one thinks about it for a minute, this assertion appears more like foolishness than wisdom. Indeed from the perspective of economic logic or “applied common sense” it is absurd.

The richest man in the world was John D. Rockefeller, whose peak wealth was $318.3 billion (based on 2007 US dollars). If the life of a single human being was one million times larger, it would be valued at $318.3 Trillion. In comparison, the GDP of the US in 2007 was $13.9 Trillion (World Bank, World Development indicators 2009,  p.209) while that of Cuba in 2010 was 64.3 Billion in Moneda Nacional (ONE Anuario Estadistica Cubana 2011, Table 5.17).  Obviously if one person’s life was worth the Che Guevara number and medical investment in that single individual merited that amount of resources, then the resources available for everyone else in both the United States and Cuba would be zero.

In fact nobody’s life is worth an infinity of real resources. My own Father’s life was not judged to be worth an investment of some $5,000.00 by the Ontario medical system at the Kingston General Hospital. When he arrived at the Emergency Ward in 1989, taken there by a Medical Doctor namely my brother, it was judged by the staff that he was too old at age 82 for the more expensive treatment of the time and that a lesser treatment only was appropriate. This undoubtedly cut short his life but by how much I do not know. In my view, $5,000.00 was not a reasonable valuation of his life. But neither would have been $318.3 Trillion.

In actual fact, Cuba has used the scarce resources available for its health services “economically” and wisely. It has managed to squeeze good health results from relatively modest budgets.

Cuba has dropped numerous other economic absurdities promoted by “Che”. This includes the “New Man” approach to the mobilization of human energies and the “budgetary system of finance” (which abolished accounting and financial independence at the level of the enterprise and attempted to run the economy if it was one huge bureaucracy in which there was no knowledge of the value of what was produced nor of the costs of production.)

Perhaps it is time to reconsider all Che’s pronouncements with a critical mind.

See also The Marketing of “Che” Guevara: A Review of “Che’s Afterlife: The Legacy of an Image”, by Michael Casey

This entry was posted in Blog, Featured and tagged Che Guevara, Politics. Bookmark the permalink.