Sagebien & Spadoni: TWO ARTICLES ON THE IMPACTS OF US-CUBA NORMALIZATION ON CANADAIAN BUSINESS WITH CUBA

Below are links to two articles by Julia Sagebien and Paulo Spadoni on the impacts of US-Cuba normalization on Canadian business relations with Cuba.

O CANADA, WILL CUBA STAND ON GUARD FOR THEE? PREPARING FOR THE END OF THE US EMBARGO ON CUBA 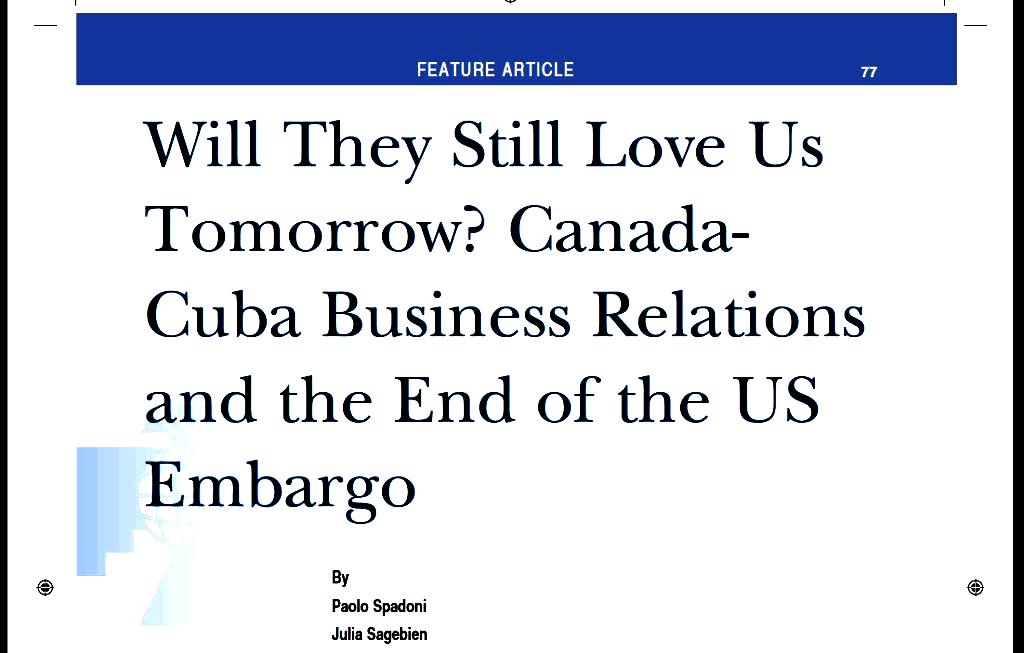 WILL THEY STILL LOVE US TOMORROW? CANADA-CUBA BUSINESS RELATIONS AND THE END OF THE CUBAN EMBARGO

A publication appeared in 2010 on Canda-Cuba Relations. It is now hyper-linked in this Special Edition of Canadian Foreign Policy Volume 16 Issue 1; Spring 2010 edited by Professor Lana Wylie. Political Science, McMaster University, Hamilton Canada. The journal is produced by the Norman Paterson School of International Affairs, Carleton University, Ottawa. This issue is a bi-national production with Cuban authors as well as Canadians. Summaries of the articles are summarized below. The complete essays are available in the hyper-linked source above.

SHIFTING GROUND: CONSIDERING THE NEW REALITIES IN THE CANADIAN-CUBAN RELATIONSHIP

The articles in this issue of Canadian Foreign Policy consider the current relationship as well as survey the history of Canada’s association with Cuba, touching on the highs and lows of the relationship and making suggestions about the future direction of Ottawa’s policy toward the island state. In selecting the articles that would appear in this issue, the editorial team at the journal and myself, as special editor for this issue, strove to ensure that the issue reflected a range of approaches and perspectives. The nine scholars who penned the following articles thus write from the perspective of six different disciplines: Geography, Political Science, History, Spanish and Latin American Studies, Business, and Economics. Even more interestingly, they tackle the relationship from both the Canadian and the Cuban perspectives, and bring fresh epistemological approaches to the study of the issues.

Peter McKenna, John Kirk, and Archibald Ritter are well-established Canadian scholars with careers that have been  devoted to the relationship. Not only have each of them spent much time in Havana, but they have done so in many capacities, from being visiting scholars at the University of Havana to advising the Canadian government about the direction of policy. In this issue they give us important perspectives on how the history of Canada’s approach toward Cuba is likely to shape the current direction of policy. The various approaches taken by Heather Nicol, Calum McNeil, and Julia Sagebien and Paolo Spadoni both challenge established ways of making sense of the relationship and complement the perspectives taken in other articles of the issue.  Each of these scholars has contributed much toward our knowledge  of Cuba, and in this issue they make crucial observations about the  various ways in which we have to come to understand the relationship. However, it was especially important that an issue devoted to furthering our understanding of the Canadian-Cuban  relationship reflect on it from both the Canadian and Cuban  perspectives. Luis René Fernández Tabío and Raúl Rodríguez help  us appreciate the view from Cuba. The two articles by the Cuban  contributors further demonstrate that what Canadians take as  given facts about Cuba, or about Cuba’s relationship with Canada, are notsettled at all.

CANADA AND THE CUBAN REVOLUTION: DEFINING THE RULES OF ENGAGEMENT 1959-1962 RAÚL RODRÍGUEZ RODRÍGUEZ

As the US economic sanctions were instituted, the Cuban government turned to other Western states, Canada among them, to try to minimize the economic impact of US policy. Canada’s export-oriented economy was poised to benefit from the new  opportunities offered by the Cuban market, and Cuba offered  Canada a means to assert its sovereignty by forging an independent  foreign policy stance. Canada was forced to observe  restraint and allegiance to its NATO partners, and especially to its closest ally, the United States—the state most hostile to the outcome of the Revolution in the context of Cold War. This complex scenario started to unfold in 1959, and was fraught with challenges and opportunities for Canada Cuba bilateral relations.

For most of Prime Minister Jean Chrétien’s ten years in office, his approach toward revolutionary Cuba was predicated on a policy of constructive engagement, or principled pragmatism. The piece begins by outlining the nature and extent of Canada-Cuba engagement, exchange, and dialogue during the Chrétien period. The article will then identify what worked in terms of bilateral relations and what did not, and in light of the Chrétien highs and lows, it will highlight the key lessons learned and explain why. Lastly, it will conclude with a series of policy recommendations for Canadian governments (current and future) to contemplate if Ottawa—especially given the changing United States-Cuba dynamic—hopes to enhance and strengthen ties with a post-Fidel Cuba.

This study examines Canadian newspapers and Parliamentary texts dating from 2000 to 2009. It suggests that there is, and has been, a consistent relationship between media portrayal of Cuba issues since the mid-1990s, but that in recent years as Canada’s  certainty of, and support for, Cuba has declined, a contradictory press facilitates an ambivalence towards Cuba that reflects the current state of Canada-Cuba relations.

Since 2000, less than one percent of all newspaper articles published in all Canadian major dailies have discussed Cuba. This lack of media coverage is striking, considering that Canadian companies have invested largely in Cuba and that Canadians have been among the largest groups of vacationers to the island for quite  some time. The Canadian International Development Agency (CIDA) has invested millions in official development assistance, while the current Conservative Government plays upon human rights issues on the island and the inherent failures of former rounds of Canadian constructive engagement to resolve these. The maintenance of normalized relations with Cuba has been  consistently challenged in Parliamentary debates by Conservative MPs. The latter have linked human rights abuses on the island with an increasingly critical approach to Canada’s traditional policy of constructive engagement.

During the Colonial era, from Independence to 1959 and throughout the regimes of Presidents Fidel and Raúl Castro, Canada and Cuba have maintained a normal and mutually beneficial economic relationship. During the first half of the 1990s, this relationship was invaluable for Cuba as it adjusted to the loss of Soviet subsidization and to its disconnection from the former Soviet Bloc. In these years, Canadian participants were enthusiastic and optimistic about future economic relations. However, in the 2000s this was replaced by greater realism and some skepticism concerning the possibilities for deepening economic interaction.

Despite geopolitical and ideological obstacles, the economic relationship between Canada and Cuba has, for the most part, been characterized as a prosperous and positive exchange for the two countries and its people over time. This paper suggests that Canadian-Cuban relations hold the potential to function within a different framework as a kind of new paradigm for North-South relations in the Western hemisphere in the face of US hegemony and its confrontational policy toward Cuba. With Canada and Cuba having benefited from a practice of good business, perhaps this exchange has provided a stable and prosperous base for the two nations to critically analyze structures to build upon for future relations. The significance of this relationship could be explained as a kind of mutual understanding the two have in the making of a new history, the outcome of the two countries having shared a common geographic position in relation to the United States.

TO ENGAGE OR NOT TO ENGAGE: AN (A) EFFECTIVE ARGUMENT IN FAVOUR OF A POLICY OF ENGAGEMENT WITH CUBA     CALUM MCNEIL

This paper seeks to explore the role of emotion in Canadian and American policy toward Cuba, with specific consideration of the emotional and normative dynamics associated Canadian-Cuban policy during the 1990s, and with the Cuban Democracy Act of 1992 and the Cuban Liberty and Democratic Solidarity (Libertad) Act of 1996. A key point of comparison of this analysis is the assumption shared by both Canadian and American policy toward Cuba that regime change is inevitable, and that it will invariably correspond to the norms predominant in the domestic political systems of both states. It is my contention that a consideration of emotion allows us to gain insight into the decision-making behaviour in both states—and amongst the mass publics contained within them. It also allows us a means to more fully understand the possible particularities that distinguish the rational calculus of one state’s policies from another. By broadening our understanding of these, I illustrate how a policy of engagement is preferable to either embargo or constructive engagement.

THE TRUTH ABOUT CUBA?    JULIA SAGEBIEN AND PAOLO SPADONI

The search for truth in and about Cuba is an elusive and puzzling pursuit primarily affected by: 1) competing narratives of contested events; 2) the emotional distress that accompanies the experience of cognitive dissonance; 3) the Cuban cultural propensity towards vehement disagreement; and 4) the syncretic capacity of Cubans to inhabit several worlds at the same time. Canadian Cuba observers must strive to develop a balanced understanding of these competing narratives about Cuba and of the people