By Archibald R. M. Ritter and Ted A. Henken 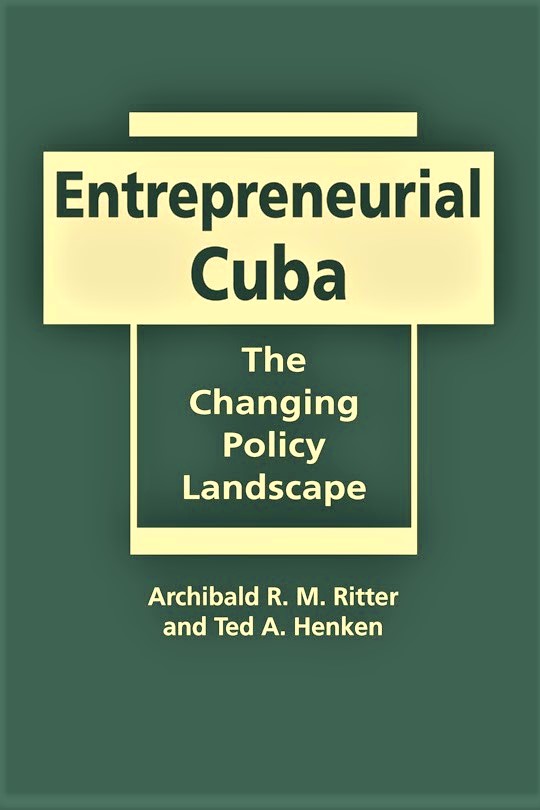 The small business sector, under many different guises, often has been, since the 1960s, at the center of Cuban economic policy. In some ways, it has been the canary in the mine. As ideological winds have shifted and economic conditions changed, it has been repressed or encouraged, morphed and gone underground, surviving, if not thriving, as part of the second or underground economy. Along the way, it has helped satisfy consumer needs not fulfilled by the inefficient state economy. This intricate, at times even colorful, trajectory has seen the 1968 Revolutionary Offensive that did away with even the smallest private businesses, modest efforts to legalize self-employment in the 1979s, the Mercados Libres Campesinos experiment of the 1980s, and the late 1980s ideological retrenchment associated with the late 1980s Rectification Process.

Of much consequence—ideologically and increasingly economically—are the policy decisions implemented since the 1990s by the regime, under the leadership of both Castro brothers. Initially as part of Special Period, various emergency measures were introduced to allow Cuba to cope with the economic crisis precipitated by the collapse of the communist bloc and the end of Soviet subsidies. These early, modest entrepreneurial openings were eventually expanded as part of the deeper institutional reforms implemented by Raúl upon assuming power in 2006, at first temporarily, and then permanently upon the resignation of his brother as head of the Cuban government.

In keeping with the historical zigzag policy pattern surrounding small businesses activities—euphemistically labeled these days as the “non-state sector”—while increasingly liberal, they have not been immune to temporary reversals. Among the more significant reforms were the approval of an increasing number of self-employment occupations, gradual expansion of the number of patrons restaurants could serve (as dictated by the allowed number of chairs in privately owned paladares), and the gradual, if uneven, relaxation of regulatory, taxing, and employment regulations. Absent has been the authorization for professionals (with minor exceptions, such as student tutoring) to privately engage in their crafts and the inability to provide wholesale markets where self-employed workers could purchase inputs for their small enterprises.

The authors of this volume, an economist and a sociologist, have combined their talents and carefully documented this ever-changing policy landscape, including the cooperative sector. They have centered their attention on post–Special Period policies and their implications, specifically to “evaluate the effects of these policy changes in terms of the generation of productive employment in the non-state sector, the efficient provision of goods and services by this emergent sector, and the reduction in the size and scope of the underground economy” (297).

While assessing post-1990 changes, Entrepreneurial Cuba also generated a systematic examination of the evolution of the self-employment sector in the early decades of the revolution in light of shifting ideological, political, and economic motivations. Likewise, the contextual setting is enhanced by placing Cuban self-employment within the broader global informal economy framework, particularly in Latin America, and by assessing the overall features of the second economy in socialist economies “neither regulated by the state nor included in its central plan” (41). These historical and contextual factors are of prime importance in assessing the promise and potential pitfalls the small enterprise sector confronts in a changing Cuba.

Rich in its analysis, the book is balanced and comprehensive. It is wide ranging in that it carefully evaluates the many factors impinging on the performance of the small business sector, including their legal and regulatory underpinnings. The authors also evaluate challenges in the Cuban economic model and how they have shaped the proclivity for Cuban entrepreneurs to bend the rules. Present is a treatment of the informal social and trading networks that have sustained the second economy, including the ever-present pilfering of state property and the regulatory and transactional corruption so prevalent in Cuba’s centralized economy.

While none of the above is new to students of the Cuban economy—as documented in previous studies and in countless anecdotal reports—Ritter and Henken make two major contributions. First, they summarize and analyze in a single source a vast amount of historical and contemporary information. The value of the multidisciplinary approach is most evident in the authors’ assessment of how the evolving policy environment has influenced the growth of paladares, the most important and visible segment of the nonstate sector. By focusing on this segment, the authors validate and strengthen their conclusions by drawing from experiences documented in longitudinal, qualitative case studies. The latter provide insights not readily gleaned from documentary and statistical sources by grounding the analysis in realistic appreciations of the challenges and opportunities faced by entrepreneurial Cubans. Most impressive is the capacity of Cuban entrepreneurs to adapt to a policy regime constantly shifting between encouraging and constraining their activities.

Commendable, too, is the authors’ balanced approach regarding the Cuban political environment and how it relates to the non-state sector. Without being bombastic, they are critical of the government when they need to be. One of their analytical premises is that the “growth of private employment and income represents a latent political threat to state power since it erodes the ideals of state ownership of the means of production, the central plan, and especially universal state employment” (275).

This dilemma dominates the concluding discussion of future policy options. Three scenarios are considered possible. The first entails a policy reversal with a return to Fidel’s orthodoxy. This scenario is regarded as unlikely, as Raúl’s policy discourse has discredited this option. A second scenario consists of maintaining the current course while allowing for the gradual but managed growth of the non-state sector. While this might be a viable alternative, it will have limited economic and employment generation effects unless the reform process is deepened by, for example, further liberalizing the tax and regulatory regimes and allowing for the provision of professional services.

The final scenario would be one in which reforms are accelerated, not only allowing for small business growth but also capable of accommodating the emergence of medium and large enterprises in a context where public, private, and cooperative sectors coexist (311). As Ritter and Henken recognize, this scenario is unlikely to come to fruition under the historical revolutionary leadership, it would have to entail the resolution of political antagonisms between Washington and Havana, and a reappraisal by the Cuban government of its relationship with the émigré population. Not mentioned by Ritter and Henken is that eventual political developments—not foreseen today—may facilitate the changes they anticipate under their third scenario.