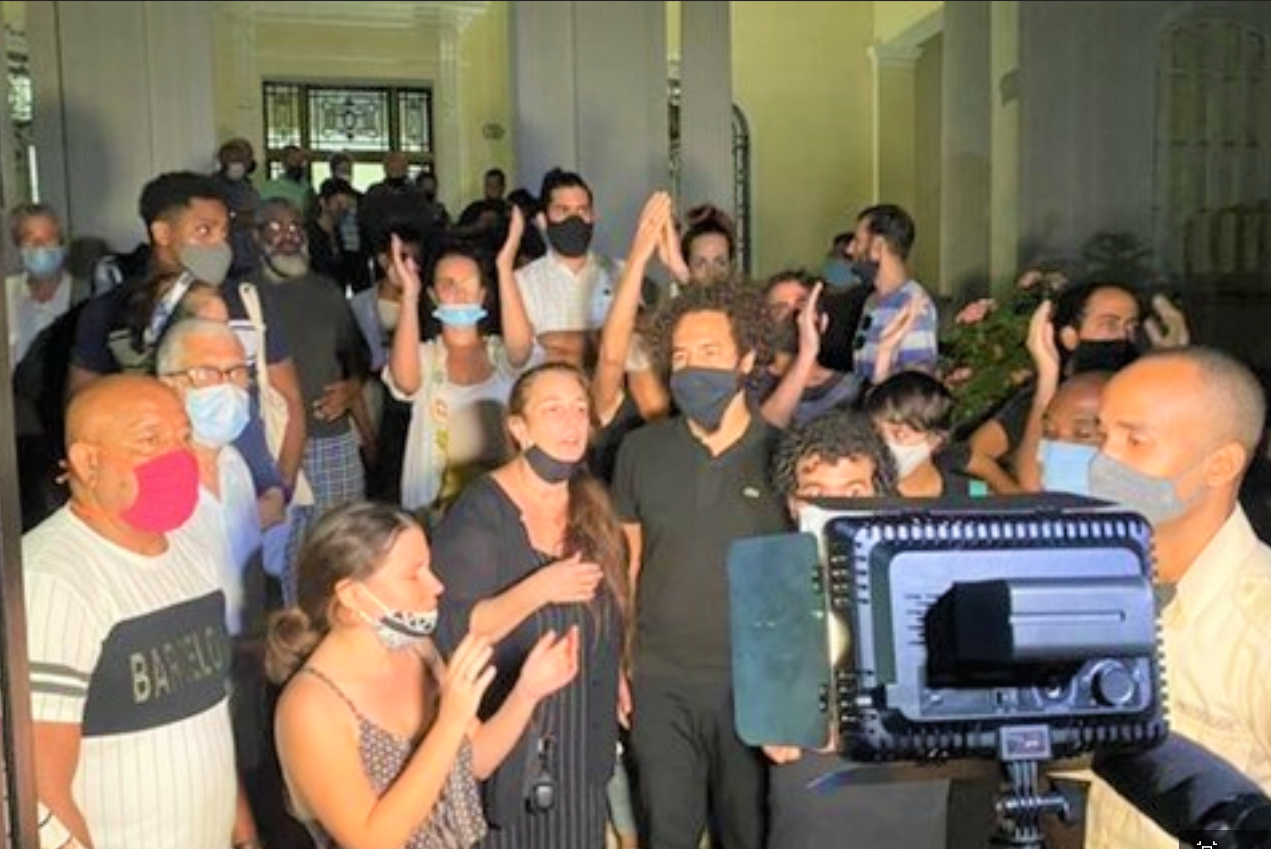 Cuban artists after the late-night encounter and initial accords for dialogue with the vice minister of culture Fernando Rojas early on November 27th. Photo: 14ymedio

HAVANA TIMES – The Ministry of Culture, announced today it would not honor its agreement for a dialogue with Cuban artists. The Communist Party currently carries out a massive media campaign to paint artists critical of government policy as “mercenaries”. They are also holding “seminars” at workplaces to reinforce the accusations.

The government had already backtracked in less than 24 hours on the other accords reached between the vice minister of Culture and hundreds of artists in the wee hours of November 27th. These included a truce in the harassment and criminalizing of independent artists and journalists, and police restrictions on their mobility.

The reasons for reneging on the agreements

The Ministry of Culture said today it would no longer meet with the artists. It alleged: “they have direct contacts and receive financing and logistical support from the US Government and its officials.”

Furthermore, the Ministry blames the artists for its backtracking on the dialogue for including participation of members of the San Isidro Movement (MSI).

It was that Movement, a week long hunger strike, and the nighttime State Security assault on their headquarters on November 26th, which led to a spontaneous day-night sit-in of hundreds of people from the Cuban cultural world the following day at the gates of the Ministry of Culture.

Late that night vice minister Fernando Rojas finally met with a delegation of 30 artists including some MSI members. To diffuse the tense moment, Rojas promised a dialogue for the coming week to discuss issues and concerns.

The Ministry statement published in the official press today justified their reneging on their promise. “The inclusion of persons who for a long time, have violated patriotic symbols, committed common crimes and made direct attacks on the Cuban Revolution under the guise of art, is what led to breaking off any possibility of dialogue.”

The Castro-Diaz Canel government maintains that any criticism of their policies, laws and leaders originates from the United States. According to them, no Cuban has a right to criticize a government that only acts to benefit the people. Furthermore, for decades they maintain that the US embargo is the cause of all their failed economic policies.

The Ministry said its doors were open, “as always”, to those artists who are not committed to the enemies of the Cuban nation.

Back in 1961, Fidel Castro set what is still government cultural policy. He said that all cultural expression that supports the Revolution would be permitted.  In official lingo, the Revolution, Communist Party, leaders and the government are all one and the same.