The EIU Index is about as rigorous as they come, including 60 indicators five general dimensions, namely electoral process and pluralism; civil liberties; the functioning of government; political participation; and political culture. The basic EIU definition of democracy and methodology is outlined below together with a description of the results for Latin America and a Table of the Latin American results. The Economist Intelligence Unit’s democracy index is based on five categories: electoral process and pluralism; civil liberties; the functioning of government; political participation; and political culture. The five categories are inter-related and form a coherent conceptual whole. The condition of having free and fair competitive elections, and satisfying related aspects of political freedom, is clearly the sine quo none of all definitions. All modern definitions, except the most minimalist, also consider civil liberties to be a vital component of what is often called “liberal democracy”. The principle of the protection of basic human rights is widely accepted. It is embodied in constitutions throughout the world as well as in the UN Charter and international agreements such as the Helsinki Final Act (the Conference on Security and Co-operation in Europe).

Basic human rights include the freedom of speech, expression and the press, freedom of religion; freedom of assembly and association; and the right to due judicial process. All democracies are systems in which citizens freely make political decisions by majority rule. But rule by the majority is not necessarily democratic. In a democracy majority rule must be combined with guarantees of individual human rights and the rights of minorities. Most measures also include aspects of the minimum quality of functioning of government. If democratically-based decisions cannot or are not implemented then the concept of democracy is not very meaningful or it becomes an empty shell. Democracy is more than the sum of its institutions. A democratic political culture is also crucial for the legitimacy, smooth functioning and ultimately the sustainability of democracy. A culture of passivity and apathy, an obedient and docile citizenry, are not consistent with democracy. The electoral process periodically divides the population into winners and losers. A successful democratic political culture implies that the losing parties and their supporters accept the judgment of the voters, and allow for the peaceful transfer of power.

Participation is also a necessary component, as apathy and abstention are enemies of democracy. Even measures that focus predominantly on the processes of representative, liberal democracy include (although inadequately or insufficiently) some aspects of participation. In a democracy, government is only one element in a social fabric of many and varied institutions, political organisations, and associations. Citizens cannot be required to take part in the political process, and they are free to express their dissatisfaction by not participating. However, a healthy democracy requires the active, freely chosen participation of citizens in public life. Democracies flourish when citizens are willing to participate in public debate, elect representatives and join political parties. Without this broad, sustaining participation, democracy begins to wither and become the preserve of small, select groups. At the same time, even our “thicker”, more inclusive and wider measure of democracy does not include other aspects–which some authors argue are also crucial components of democracy–such as levels of economic and social well being. Thus our Index respects the dominant tradition that holds that a variety of social and economic outcomes can be consistent with political democracy, which is a separate concept.

The Economist Intelligence Unit’s index of democracy, on a 0 to 10 scale, is based on the ratings for 60 indicators grouped in five categories: electoral process and pluralism; civil liberties; the functioning of government; political participation; and political culture. Each category has a rating on a 0 to 10 scale, and the overall index of democracy is the simple average of the five category indexes. The category indexes are based on the sum of the indicator scores in the category, converted to a 0 to 10 scale. Adjustments to the category scores are made if countries do not score a 1 in the following critical areas for democracy:

1. whether national elections are free and fair

2. the security of voters

3. the influence of foreign powers on government

4. the capability of the civil service to implement policies.  …..

Full democracies: Countries in which not only basic political freedoms and civil liberties are respected, but these will also tend to be underpinned by a political culture conducive to the flourishing of democracy. The functioning of government is satisfactory. Media are independent and diverse. There is an effective system of checks and balances. The judiciary is independent and judicial decisions are enforced. There are only limited problems in the functioning of democracies.

Flawed democracies: These countries also have free and fair elections and even if there are problems (such as infringements on media freedom), basic civil liberties will be respected. However, there are significant weaknesses in other aspects of democracy, including problems in governance, an underdeveloped political culture and low levels of political participation.

Hybrid regimes: Elections have substantial irregularities that often prevent them from being both free and fair. Government pressure on opposition parties and candidates may be common. Serious weaknesses are more prevalent than in flawed democracies–in political culture, functioning of government and political participation. Corruption tends to be widespread and the rule of law is weak. Civil society is weak. Typically there is harassment of and pressure on journalists, and the judiciary is not independent.

Authoritarian regimes: In these states state political pluralism is absent or heavily circumscribed. Many countries in this category are outright dictatorships. Some formal institutions of democracy may exist, but these have little substance. Elections, if they do occur, are not free and fair. There is disregard for abuses and infringements of civil liberties. Media are typically state-owned or controlled by groups connected to the ruling regime. There is repression of criticism of the government and pervasive censorship. There is no independent judiciary.

There was little change in this region between 2010 and 2011. The average score for the region declined slightly in 2011 as rampant crime in some countries—in particular, violence and drug-trafficking—continues to have a negative impact. In most countries free and fair elections are now well established. The recent evidence from surveys on attitudes towards democracy is mixed. In some countries, surveys indicate a slow shift in public attitudes on many issues in a direction that is conducive to democracy. However, a recent UNDP report (UNDP 2011) found that the sustainability of democracy in Latin America is being endangered by the concentration of power, the world´s highest social and economic inequalities, and mounting insecurity and violence. While most Latin American countries (14 out of 24) fall within the flawed democracy category, there is wide diversity across the region. For example, Uruguay is a full democracy with an index score of 8.17 (out of 10) and a global ranking of 17th, while Cuba, an authoritarian regime, ranks 126th.

Central American and Caribbean sub-regions hit particularly badly—most countries avoided social unrest and a rolling back of democracy. However, a key issue that is undermining democracy in much of the region is an upsurge in violent crime, linked in large part with the drug trade. The corrupting influence of organised crime and its ability to undermine the effectiveness of the security forces and the judicial authorities are a serious problem.

Electoral democracy, for the most part, remains firmly entrenched in Latin America, but media freedoms have been eroded in recent years in several countries. Aside from Cuba (the only state in the region without any independent media), Venezuela has been the worst offender. The failure to uphold press freedom in some countries in the region in part reflects inadequate oversight bodies—a symptom of broader institutional weaknesses in Latin America. The executive remains very strong in many countries, the legislature is comparatively weak in many cases and most judiciaries suffer from some degree of politicization. 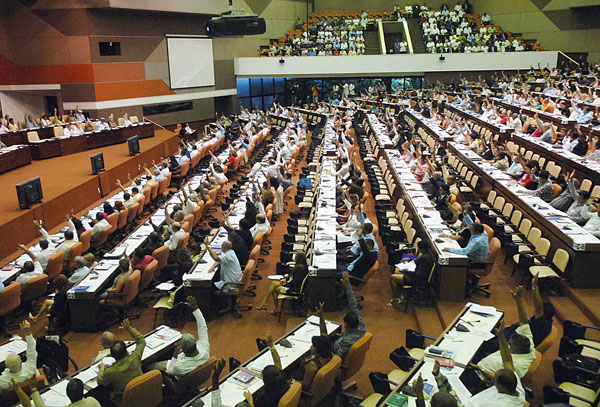