CUBA AND THE ART OF THE DEAL

Tough talk is cheap, but at the end of the day, you have to deliver the goods. 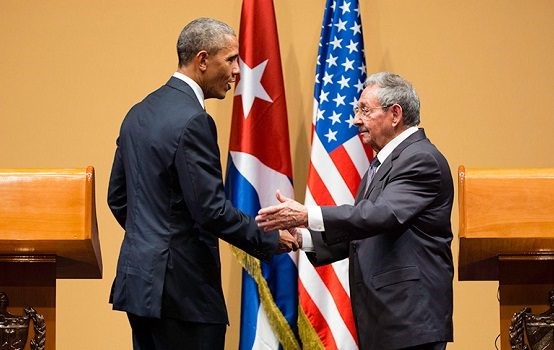 One of the main criticisms of President Barack Obama’s opening to Cuba is that he did not extract any concessions from Raúl Castro on human rights—a criticism amplified whenever Cuban police break up a dissident meeting or demonstration. But making quid pro quo human-rights demands would have been a non-starter, just as it has been for the past 58 years. That approach would have made it impossible for the United States and Cuba to reach agreements on prisoner exchanges, diplomatic relations, and cooperation on issues of mutual interest.

Cuba always rejects such quid pro quo conditions, fearful that any concession will be interpreted as a sign of weakness. It’s a negotiating style that President Donald Trump will understand. “The worst thing you can possibly do in a deal is seem desperate to make it,” he wrote in The Art of the Deal. “That makes the other guy smell blood, and then you’re dead. The best thing you can do is deal from strength.”

The idea that the best way to support a political opening in Cuba is for the United States to demand human-rights concessions as a condition of engagement is not just a bad negotiating strategy. It also represents a fundamental misunderstanding of how the United States can most effectively influence Cuba’s political future. Although Cuban leaders have always defiantly rejected direct U.S. demands, they change their behavior of their own accord when it serves their interests. In 1978, for example, knowing that human rights were a priority for President Jimmy Carter, Fidel Castro released 3,000 Cuban political prisoners in hopes of improving relations with Washington.

The U.S. policy of engagement follows a similar logic: rather than make demands Cuba is sure to reject, engagement aims to create conditions that provide Cuban leaders with self-interested reasons to allow greater political and economic freedom. Cuba’s interest in normalizing relations with the United States is economic—that’s what Mr. Trump calls leverage. Building bilateral economic ties creates the incentive for Cuba to maintain an open flow of people and ideas, and to be more responsive to U.S. concerns on a whole range of issues, including human rights.

Engagement also gives U.S. diplomats greater opportunities to interact with Cuban civil society, including dissidents, and to travel around the island to assess conditions outside Havana and verify Cuban compliance with 1995 migration accord that prohibits persecution of illegal migrants returned to Cuba. In addition, U.S. and Cuban officials now have a human-rights dialogue in which broad issues and specific cases can be raised directly—something that did not exist before. Backpedaling on engagement would reverse these important gains.

As the Department of State’s 2016 human-rights report documents, the U.S. and Cuban conceptions of human rights are far apart. Of particular concern to Washington is the arbitrary short-term detention of Cuban dissidents (a practice that has largely replaced the long prison sentences previously handed out). The fact that the number of detentions in the last four months is half of what it was in the first eight months of 2016 (down from an average of 913 per month to 444 according to the Cuban Commission for Human Rights and National Reconciliation) does not excuse the mistreatment of people trying to peacefully exercise rights guaranteed under Cuba’s constitution. But neither should the harassment of dissidents obscure the progress in other areas, including the expansion of public space for civil discourse, increased access to information, and the growth of the private sector.

When Raúl Castro called for more open debate about Cuba’s problems in 2012, Cuban intellectuals launched spirited discussions, at first in print journals and magazines like Espacio Laical, Vitral, and Palabra Nueva, produced by the Catholic Church, and Revista Temas, a journal of social and cultural criticism that tackles sensitive topics like inequality, racial discrimination, the role of religion, and the nature of socialist democracy. Even the official newspaper Juventud Rebelde began conducting investigative reports of official malfeasance and corruption.

As internet access and cell-phone availability have expanded, these discussions have moved online. More and more Cubans have access to new sources of digital information and connect with one another via social media. Blogs and digital journalism have appeared—dissident, officialista, and everything in between—engaging in debates and polemics in the expanding digital town square.

While internet access in Cuba continues to be limited, Freedom House, a staunch critic of human-rights abuses on the island, acknowledges that access has improved (albeit slowly) since 2013. Their annual “Freedom of the Net” report shows that Cuba has made progress on all indicators of internet freedom—internet penetration, obstacles to access, limits on content, and violation of the rights of users.

Since the summer of 2015 the Cuban government has established over 328 public wi-fi hotspots for Cuban users, and in December of 2016 Cuban officials signed an agreement with Google to improve internet speed on the island. At the same time, Cuba’s state-owned telecom company launched a pilot program to expand home internet access starting in Old Havana. It also lowered the price of internet access by 25 percent, thereby reducing one of the main obstacles to greater connectivity. The government plans to provide internet access to 50 percent of the population and mobile-telephone services to 60 percent by 2020. Increased access is helping reunite families, increasing information flows, creating new venues for public debate, and supporting the Cuban private sector.

Expanded travel also fosters the exchange of ideas. The policy of engagement has stimulated a rush of U.S. visitors to Cuba—almost 300,000 in 2016, a 74 percent jump from the year before—in addition to the 330,000 Cuban Americans who traveled to the island to visit family. Engagement has also brought Cubans to the United States—scientists, journalists, artists, and students. Some 40,000 them visit the United States annually on non-immigrant visas. These exchanges are possible because the U.S. government relaxed restrictions on travel to Cuba to encourage people-to-people engagement, and the Cuban government lifted the requirement that Cubans get its permission before traveling abroad.

Equally important, though it gets less attention, is how engagement fosters greater economic freedom. In recent years, Cubans have enjoyed new opportunities to open small private businesses and cooperatives, and they’ve rushed to take advantage of it. The number of private businesses has increased more than 300 percent in the past six years, and the private sector’s share of the labor force has expanded to 28 percent, with plans to reach as much as 50 percent in the future. Most of the seed capital fueling this entrepreneurial boom comes from remittances that Cuban Americans send to relatives on the island, and the supply chains for many of these new businesses reach back to south Florida. These linkages are a direct result of U.S. engagement. That’s why more than 100 Cuban private entrepreneurs wrote a letter to President Trump asking him not to abandon them by cutting off those lifelines.

In short, U.S. engagement with Cuba is fostering and reinforcing positive developments on human rights in myriad ways, expanding the flow of information, ideas, people, and capital—all of which nurture Cuba’s expanding public discourse and vibrant entrepreneurial sector.

After the U.S. election, President-elect Trump declared he wanted a new deal with Cuba that was good for the Cuban people, Cuban Americans, and the United States. A return to the policy of hostility fails that test because Cuba will predictably respond just as Donald Trump himself advises: when attacked, “Fight back: Always hit back against critics and adversaries,” harder than they hit you. That leads to a dead end of perpetual antagonism. On the other hand, a policy of engagement built on the bedrock of everyone’s self-interest will produce the best deal possible and set the stage for even better ones in the future. Tough talk is cheap, but at the end of the day, as The Art of the Deal notes, you have to “deliver the goods.”

William M. LeoGrande is professor of government at American University in Washington, DC. Marguerite Rose Jiménez is the senior associate for Cuba at the Washington Office on Latin America.