CUBA’S ECONOMY WAS HURTING. THE PANDEMIC BROUGHT A FOOD CRISIS.

The island was able to control the coronavirus, but the dearth of tourists in the pandemic’s wake strangled an economy already damaged by mismanagement and U.S. sanctions.

By Ed Agustin and Frances Robles

HAVANA — It was a lucky day for the unemployed tourism guide in Havana.  The line to get into the government-run supermarket, which can mean a wait of eight or 10 hours, was short, just two hours long. And better yet, the guide, Rainer Companioni Sánchez, scored toothpaste — a rare find — and splurged $3 on canned meat.

“It’s the first time we have seen toothpaste in a long time,” he said, sharing the victory with his girlfriend. “The meat in that can is very, very expensive, but we each bought one simply because sometimes in an emergency there is no meat anywhere.” 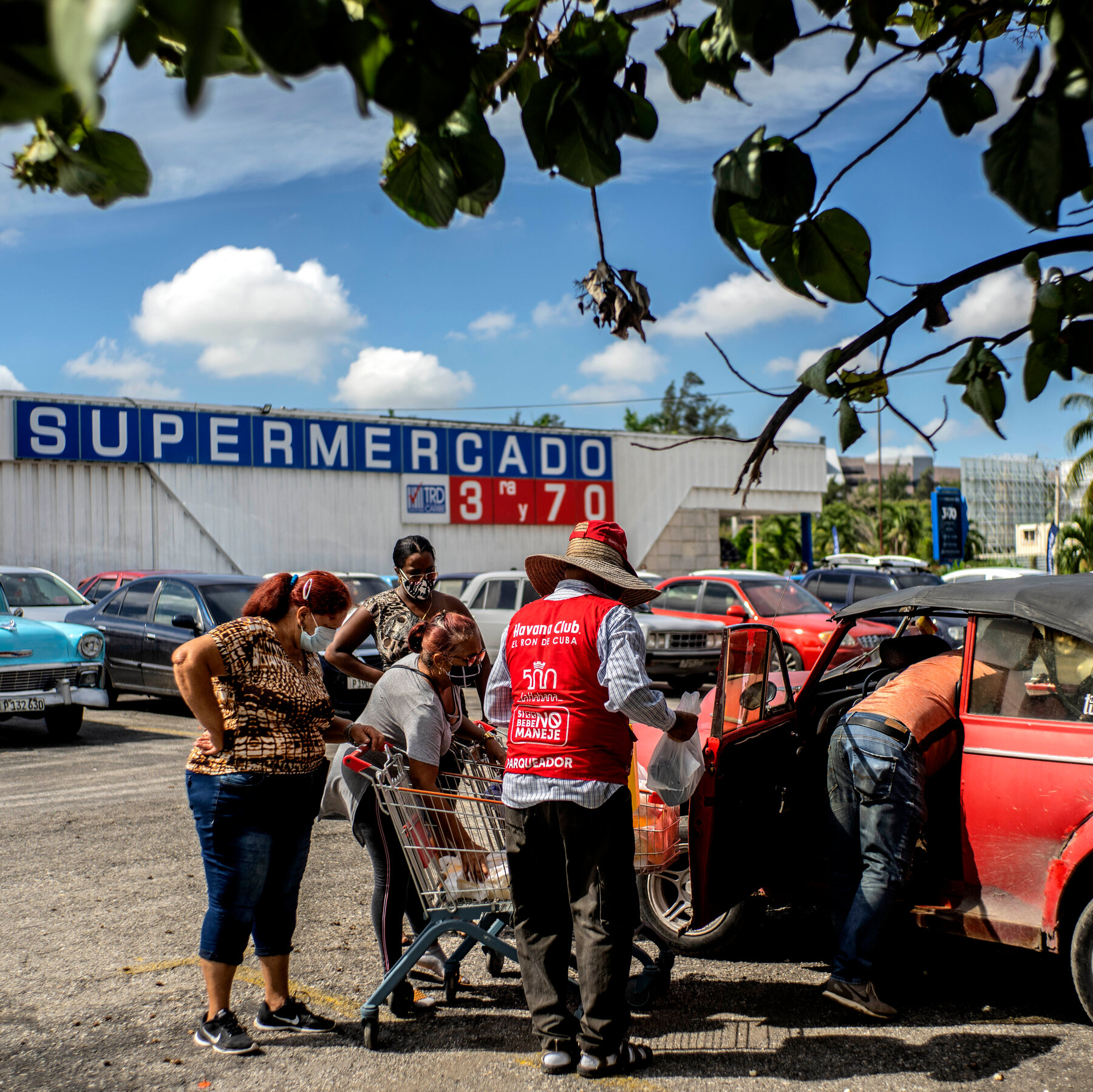 Cuba, a police state with a strong public health care system, was able to quickly control the coronavirus, even as the pandemic threw wealthier nations into crisis. But its economy, already hurting from crippling U.S. sanctions and mismanagement, was particularly vulnerable to the economic devastation that followed.

As nations closed airports and locked down borders to combat the spread of the virus, tourist travel to Cuba plummeted and the island lost an important source of hard currency, plunging it into one of the worst food shortages in nearly 25 years.

What food is available is often found only in government-run stores that are stocked with imports and charge in dollars. The strategy, also used in the 1990s, during the economic depression known as the “special period,” is used by the government to gather hard currency from Cubans who have savings or get money from friends or relatives abroad.

Even in these stores, goods are scarce and prices can be exorbitant: That day, Mr. Companioni couldn’t find chicken or cooking oil, but there was 17-pound ham going for $230 and a seven-pound block of manchego cheese with a $149 price tag.  And the reliance on dollar stores, a move intended to prop up the socialist revolution in a country that prides itself on egalitarianism, has exacerbated economic inequality, some Cubans say.

“This is a store that charges in a currency Cubans do not earn,” said Lazaro Manuel Domínguez Hernández, 31, a doctor who gets cash from a friend in the United States to spend at one of the 72 new dollar stores. “It kind of marks the difference in classes, because not everyone can buy here.”

He left the Puntilla supermarket with a cart full of fruit cocktail, cheese and chocolate biscuits that he loaded into a 1950s Dodge taxi.

Cuba’s economy was struggling before the coronavirus. The Trump administration has worked hard to strengthen the decades-old trade embargo, going after Cuba’s sources of currency. It also imposed sanctions on tanker companies that delivered petroleum to Cuba from Venezuela and cut back on the commercial flights from the United States to the island.

Last month, Secretary of State Mike Pompeo announced an end to charter flights, too. After the Cuban state energy company Corporación Panamericana faced sanctions, even cooking gas rations had to be reduced.  Then Covid-19 put a stop to tourism. Remittances sent by Cubans who live abroad began to dry up as the illness led to huge job losses in the United States.

That left the Cuban government with far fewer sources of revenue to buy the products it sells in state-run stores, leading to shortages of basic goods throughout the island. Earlier this year, the government warned that personal hygiene products would be hard to come by.

Cuba is facing “the triple threat of Trump, Venezuela and then Covid,” said Ted A. Henken, a professor at Baruch College and a co-author with A. Ritter of the book “Entrepreneurial Cuba.”   “Covid was the thing that pushed them over the edge.”

The pandemic, and the recession that followed, pushed the government to announce that, after years of promises, it would make good on a series of economic reforms intended to stimulate the private sector.

The Communist Party said in 2016 that it would legalize small and medium-size private businesses, but no mechanism was ever set up to do so, thus business owners are still unable to get financing, sign contracts as a legal entity or import goods. Now, that is expected to change, and more lines of work are expected to be legalized, although details have not been announced.

Cuba also has a history of offering reforms only to rescind them months or years later, entrepreneurs said.  “They go back, go forward, then back again,” said Marta Deus, the co-founder of a business magazine who owns a delivery company. “They need to trust the private sector for all its capacity to provide for the future of the economy. We have big ideas.”

The government puts the blame for the current situation squarely on Washington.  “Why can’t we export what we want? Because every time we export to someone, they try to cut off that export,” President Miguel Díaz-Canel said of the United States in a speech this summer. “Every time we are trying to manage a credit, they try to take away our credit. They try to prevent fuel from reaching Cuba. And then we have to buy in third markets, at higher prices. Why is it not talked about?”

Mr. Díaz-Canel stressed that despite the hardships, Cuba still managed a successful battle against the coronavirus: The health system did not collapse, and, he said, no children or medical professionals died of the disease.

With 11.2 million people, Cuba had just over 5,000 coronavirus cases and 115 deaths by Friday, one of the lowest mortality rates in the world. By comparison, Puerto Rico, with 3.2 million people, had five times as many deaths.

People who tested positive in Cuba were whisked away to the hospital for two weeks — even if they were asymptomatic — and their exposed contacts were sent to isolation for two weeks. Apartment buildings, and even entire city blocks, that saw clusters were closed to visitors.

Anyone flying in after March also had to isolate in quarantine centers, and medical students went door to door to screen millions of people daily. Masks are mandatory, and the fines for being caught without one are stiff.

With international flights at a virtual standstill, immigration officers are now assigned to stand guard outside quarantined apartment buildings, making sure no one goes in or out 24 hours a day.

At a quarantined building in Boyeros, a neighborhood near the Havana airport, an immigration officer sat in the shade while messengers and family members of those inside dropped off food. Daniela Llanes López, 21, left vegetables for her grandfather, who was stuck inside because five people in his building had tested positive.

“In Cuba, I don’t know anyone who knows anyone who got the coronavirus,” said Ms. Llanes, who studies German at the University of Havana, noting that she does know people in Germany who contracted the illness.

The strategies worked, although when the authorities started lifting restrictions in July, opening beaches, bars and public transportation, the nation’s capital saw an uptick in cases and a curfew was imposed there.

“Cuba is good in crisis and good in preventive health care,” said Katrin Hansing, a professor at Baruch College who spent the peak of the pandemic in lockdown in Cuba. Support for the government was notable, she said; even if the store lines were long, people felt safe from the virus.

Many Cubans are now hoping the economic reforms will stimulate the private sector and allow independent business operators to kick-start the economy.

Camilo Condis, an electrical contractor who has been out of work for months, said the changes must come quickly, and must allow Cuba to function, whether the United States is under a second Trump presidency, or under Joe Biden.  “Like we private business owners say here: ‘All I want is for them to let me work,’” he said. 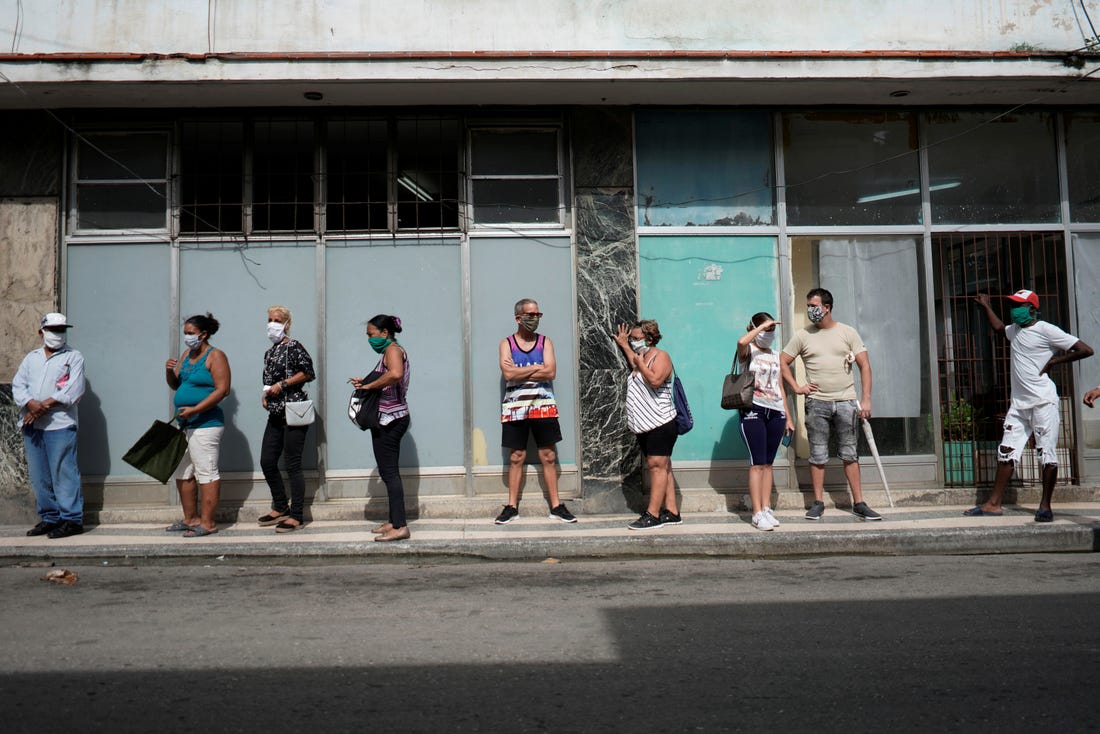