Cuban police arrested dozens of dissidents Tuesday after the funeral of Oswaldo Paya, a political activist whose sudden death in a road accident triggered grief and suspicion, AFP reporters said. Those arrested included Guillermo Farinas, a leading rights activist, who was held for questioning by plainclothes police deployed outside the Havana church where Paya’s funeral was held. 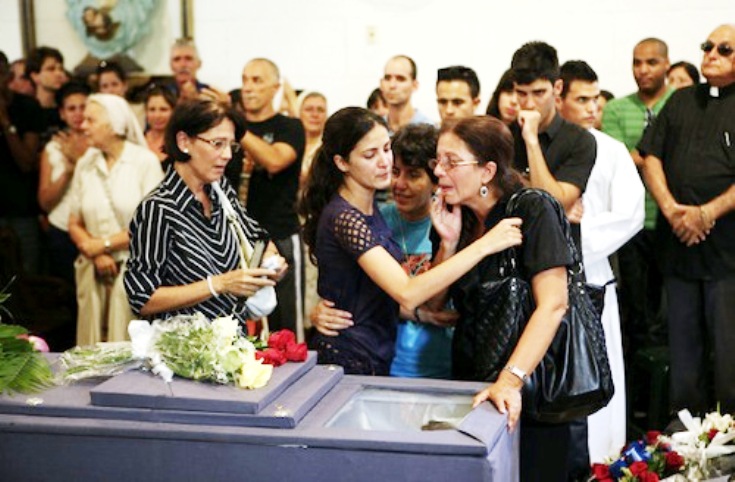 At the Funeral of Oswaldo Paya

Farinas, known for hunger strikes that drew attention to the plight of political prisoners in Cuba, and about 50 others were stopped by police after emerging from the funeral mass shouting slogans against the government.

They were forced onto two buses that the church had provided to take people to the cemetery where Paya was to be buried.

Two of Paya’s children have questioned the official account of how their father was killed.

Authorities said Paya, 60, died along with another dissident, Harold Cepero Escalante, on Sunday when their rental car went off the road and struck a tree in southeastern Cuba.

Separately, a Spanish national who was driving the car in which Paya was killed was taken into custody by Cuban police for questioning after being released from a Havana hospital on Monday, a Spanish embassy source said.

The source said Angel Carromero Barrios, a 27-year-old activist with the youth wing of Spain’s ruling Popular Party, was being held in Bayamo, 744 kilometers (462 miles) southeast of Havana.

“He is still in Bayamo, in a detention center,” the source said.

A Swede, 27-year-old Jens Aron Modig, also was in the car at the time of the crash. He was treated at a local hospital and released. The Swedish embassy would not comment on his situation.

Paya, winner of the European Union’s Sakharov prize for human rights in 2002, is best known for confronting the Cuban parliament that year with a petition signed by 11,000 people demanding political change in Cuba.

Known as the “Varela Project,” the initiative was instrumental in opening debate in Cuba on the direction of a communist regime dominated for more than half a century by Fidel Castro and his brother Raul.

Paya was eulogized Tuesday by Cardinal Jaime Ortega, the archbishop of Havana and a key intermediary with Cuba’s ageing leadership, as a man whose political activism was rooted in his Christian faith.

“Oswaldo had a clear political vocation and, as a good Christian, this did not distance him from his faith or religious practice,” Ortega said.

“On the contrary, he always looked to his Christian faith as inspiration for his political options.”

His death brought a flood of reaction praising his courage and dedication to human rights.

Pope Benedict XVI extended condolences to Paya’s family in a statement that Ortega read at the funeral service.

In Chile, two lawmakers complained that they had been denied visas to attend Paya’s funeral. Senator Patricio Walker and congressman Juan Carlos Latorre, both members of Chile’s Christian Democratic party, had applied for the visas Monday at the Cuban consulate in Santiago.

“They had given me the visa, the truth is I was bit surprised,” Walker told reporters. “The consul called me and said that it was a mistake, that tourist visas could not be given to holders of diplomatic passports.”