Pravda: “Russia to write off $35 billion of Cuba’s debt” 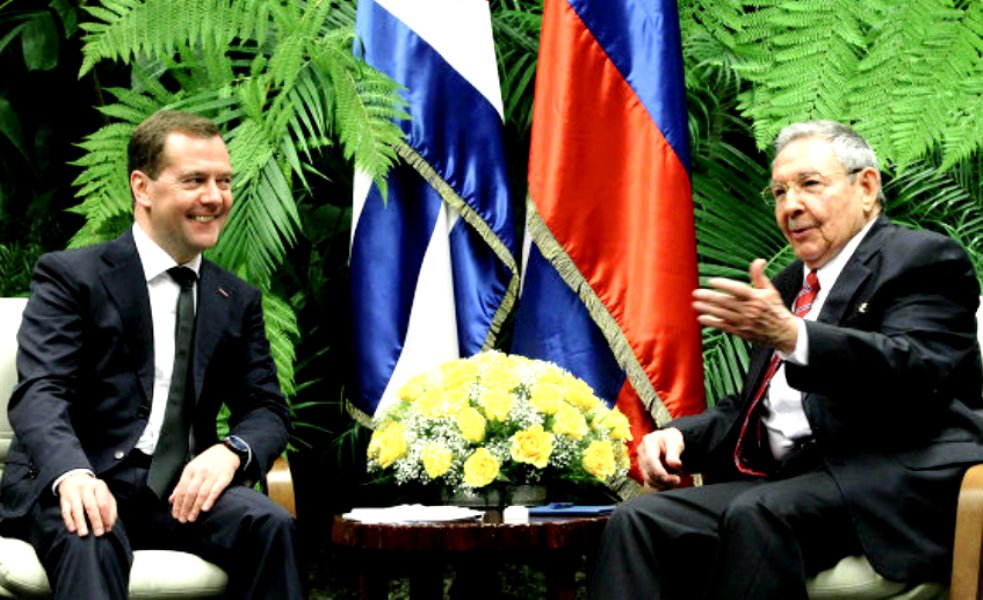 Russia and Cuba have initialed an agreement to settle Cuba’s debt to Russia on the loans that Cuba took from the Soviet Union. In addition, representatives of the two countries signed two agreements on the deliveries of Russian aircraft to Cuba in the amount of $650 million.

The initialed agreement “sets the general direction for further work”, a high-ranking source in the Russian delegation told Itar-Tass. The agreement was signed by Deputy Foreign Minister Sergei Ryabkov and Deputy Chairman of the Council of Ministers, Ricardo Cabrisas.

“This document is like a declaration of political will, and it sets off extensive work, which will consist of three stages,” said the official.

“The document goes through internal procedures and coordination. Afterwards, there will be another agreement signed – the new one will contain all specifications of all the technical details, and then it will have to be ratified,” he explained. According to the official, it is a very substantial amount of debt – $35 billion.

The final agreement on writing off the debts of Cuba will be prepared within six months, Minister for Industry and Trade, Denis Manturov, told reporters after the Russian-Cuban talks.

“More than $30 billion – this is the total amount of debt that will be partially written off and partially refinanced, – said the minister. – So today it is still early to talk about the precise proportions. We have to coordinate all procedures inside the countries first before we sign the final agreement, which will take effect and determine the amounts and proportions of restructuring and writing-off the debt.”

The minister assured that it will happen “before the end of the year for sure.” “I think that the term that we have agreed on – six months – will be enough to finalize the formalities,” he added.

The total volume of two agreements about the supplies of Russian planes to Cuba is $650 million, the head of the Russian Ministry of Industry said. “In total, the amount for the supply of aircraft is 650 million dollars, – he said. – This includes two agreements for three Antonov aircraft (AN-158), three Ilyushin (IL-96-400) and two Tupolev airplanes (Tu-204SM).”

Following the talks, an option agreement was signed for the supply of three An-158 airplanes. Manturov explained that these would be delivered to Cuba in addition to those that Cuba would receive this year.

In addition, the agreements, according to Manturov, stipulate for the delivery of complete sets of spare parts to maintain the operation of the aircraft, which Cuba uses already. Manturov added that all aircraft would be delivered as part of financial leasing procedures.

The Russian delegation, led by Prime Minister Dmitry Medvedev, arrived on a work visit to Cuba from Brazil, where the head of the Russian government held talks with the leadership of the republic and took part in the meeting of the bilateral high-level commission on cooperation.

Following the results of Medvedev’s official meetings in Cuba, a number of bilateral documents is expected to be signed. On Friday, the Prime Minister will visit the 22nd Havana International Book Fair, which takes place in the Cuban capital every year.

The current fair is dedicated to the 160th anniversary of the birth of Cuban revolutionary Jose Marti. Medvedev will lay flowers to his monument as part of the traditional protocol ceremony.

The flight to Cuba marked the middle of Medvedev’s Latin American tour. The prime minister crossed seven time zones on the way from Moscow to Brasilia, making a technical refueling stop in Cape Verde. As a result, Medvedev spent more than 14 hours in the air. The trip to Cuba added two time zones to this route and a seven-hour flight.

Due to the nine-hour time difference between Havana and Moscow, even morning events in Medvedev’s Cuban work schedule fall for the evening time in Moscow.