[A useful and bi-partisan summary of US policy towards Cuba that I missed when it came out in May 2020.  Thanks to Mike Wiggin, of Ottawa Canada, for bringing it to my attention.] 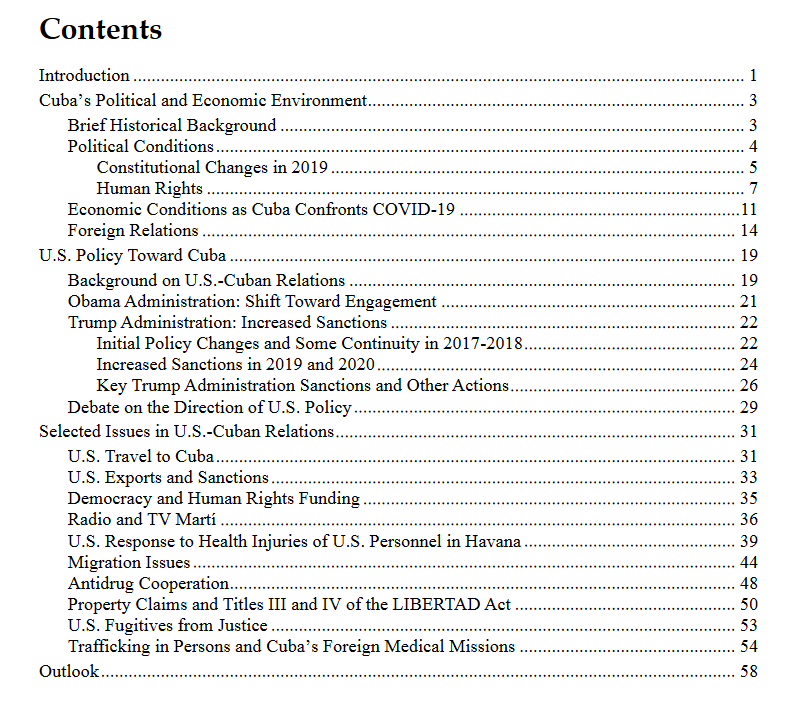 Political and economic developments in Cuba, a one-party authoritarian state with a poor human rights record, frequently have been the subject of intense congressional concern since the1959 Cuban revolution.

Current Cuban President Miguel Díaz-Canel succeeded Raúl Castro in April 2018, but Castro continues to head Cuba’s Communist Party. A new constitution took effect in 2019 that introduced some political and economic reforms but maintained the state sector’s dominance over the economy and the Communist Party’s predominant role.

Over the past decade, Cuba has implemented gradual market-oriented economic policy changes, but it has not taken enough action to foster sustainable economic growth. The Cuban economy is being hard-hit by Venezuela’s economic crisis, which has reduced Venezuela’s support for Cuba and increased U.S. economic sanctions, and by the economic shutdown in response to the Coronavirus Disease 2019 (COVID-19) pandemic. Cuba’s economy faces a contraction of more than 8% in 2020. The global contraction in economic growth, trade, foreign investment, and tourism likely will slow post-COVID economic recovery.

Since the early 1960s, the centerpiece of U.S. policy toward Cuba has been economic sanctions aimed at isolating the Cuban government. Congress has played an active role in shaping policy toward Cuba, including by enacting legislation strengthening, and at times easing, U.S. economic sanctions. In 2014, however, the Obama Administration initiated a policy shift away from sanctions and toward a policy of engagement. This shift included the restoration of diplomatic relations (July 2015); the rescission of Cuba’s designation as a state sponsor of international terrorism (May 2015); and an increase in travel, commerce, and the flow of information to Cuba implemented through regulatory changes.

In 2017, President Trump unveiled a new policy toward Cuba that introduced new sanctions and rolled back some of the Obama Administration’s efforts to normalize relations. In September 2017, the State Department reduced the staff of the U.S. Embassy by about two-thirds in response to unexplained health injuries of members of the U.S. diplomatic community in Havana. The reduction affected embassy operations, especially visa processing.

In November 2017, the State Department restricted financial transactions with over 200 business entities controlled by the Cuban military, intelligence, and security services; the so-called restricted list has been updated several times, most recently in November 2019.

Legislative Activity in the 116thCongress

When Miguel Díaz-Canel succeeded Raúl Castro as president in April 2018, a leader from a new generation came to power—Díaz-Canel currently is 60 years old. Nevertheless, Raúl Castro, currently 88 years old, will remain until 2021 in the politically influential position of first secretary of Cuba’s Communist Party.

In February 2019, almost 87% of Cubans approved a new constitution in a national referendum, which included such changes as the addition of an appointed prime minister to oversee government operations; limits on the president’s tenure (two five-year terms) and age (60, beginning first term); and market-oriented economic reforms, including the right to private property and the promotion of foreign investment. The new constitution also ensures the state sector’s dominance over the economy and the predominant role of the Communist Party.

In 2019, pursuant to the new constitution, Cuba’s National Assembly appointed Díaz-Canel as president in October, and Díaz-Canel appointed Tourism Minister Manuel Marrero Cruz as prime minister in December. Further implementation of constitutional reforms could be delayed as Cuba confronts the COVID-19 pandemic.

The Cuban economy is being been hard-hit by the government’s economic shutdown to stem the COVID-19 pandemic; some observers project a contraction of more than 8% for the Cuban economy in 2020. Moreover, Cuba’s economic recovery is likely to be slow because of the global economic outlook for trade, investment, and tourism. In this environment, reduced support from Venezuela and increased U.S. economic sanctions, which already were negatively affecting the economy, will contribute to Cuba’s bleak future economic prospects.

The Trump Administration’s ramped-up sanctions on Cuba in 2019, aimed at deterring Cuba’s support for Venezuela, have heightened tensions in relations, stymied U.S. business engagement in Cuba, and negatively affected Cuba’s nascent private sector. The 2017 downsizing of the staff at the U.S. Embassy in Havana, done in response to unexplained injuries to U.S. diplomatic personnel in Cuba, resulted in the suspension of most visa processing at the embassy and reduced other embassy operations.

As in past Congresses, there are diverse opinions in the 116th Congress regarding the appropriate U.S. policy approach toward Cuba, with some Members supporting the Administration’s actions and others preferring a policy of engagement.  Although various legislative initiatives have been introduced to ease or lift various U.S. sanctions, no action has been taken on these measures. With the exception of congressional opposition to funding cuts for Cuba democracy programs and Cuba broadcasting in annual appropriations measures, no congressional action has been taken opposing the Administration’s imposition of various sanctions on Cuba.