The updated Cuba Standard Economic Trend Index (CSETI) through March 2017 continues to show a negative trend, which suggests a continued worsening of balance-of-payment problems in the Cuban economy.

News surfaced that confirm the government’s intentions about accelerating the opening towards foreign direct investment. Five new projects were approved for the Mariel Zone. The Food Industry and the Tourism Ministry announced upcoming projects with foreign investors. But the reform is still frozen. The government seems to have no new ideas about how to boost agriculture. Consensus seems to be moving towards a very critical assessment of the reforms. The modus “without haste, but without pause” didn’t really work.

Two favorable news in financial terms during the first quarter have been the beginning of operations of a fund equivalent to $300 million to back up the operations of Spanish enterprises in Cuba, and a similar one by Russia. The official announcement by the Central American Bank for Economic Integration (CABEI) to welcome Cuba as a member can also be considered good news. It has symbolical value because it shows the willingness of the Cuban government to join international multilateral financial institutions.

The Cuban financial crisis will continue in 2017, although it is not expected to worsen, given the perspective of higher international prices for oil and Cuban exports, sustained tourism growth, and the increase in foreign investment.

The Cuban authorities have yet to publish national account data for 2016, and there is not a single piece of official information available about the economic situation in 2017. Based on data we can estimate and the results of the two indexes we calculate, we still forecast GDP growth for 2017 within a range between -1.4% and -0.3%. We continue to perceive the net balance as pointing towards recession

Given the recession forecasts for the Venezuelan economy in 2017, a general and significant recovery of trade between the two countries is improbable. Revenues from medical services and oil shipments from Venezuela will continue under great strain, although there could be some moderate increase of both flows in nominal terms.

The final result of the Cuban GDP in 2017 depends in great measure on what happens with the oil price. Even without being an oil country, the Cuba economy has become vulnerable to changes in the international oil price, due to its close relations and special agreements with Venezuela. The oil price drop has led to a drop in medical of professional service exports to Venezuela, because of an indexation mechanism between the latter and the crude oil price. The correlation between total medical and professional service exports (to Venezuela and other countries) and the international oil price is 66% in the 2005-2016 period. 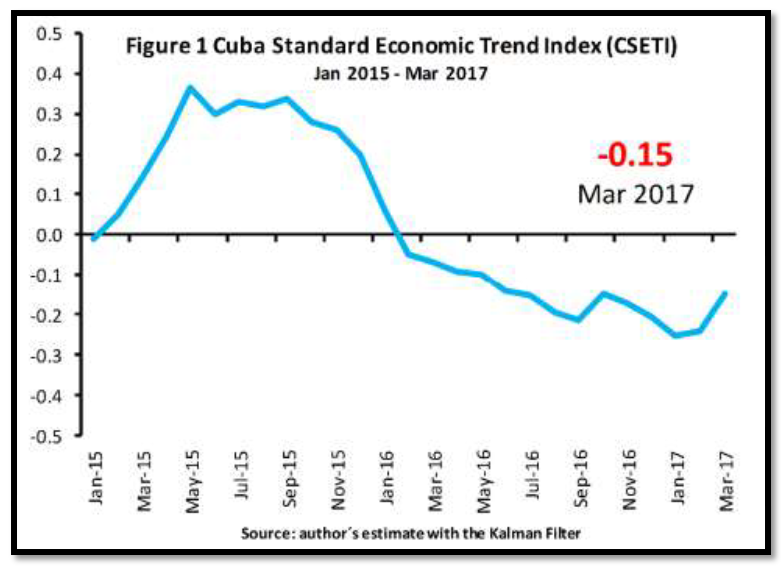 The CSETI allows the anticipation of Cuban GDP growth statistics. In total, the index counts with 28 variables taken on a monthly base from January 1998 to the present. It includes information on real exports and imports of the 10 leading trade partners, it retrieves data on nickel, sugar, oil and food prices, and it approximates real external financial flows, as well as the dependency on Venezuela. The Kalman Filter econometric technique used in the index allows estimating a common component of the evolution of the 28 variables. This signal contained in the combination of the 28 variables draws together the state of the economy every month. Values above (below) zero indicate favorable (unfavorable) conditions in balance of payments for GDP growth.