The new Havana embassy is the last big move left for the White House to make. Any progress after this won’t be so easy. 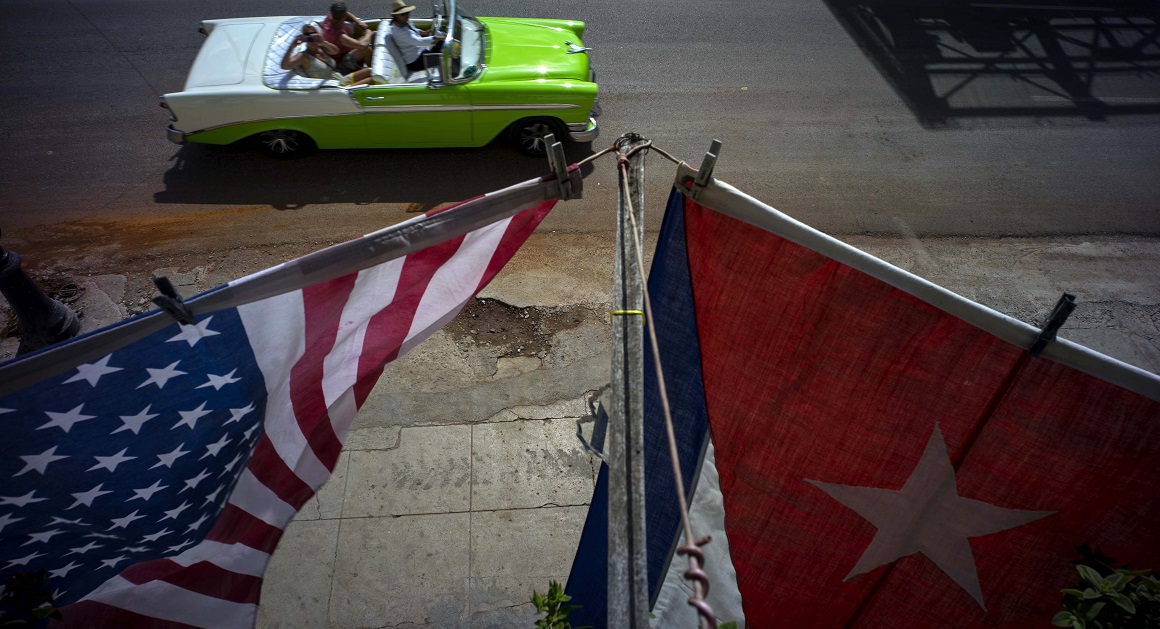 In 1961, Washington severed diplomatic relations with Havana. More than 50 years later, embassies in Washington and Havana have officially reopened. And today, Secretary of State John Kerry travels to Havana to raise the American flag over the embassy.

The flag is a powerful symbolic gesture, widely seen as the opening of a new chapter in the complicated, tense relationship between the U.S. and one of its nearest neighbors.

But in the messy universe of Cuban politics and policy, there’s another way to look at it. At least for the short term, Kerry’s ceremony is as likely to be the end of something as the beginning.

Since last December, when President Barack Obama and President Raúl Castro announced that they would lead the two countries toward bilateral normalization, events have moved at light speed, at least by diplomatic standards. We’ve had new regulations passed, prisoners released on both sides, and formal channels open for diplomatic negotiations. The Obama administration removed Cuba from the U.S. Government’s list of state sponsors of terrorism. Travel, money transfers, and bilateral interactions are all easier than at any point since the Cuban Revolution.

A lot has been achieved in very little time, and it’s easy to imagine that the change will only snowball. But so far the momentum has come almost entirely from the White House, and the newly opened embassies mark the final big step that Obama can take by himself. Reopening the embassies, as well as taking Cuba off of the list of terrorist sponsoring countries, were decisions that resided within the jurisdiction of the executive branch. Now the most significant next steps are going to lie with Congress, and get tangled up in the 2016 presidential race. They won’t be so easy.

The issues now hanging between the countries are serious ones with strong constituencies aligned against further movement. The big one is the embargo—or as Cubans call it, “the blockade.” Changing or ending the embargo has the biggest potential to transform the relationship, but it requires Congress to change the laws that put the embargo in place. And the likelihood of Congress moving to change that in the next 18 months is minimal.

A number of senators and representatives on both sides of the aisle are pushing for legislation that would ease elements of the embargo. But the Senate majority leader is set against normalization, so it’s unlikely that he would make time on the Senate floor to discuss measures that would strengthen the new approach.

One of the obstacles is substantive: many in Congress see any normalization as a concession to an authoritarian government with a poor record on human rights. The many outstanding issues between Cuba and the U.S. also include claims on expropriated property from US citizens which have not been settled.

And another obstacle is that in the political landscape right now, Cuba simply isn’t important enough to justify floor time in Congress. This fall’s Congressional agenda is already packed with the nuclear deal with Iran and the fight against ISIL, both of which require urgent foreign policy attention—not to mention ongoing battles over funding the government and the potential for government shutdown, new climate regulations, and government funding for women’s healthcare. Ultimately, these issues all trump maneuvers to lift (or ease) the embargo.

Finally, the window between now and the start of presidential primaries is very short. The Iowa Caucus is scheduled for late January or early February 2016. The Republican base, and the party’s leadership, are deeply divided on Cuba policy. As the primary season heats up and candidates jockey for political positioning, Cuba will only become more controversial and polarizing. All of these factors hamper the potential for any major new Cuba legislation.

So what could come next?

It’s likely that trade measures to facilitate commerce, which don’t require Congressional approval, would be the next meaningful step. By setting ground rules related to trade facilitation through bilateral negotiations, Washington and Havana could start to establish a formal framework for their nascent relationship.

The new embassies will help, though there are still a few key obstacles. The Cuban judicial system, which is far from independent, is a significant hurdle, and the two countries have nothing in the way of a bilateral dispute settlement mechanism. The absence of an independent judiciary poses a big risk for investors and businesses seeking to operate in Cuba. And though Cuba is a member of the World Trade Organization, its government hasn’t historically shown a commitment to attracting foreign investment.

Cuban laws stand in the way of smooth commercial relations. Foreign entrepreneurs, for example, are prohibited from directly hiring Cuban employees—a disadvantage for firms that want to set up shop in Cuba. The size of the Cuban market is challenging, too: Cuba’s GDP per capita is just $5,800—half of the Latin American average. Cuba is a promising market for the United States, but its economy’s capacity is limited—so its impact is limited, in kind.

Whatever happens next, it will have a lot to overcome. The history of the bilateral relationship is complicated and tense: the Cuban Missile Crisis, the Bay of Pigs invasion, Guantanamo, Cuban efforts to export its revolution in Latin America and Africa, and its continued role in Venezuela have all played a role. Even after the Soviet Union’s fall, the two countries have remained isolated from one another for decades.

But they also have a long shared history and culture, and even with all these obstacles, we’ve seen some logistical progress in the relationship. March saw the re-establishment of direct telephone links, an important first step in developing infrastructure and communications between the two countries. Stonegate, a small regional bank headquartered in Florida, now works directly with the Cuban government, allowing Cubans to function outside a cash-only basis when operating in the United States.

These steps suggest how the relationship might proceed for now even without doing away with the embargo, and during a very political presidential primary season. Transparency is key. Setting clear rules and regulations that govern how U.S. businesses operate in Cuba (and vice versa) will allow for a boost in confidence—and a parallel boost in investment. And ultimately, this would ideally include a process for settling disputes.

Finally, Washington and Havana can build on the financial reform efforts that have already been implemented. Though banking and financial services are already simpler, further easing the flow of money and investment would go a long way.

There’s a lot left to do. The first act may be over, but Cuba and the United States are slowly but surely just getting started.

Carl Meacham is director of the Americas Program at the Center for Strategic and International Studies (CSIS).