HAVANA, Oct 20 (Reuters) – Cuba has reached a deal with the Paris Club of creditor nations to postpone an annual debt payment due in November until next year, according to diplomats from five of the governments involved, the latest sign the Communist-run country is suffering a grave foreign exchange crisis.

The historic 2015 Paris Club agreement with Havana forgave $8.5 billion of $11.1 billion in sovereign debt Cuba defaulted on in 1986, plus charges. Cuba agreed to repay the remainder in annual installments through 2033, but only partially met its obligations in 2019 and defaulted last year.

The outlines of an amended deal, worked out between the parties in June and not previously reported, calls for resumption of payments in 2022 and adjustment of the payment schedule, the diplomats said, requesting anonymity to comment.

The Cuban government and Paris Club had no comment on the matter.

The parties in June said in a statement that “this agreement provides more time to the Republic of Cuba to honor several payments due under the 2015 Arrangement, while maintaining the present value of these amounts.”

Cuba has now fallen behind by around $200 million on payments, including this year, the diplomats estimated.

It is not clear if penalties will apply as the pandemic crunch has led lenders to waive fees on other debtor nations.  Cuba said this week it had vaccinated 99.2% of its population with at least one dose of its locally developed COVID-19 vaccines, and plans to reopen its borders to international tourism by mid-November after nearly two years of coronavirus-induced stagnation.

The Caribbean island nation depends heavily on tourism to inject much-needed foreign exchange into its otherwise inefficient state-run economy, and for the cash it needs to repay lenders.

“I expect a fairly robust return of tourists impacting other activities and that should improve the outlook somewhat for payment in 2022,” one of the diplomats said.

“Its my understanding most of those payments are also on hold,” another diplomat said, with a colleague seconding that view.

Foreign exchange revenues fell by some $4 billion beginning in 2020 and the import of basic goods and inputs for agriculture and production in general plunged nearly 40% as a result, the government reported.

The economy contracted 10.9% last year and another 2% through June, compared with the same period in 2020, resulting in shortages of food, medicine and other basic goods.  The government this year predicts the economy to grow 2%, just barely beginning to recoup last year’s downturn.

Under the original Paris Club agreement, seen by Reuters, interest was forgiven through 2020, and after that was just 1.5% of the total debt still due. Some of that money due was allocated to funds for investments in Cuba.  The diplomats who spoke to Reuters said they did not expect any significant changes to that portion of the agreement.

Cuba last reported foreign debt of $18.5 billion in 2018, and experts believe it has risen since then, especially to suppliers and investment partners who reported serious payment issues as early as 2018. The country is not a member of the International Monetary Fund or the World Bank. 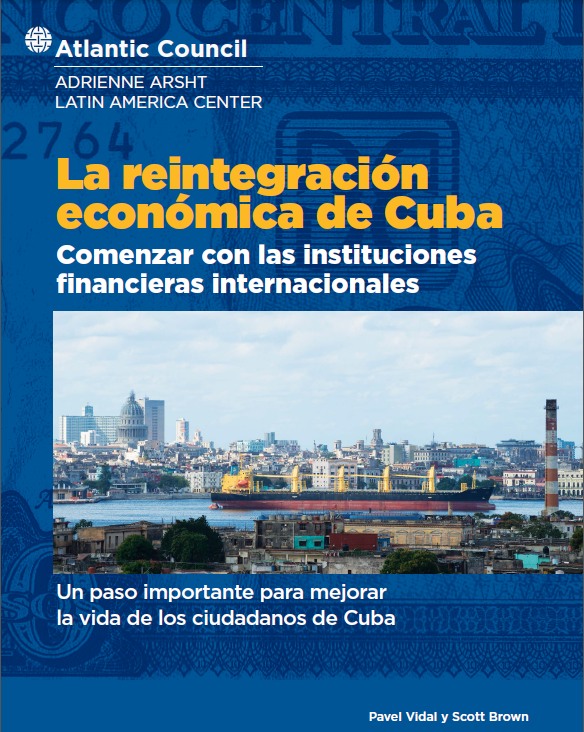 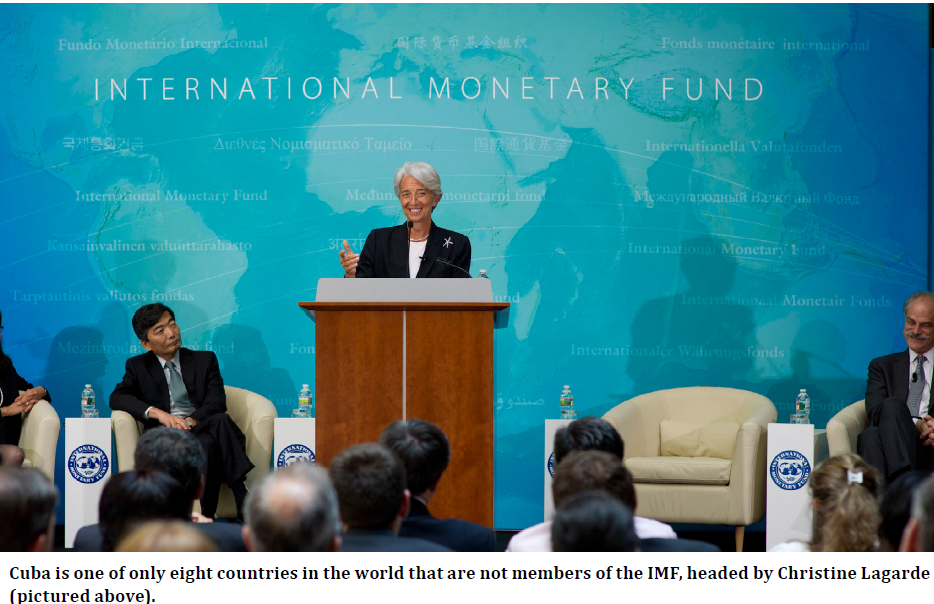 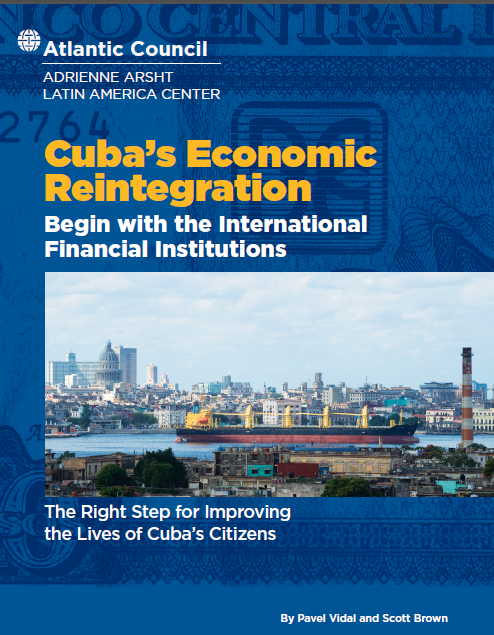 CAF-Development Bank of Latin America plans a small overture toward Cuba later this month that could be a stepping stone toward the island rejoining the international financial community.

CAF — whose members include 17 Latin American and Caribbean countries, Spain and Portugal and 14 private banks in the region — is planning a conference with the University of Havana to explore economic development in Latin America and Cuba.

While the April 28-29 conference is an “intellectual” rapprochement, Enrique García, the executive president of CAF, said that while in Havana, he also plans to explore the possibility of Cuba becoming a member of the only multilateral bank owned by emerging nations.

CAF’s interest, García said, is improving the quality of life for the Cuban people. The overture responds more to a long-standing desire by Caracas-based CAF to bring Cuba back into the hemispheric fold than to the new U.S.-Cuba policy and President Barack Obama’s decision to remove Cuba from the U.S. list of state sponsors of terrorism, García said. But he added: “The new U.S.-Cuba relationship obviously facilitates the opportunity to do things. We are very pleased to see the way the situation is turning out. It’s very positive for Cuba, for hemispheric relations.” 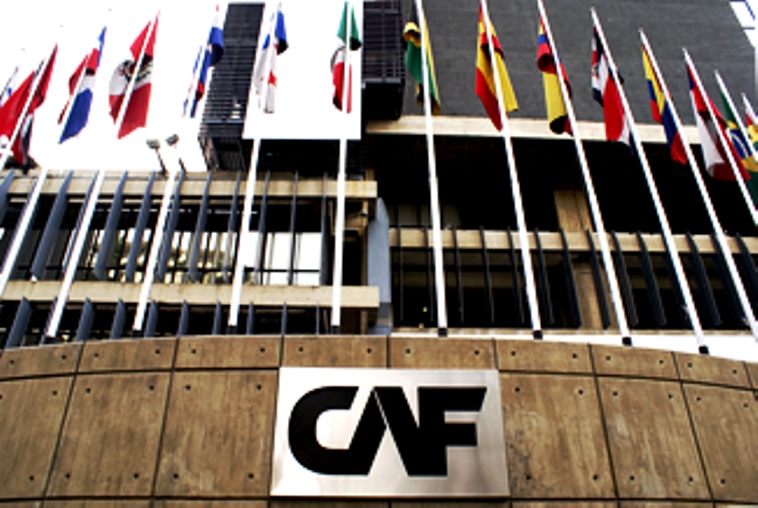 Unlike other regional financial institutions such as the InterAmerican Development Bank, membership in CAF doesn’t require that a member country also belong to the Organization of American States. Although Cuba was one of the founding members of the OAS, it was suspended for nearly five decades after the organization found Cuba’s Marxist-Leninist government incompatible with OAS principles.

The OAS lifted that suspension in 2009 on the condition that Cuba take part in a “process of dialogue” on OAS principles. But that dialogue never took place and so far Cuba has said no thanks.

For decades, Cuban officials criticized the OAS as a tool of the U.S. government and said the organization would “end up in the garbage dump of history.” But that was before the United States and Cuba began the process of renewing diplomatic relations. “My feeling, however, is that Cuba will not return yet to the OAS,” said José Miguel Insulza, secretary general of the OAS. “It’s going to wait for some time. I think the issue of the U.S. continues to be very relevant for them. They want to have normal relations with the U.S. first.

“Second, it’s been so many years that probably they would prefer to go to other institutions of the inter-American system,” Insulza said. “The political step will be taken later. After telling your people for 54 years that the OAS is the worst thing in the world, you just don’t come and sit down without explaining.”

Things are percolating on other fronts too as Cuba tries to shore up its troubled finances and rejoin the global economy. In early March, for example, Paris Club Chairman Bruno Bezard met with Cuban finance officials in Havana. Cuba stopped servicing its debt with the Paris Club, a grouping of 20 industrialized nations, in 1987.

The two sides began talking about a year ago after previous Paris Club negotiations in 2000 broke down. “We have moved very quickly. There is plenty of will on the Cuban side and the side of the creditors to begin this work,” Bezard said at a news conference in Havana. During the talks, how much debt and interest are owed to each Paris Club creditor was discussed. France is currently the largest of 15 Cuba creditors.

Bezard, also director general of the French treasury, recently told AFP that in a matter of months, debt negotiations with Cuba might begin over the approximately $15 billion it owes Paris Club members.

In recent years Russia, Japan, China and Mexico have forgiven a portion of Cuba’s debt and given Havana more manageable repayment terms.

García said that CAF has been exploring the possibility of Cuban membership “for quite some time. The question is when and how and also to be pragmatic. Obviously we have to analyze membership very carefully.”

García said if Cuba were to join the development bank, the goal “at this stage” would be to provide technical assistance to Cuba rather than loans. In CAF’s 45-year history, García pointed out, it has never had a default.

If Cuba were interested, CAF might, for example, provide technical support as Cuba tries to unify its dual currency system, he said.

Now the focus is on the international seminar, “Opportunities and Challenges for Economic Development in Latin America and Cuba,” that will bring about 150 people together later this month. Among those who have been invited are Enrique Iglesias. former president of the Inter-American Development Bank, and Alicia Bárcena, executive secretary of the Economic Commission for Latin America and the Caribbean.

“We’ll discuss how we approach development issues — how we see the world and how they see things,” García said. “It’s important to engage.”