from Cuba Feute via The Cuba Standard 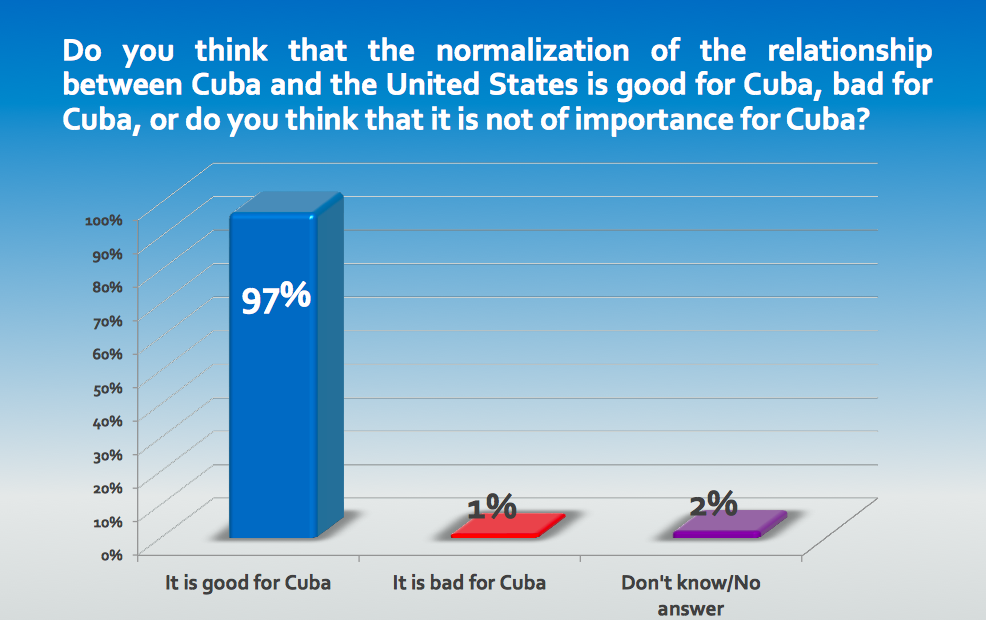 The vast majority of Cubans welcome the current rapprochement with the United States and are optimistic about their future, according to a recent survey conducted in March on the island. On behalf of The Washington Post, Miami-based public opinion research firm Bendixen & Amandi International surveyed 1,200 Cubans on a wide variety of topics.

The survey produced a unique mosaic of opinions from the country. However, the results have to be looked at carefully.

Opinion surveys are nothing new to most Cubans. The government has been using the methods of empirical social research for decades, to gather the mood of the population and identify specific problems to adapt their policies. For public researchers from other countries, however, Cuba is a tough environment. Government institutions are extremely suspicious of foreigners walking from door to door with questionnaires. In the case of Bendixen & Amandi, this made the hidden recruitment of Cuban interviewers obligatory.

“About three or four days into it, we got word that three of our interviewers had been detained,” said Fernand Amandi, who headed the Cuba poll. Still, the team managed to finish all interviews as scheduled between March 17-27. Although other public opinion institutes conduct Cuba polls on a more or less regularly base, the recent Bendixen poll stands out in the context of the diplomatic thaw between Cuba and the United States, and shines with its broad extent of aspects. Cuba pollsters from the exterior rarely manage to conduct 1,000 Interviews with such a wide variety of topics, so it is not surprising that international media gave broad coverage to the poll.

A closer look at the results is definitely useful.

Prevailing optimism and the desire for prosperity

First of all, it is striking that most Cubans draw a bright picture of their future. Seventy-two percent of respondents considered themselves optimistic about their own and their family’s future. Fifty-five percent assume that their wishes will become reality within the next five years. Asked about what they desire, 64% said they want to travel to another country, while 37% want to open their own business, followed closely by 34% who want to buy a car — multiple responses were possible here.

On the question, “In your opinion, what do the people of Cuba need the most at this time?”, 24% demand an open political system, while exactly as many want an improved quality of life. Far ahead in first place was, however, an improved economy, which 48% said Cubans need most. Only 19% claimed to be satisfied with their current economic system, which underlines the predominant perception of economic struggles.

The political system of Cuba — a bit of context

At least 39% of Cubans stated to be satisfied with their political system, while 34% said they weren’t satisfied at all with politics in their country. For 49% of those, the reason was a lack of freedom, while in second place 26% named the lack of economic development. Nineteen percent, however, stated the abstract slogan “We need change” as reason for their political discontent.

In a wider Latin American context, the political system of Cuba doesn’t perform as badly as these numbers suggest on first sight. According to recent Gallup polls, only 34% of Latin Americans trust their respective parliaments. In Peru, only 25% of the interviewees said they trust their government, while only 28% of Peruvians are satisfied with the state of democracy in their country. To give some other examples: In Colombia, 39% are satisfied with their democracy, in Argentina and Brazil 49%, and in Ecuador 56%.

Cubans rated their social system above-average, although the approval turned out slightly worse than in previous polls. Today, 68% of Cubans are satisfied with their healthcare system. This coincides with a 2007 Gallup poll, where 75% of Cubans said they trust their healthcare system — in contrast to 57% in the rest of Latin America. With 72% satisfaction, the Cuban education system was rated slightly better than healthcare. In 2007, Cuba already performed well with a 78% satisfaction in contrast to a 59% Latin American average. At that time, only a meager half of Latin Americans stated that education is accessible for all in their country, while 98% of Cubans affirmed this for their island.

Asked about their stance towards other countries, Bolivia, Ecuador and Venezuela were rated highly positive; more than 90% of respondents considered these countries a “friend of Cuba”. The United States ended up with 53%, far behind Russia (71%), although still ahead of North Korea (43%).

An overwhelming majority of Cubans (97%) share the opinion that diplomatic normalization with the United States is good for their country. Sixty-four percent expect economic changes, while 37% are expecting changes in the political sphere. Although 52% of respondents would like a multi-party system for Cuba, only 19% expect that this will be realized.

Not surprisingly, 96% of Cubans oppose the U.S. embargo against the island, but 83% would appreciate Raúl Castro visiting the United States. Their views of the United States also emphasize the economic priorities of many Cubans: Asked what they expect from the Cuba-U.S. thaw, 43% would like to have U.S. supermarkets, which places consumption on the first place in their wish list, followed closely by apartment buildings (41%), pharmacies (40%) and cars (35%). Meanwhile, most Cubans seem not to fear the side effects of a tourist boom, with 96% claiming that tourism would benefit their country.

Asked about the popularity of personalities, Pope Francis and Barack Obama seem to be the most popular international leaders in Cuba. Eighty percent of respondents had a positive opinion of them. Naturally, this wasn’t the case when it comes to their own head of government: Only 47% of Cubans have a positive opinion about Raúl Castro, giving him the same approval rating that Obama currently holds among Americans. However, Raúl is slightly more popular than his brother Fidel, who received a 44% approval rating. In a Latin American perspective, Raúl Castro actually enjoys the same approval rating as Rafael Correa in Ecuador (45.5%), but is far more popular than his close Venezuelan ally Nicolás Maduro who currently has to deal with a lowly 25%. Maduro is faring much better among Cubans, enjoying a solid 62% approval.

It’s also interesting to put a closer look at the demographic composition of these results. While in the group of 18-49 year olds 75% view their future optimistic, only 68% of those 50 years and older share this attitude. Even more striking is the obvious racial gap. Seventy-seven percent of the self-described white population are optimistic of their future, in contrast to only 57% of Afro Cubans. Nevertheless, support for the political and economic system of the island is above average within the black population.

The same is true for the popularity of Raúl Castro, although the age gap is much smaller here. Only 43% of the 18-34 year olds have a positive opinion of their president, while Castro is enjoying the support of the majority (55%) of Cubans older than 65 years. The situation is similar for Fidel Castro, who enjoys the highest backing in the group of 50-64 year olds (51%), while only 40% of white Cubans but 51% of Afro Cubans have a positive opinion about their ex-president.

Also, there is a noticeable regional spread: While Raúl Castro enjoys his highest approval (57%) in central Cuban provinces, Fidel Castro is quite more popular in western Cuba and Havana, where 58% do have a positive opinion of the historic leader of the Revolution. Obviously, their origin doesn’t play a role, since both Castros were raised in eastern Cuba, where their popularity is lowest.

How representative is the composition of the poll?

Speaking about demographics, some methodical weaknesses of the poll are obvious. Asked by Cuba heute, the Washington Post stated that “researchers did compare the demographic makeup of respondents to the overall population on sex, region and race, and found they were very close to government estimates”, but “the sample was somewhat younger than the overall population.” Although one can approve this statement when looking at the final results, there is some evidence for a lack of representation when it comes to the social composition of the group of respondents.

It stands out that 57% of respondents claimed to have access to their own landline phone in their home. Official figures show that there are only 29 phone lines per 100 inhabitants (including cell phones) in Cuba. After speaking with the pollsters of Bendixen & Amadi, the Washington Post found a plausible explanation for this phenomenon, telling Cuba heute that the interviewers themselves already noticed this bias: “Like you, they were surprised by the result on phone usage, and sought an explanation from their field team in Cuba. They reported that many respondents did not comprehend this question as it was intended, and seemed to interpret having access to a phone at home as having access to a phone in their community (i.e. in a neighbor’s home). Some interviewers observed homes having no visible telephone but nonetheless reporting that they did.”

It gets more complicated when you take a look at the employment of the respondents. The pollsters of B&A surveyed as many state as private-sector employees in Cuba; every third person was apparently working for the private sector, according to the results. This definitely is not a representative composition in a country where only 22% of all employees (including farmworkers) work in the private sector. This sums up to only 12% of the adult Cuban population, the target group of the survey. This possibly points to an urban bias within the set of respondents, where an obviously disproportional number of private-sector employees was included. Other polls, like the annual Cuba Survey of the International Republican Institute (IRI), did a much better job when it comes to the selection of a representative group of participants. The Washington Post has yet to answer a question about that subject.

Opinion polls in Cuba always have to overcome many obstacles. On the one hand, the country lacks the appropriate infrastructure to conduct modern randomized telephone surveys. On the other hand, the old-style survey process itself seems to be even more difficult in Cuba than in other places. Especially with controversial political topics (e.g. the question of the one-party system), more than 20% of respondents declined to make a statement. In addition to that, it is perfectly conceivable that many supporters of the Revolution do not participate at all in foreign surveys, as a matter of principle. Even for major polling institutes seem to fail in the selection of a representative group of participants. Last but not least, some questions suffer from a huge range of different interpretations, as the example of the telephone landlines shows.

Despite their methodical weaknesses, the Bendixen & Amandi survey gives us a first insight into the thinking of some Cubans. Despite the usual margin of error of 5% and a not fully representative audience, one can at least on the clearly unequivocal questions draw some conclusions about the attitude of the overall population. Even so, this survey represents a snapshot. Especially on controversial issues a high grade of uncertainty remains, which is why the results should always be treated with caution. 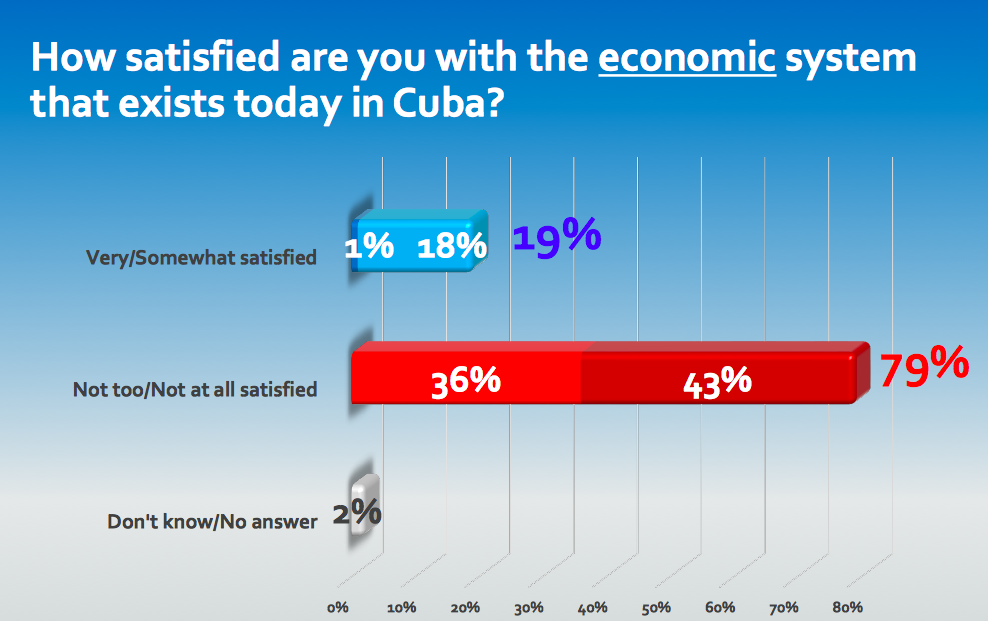 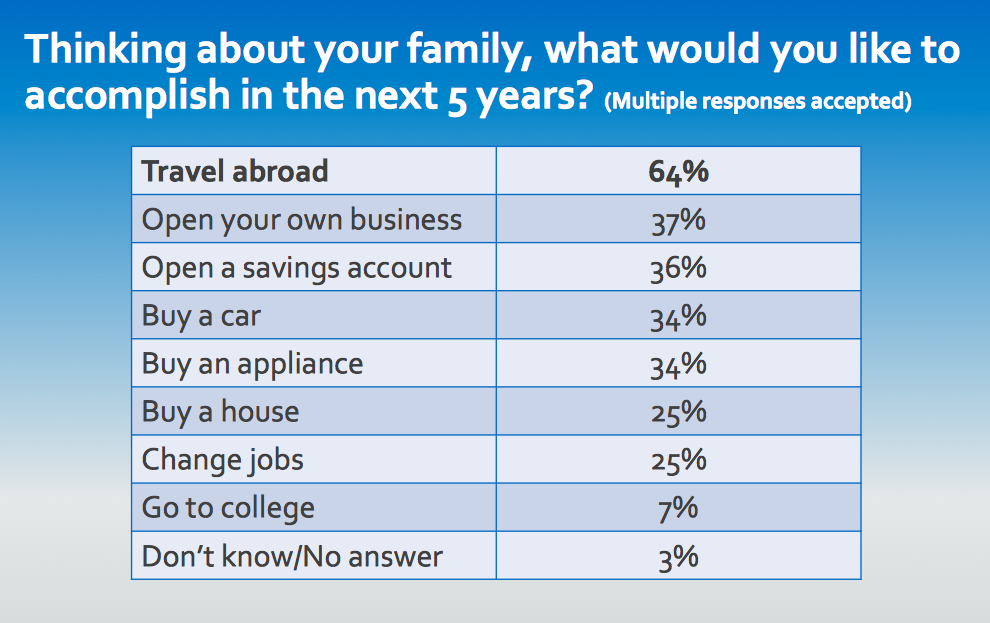 Cuba heute is a German-language blog about political and economic trends in Cuba with emphasis on the ongoing reform process. The author is studying politics and history at the University of Jena (Germany) and plans to spend a semester in Havana this winter