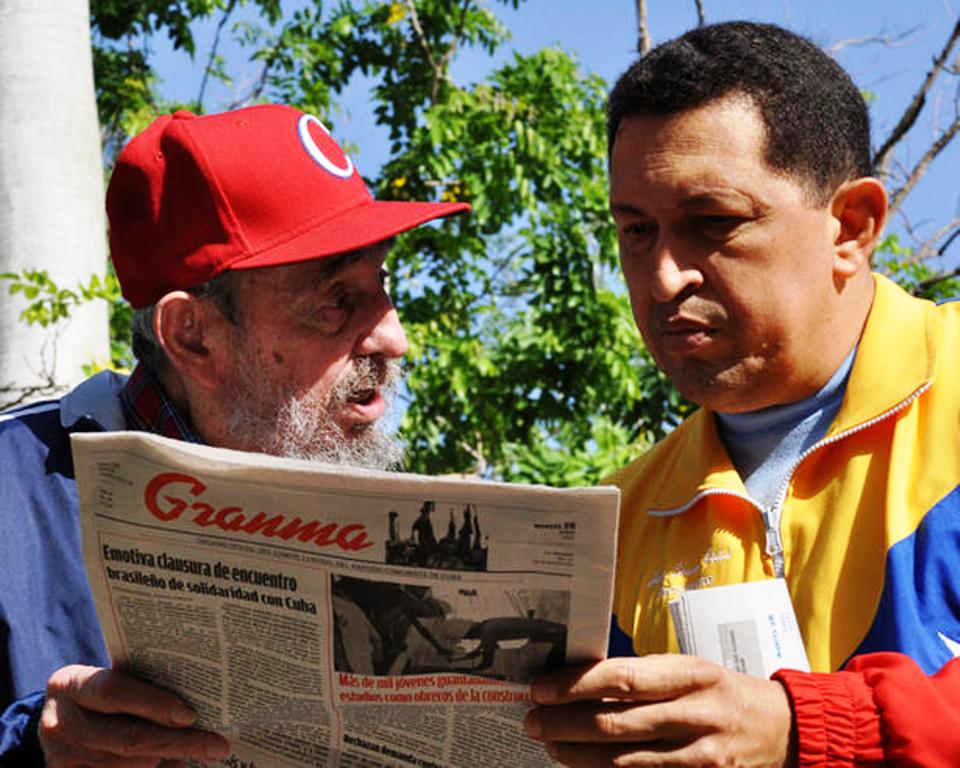 The new hero of the increasingly creaky Cuban revolution is a bumptious, 57-year-old politician burdened with what may well be grave medical problems — a former army officer who doesn’t sport a beard and isn’t even Cuban.

But Hugo Chavez is the president of Venezuela, and that means oil. Unfortunately, in this case, it also means cancer. The now bald-pated Chavez insists he’s licked the disease, but his prognosis is a matter of dispute.

Upon such slender, unpredictable strands do the destinies of small, socialist, island states depend — or at least those that bob above the Straits of Florida, just 170 kilometres from Key West.

“Without the Venezuelans, we’d have nothing,” says Oscar Espinosa Chepe, a prominent Cuban economist and dissident, speaking on the phone from his cramped Havana apartment. “If we lost this, I don’t know what would happen.”

This is the massive infusion of assistance — estimated to be worth about $3.5 billion a year — that Chavez now funnels into Cuba’s struggling economy, largely for ideological reasons and mainly in the form of petroleum.

Without that largesse, the island’s wilting economy might keel over, dead.

“The support from Venezuela has been phenomenal,” says Arch Ritter, an economics professor at Carleton University and an expert on Cuba. “If anything happens to Chavez, Cuba could be in trouble again.”

Two decades have spiralled past since the Cold War’s end, when Moscow hastily abandoned its only Caribbean satellite state. During those years, the island’s industrial output has shrunk by more than half, the result of rusting Soviet-era infrastructure and poor management.

It would be crazier still without Venezuelan support, which meets approximately two-thirds of the island’s annual petroleum needs and is delivered in at least nominal repayment for the services of tens of thousands of Cuban doctors now deployed across Venezuela and in other left-leaning Latin American states.

“Assistance from Venezuela is now the basic element of the Cuban economy,” says Espinosa. “Venezuela has converted itself into the new Soviet Union.”

Behold Cuba, 52 years after the triumph of Fidel Castro’s revolution: a country whose rulers are mainly geriatric, white and male, where the average salary works out to just $18 a month, where sugar production — once the backbone of the economy — now lurches along at about one-half the average international level of output per hectare, and where the economic future depends to a worrisome degree on the dubious health of a man named Hugo Chavez.

Who isn’t even Cuban.

By almost all accounts, Chavez and Fidel Castro share an intimate bond, but the elder Castro was laid low five years ago by a life-threatening gastrointestinal ailment. Now 85, he has surrendered all formal claims to power and has largely disappeared from public view.

Fidel’s successor — his slightly younger brother, Raul, now aged 80 — is trying to steer the country in a new economic direction, without actually calling it that and without diluting central political control.

Meanwhile, Cuba’s largest natural trading partner remains its bitterest political foe, an increasingly nonsensical standoff that has prevailed for more than five wearying decades and betrays little sign of changing now, especially not with a U.S. presidential election in only a year.

“I don’t know what it is about Cuba,” says Wayne Smith at the Center for International Policy, a Washington-based think tank. “Obama has done very little. It’s very disappointing.”

Shortly after taking power, U.S. President Barack Obama removed restrictions on Cuban Americans who wish to send money to relatives on the island or visit family there.

But that was about it.

The Americans still squander millions of dollars a year on provocative but ineffectual propaganda efforts aimed at destabilizing the Castro regime.

And the infamous U.S. economic embargo remains in place, still with the professed purpose of dealing a crippling blow to the Cuban revolution, something it has never done, isn’t doing now and never will do.

The reasons the punitive barrier has not been lifted have more to do with domestic U.S. politics than events in Cuba. Now, as in decades past, neither Republicans nor Democrats in the U.S. are inclined to cosy up to anyone named Castro, not if that means alienating more than a million Cuban-American voters.

The already bleak outlook for rapprochement between the two sides only got bleaker last March when Cuban authorities sentenced American Alan Gross to 15 years’ imprisonment on charges of distributing illegal communications equipment to members of the island’s small Jewish community.

Smith says Gross got what he deserved. After all, he had been making repeated trips to the island, delivering what Smith calls “rather sophisticated” devices, without proper documents. The Cubans finally lost patience, he says.

“I’m only surprised they waited that long.”

Others believe the Cubans are looking for a trade.

Cue the Cuban Five, a group of men sentenced in 2001 by a Florida court to jail terms ranging from 15 years to life on charges of espionage, in what many regard as a blatant miscarriage of justice.

“The case of the Cuban Five is a blot on the honour of the U.S.,” says Smith. “The trial was totally biased.”

Last month, one of the five was released from prison after his sentence was reduced for good behaviour. That was dual citizen René Gonzalez, who will be obliged to serve out his probation in the States. The others remain behind bars.

In Cuba, where the men are celebrated as heroes, the authorities fervently want them back.

But an exchange — Gross for the Cuban Five — seems a long shot at best. Besides, the most pressing challenges for Cuba right now are economic.

Raul Castro has warned that the country’s socialist economy is perched upon a precipice and last year announced his intention to lay off 1.3 million public-sector workers.

Layoffs there have been, combined with several cautious nods to small-scale entrepreneurship. Cubans may now own beauty parlours, restaurants and the like. They may buy and sell cars and even real estate.

The pace of reform isn’t fast enough for some. But even restless dissidents such as Espinosa acknowledge that Cuba has changed.

“The government has lost the ideological battle,” he says. “The majority of Cuba’s people, including the Communist party and the government, are in favour of change. There’s no turning back.”

In the meantime, there’s Hugo Chavez — and imported sugar.