The first Cuban exports since the embargo went into effect over a half century ago arrived at Port Everglades Tuesday as port officials prepared to receive a business delegation from Cuba later in the week.

The delegation also plans to visit the Port of Palm Beach, which is located in Riviera Beach, and Port Tampa Bay durina a swing through the United States that has already included a stop at the Port of Houston. Also on the itinerary are visits to the Port of New Orleans and the Port of Virginia in Norfolk and meetings with the U.S. Chamber of Commerce in Washington D.C., members of Congress and the American Association of Port Authorities, which is holding a conference in Tampa.

Two containers of artisanal charcoal made from Cuban Marabú, an invasive woody species from Africa that is considered a nuisance on the island, arrived at the Fort Lauderdale port aboard a Crowley Maritime ship called the K-Storm. The charcoal exports, which are produced by private worker-owned cooperatives, are legal under a rule change by the former Obama administration that allows the importation of some products produced by independent Cuban entrepreneurs.

In Cuba, Marabú has taken over wide swaths of idle agricultural land and strangled other plants. But it makes a hardwood charcoal that is winning acceptance as a fuel for pizza and bread ovens in Europe and the Middle East. It will be sold under the Fogo Charcoal brand by various U.S. retailers.

The charcoal deal was put together by Coabana Trading, a subsidiary of Reneo Consulting, a firm chaired by Scott Gilbert, the Washington D.C. lawyer who represented Alan Gross, the USAID subcontractor who was jailed by the Cuban government for five years.

“This is truly a momentous occasion,” Gilbert said when the deal for 40 tons of charcoal was announced earlier this month. “Now U.S. consumers will be able to purchase this product, as have Europeans and others for many years. More importantly, this marks the beginning of a new era of trade between the United States and Cuba.”

The agreement was struck with CubaExport, a Cuban government entity that develops trade opportunities, but Scott said that the Marabú plant is cut and the charcoal produced by private Cuban cooperatives.

The embargo still remains in effect, but executive orders issued by Obama over the past two years eased some Cuba-related travel and trade restrictions.

Although the transaction was negotiated under the Obama opening, the historic Cuban exports are arriving during the Trump administration. Trump has said he might roll back some of Obama’s executive orders on Cuba unless Cuba offers a better deal to the United States and Secretary of State-nominee Rex Tillerson has said that all Obama’s executive orders on Cuba will be reviewed.

Whether Cuban charcoal becomes a staple of U.S. trade with the island remains to be seen.

“It’s experimental, but the importer hopes to have regular shipments,” said Jay Brickman, vice president of government services and Cuba service at Crowley. Brickman called the shipment “the first truly commercial shipment from a Cuban cooperative to a private U.S. business since the U.S.-Cuba trade embargo was imposed more than 50 years ago.”

The shipping line makes thrice-monthly trips from Port Everglades to Cuba’s container port in Mariel and also calls in Honduras and Guatemala before returning to the Fort Lauderdale port. Crowley mostly carries frozen chicken parts and foodstuffs to Cuba but it also handles small amounts of other legal exports to the island and was involved in shipping some of the equipment that the Rolling Stones used in their historic concert in Cuba in March 2016.

Crowley has been calling on Cuba for the past 15 years. “We average about 40 to 45 loads of cargo [for Cuba] per voyage,” said Brickman.

Another port user, Pearl Seas Cruises’ Pearl Mist, is currently on its maiden voyage to Cuba from Port Everglades.

On Thursday, a Cuban delegation will be at Port Everglades to sign a memorandum of understanding between the port and the National Port Administration of Cuba that could pave the way for joint marketing studies, joint training and other cooperation, said Jim Pyburn, the port’s director of business development.

“We would like to see U.S. exports to Cuba increase; imports are good, too,” said Pyburn.

He hopes for a future when large U.S. grocery chains and shopping clubs ship food to Cuba from the port. “Cubans are in dire need of paint and basic building materials and we’d like that to be part of the [export] mix, too,” he said.

At Port Everglades, the seven-member Cuban delegation will begin its day with a meeting with Port Director Steven Cernak, tour the port and then lunch with executives from Crowley and the cruise lines. In the afternoon, the delegation will present a “Doing Business with Cuba” seminar for about 150 invited businesses executives. It will include presentations on inland and sea transportation in Cuba, the Mariel Container Terminal and the Mariel Special Economic Development Zone, which is prospecting for foreign investment projects leading to sustainable economic development.

The Cuban delegation includes Ana Teresa Igarza, general director of the Mariel zone; José Leonardo Sosa Barrios, deputy director of the Mariel Container Terminal; Eradis González de la Peña, president of Almacenes Universales; René Rolando Fernández, director of inland waterway and sea transport for the Ministry of Transportation; Tania Vazquez, an official with the Ministry of Foreign Trade and Investment; Joel Lago from the Cuban Embassy in Washington’s economic and trade office and Ernesto Viñas, an adviser to the deputy minister of transportation.

Pyburn said Port Everglades had been working on an MOU with Cuba since early 2016 but originally it was only going to cover Mariel, which is about 28 miles west of Havana. Now, with the involvement of the National Port Administration, it will cover all Cuban ports.

He said the MOU was completed for signing in May. But there was little action until Brickman visited Washington in December. During the trip, Brickman said he received a call from the Cuban Embassy “saying the Cubans would really like to sign a memorandum of understanding with Port Everglades.” He helped facilitate the visit and the signing.

The Port of Palm Beach also is expected to sign a MOU with the Cuban port administration on Friday. 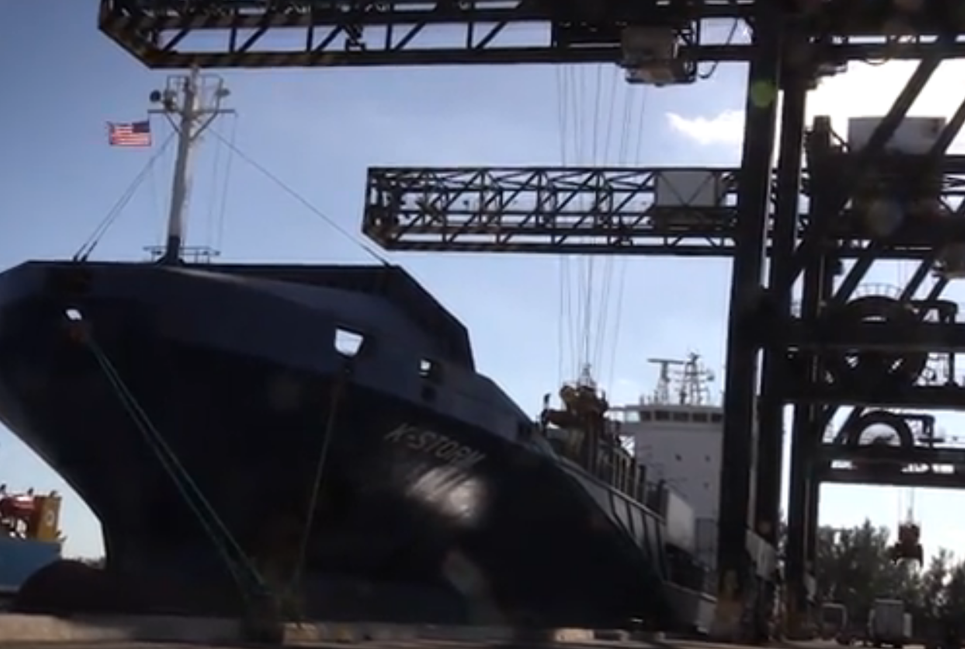 Cuba sugar cane marabu weeds ‘could be turned to fuel’

Driving the Cart past a “Marabu Woods

Drive anywhere in the Cuban countryside and you will spot the marabu lining the road: a dense, woody weed that grows as tall as trees and has invaded vast swathes of agricultural land. The land-grab began in the 1990s when Cuba was in economic crisis following the collapse of its great benefactor, the Soviet Union. The mighty sugar industry slumped too, and cane fields were overrun by marabu.

But to one British firm, the aggressive weed is less a problem than a valuable resource.

Havana Energy has just signed a $50m (£31m) investment deal to build a renewable-energy power plant in central Cuba, supplying one of the country’s biggest sugar mills as well as the national grid. During the harvest it will be fuelled by sugar-cane residue, known as bagasse. The rest of the year it will be fed with marabu. “Marabu has a very high calorific level and low moisture, so as biomass it’s very attractive,”

Harvesting marabu will also address a pressing issue on the island. “Seventy per cent of the food Cubans consume is imported, which is a national tragedy with their climate and soil,” says technical director Keith Dawson. “Every Cuban hates marabu so we’re doing a service: not just removing it but also returning the land to farming.”

The deal is a joint-venture with Cuba’s state sugar monopoly and is part of a move by the Communist government to diversify its energy supply away from dependence on subsidised, imported oil from its socialist ally, Venezuela.

Now the papers have finally been signed, the British team face their first major test. Early next year they will import a combination of forestry and construction equipment that they hope can harvest the marabu economically. No-one has managed that yet. “You can’t underestimate marabu. We’ve brought foresters to look at it and they’ve been confused, and agricultural kit is not strong enough,” says agricultural adviser Julian Bell.

The plant’s woody roots vary in size and are as dense as teak with fierce thorns.

“Usually you just wouldn’t bother. But I don’t know anywhere else with 1.5 million hectares covered in such a good energy source,” he says.

There is another incentive. Research at Strathclyde University has revealed that marabu produces high-grade activated carbon for use in filters – like in Cuban rum production. Potentially, the carbon could also be used in new-generation fast-charging batteries. So Havana Energy will bring a reactor to the Ciro Redondo mill next year to trial carbon manufacturing.

In the small town that grew up around the sugar mill, there is a good deal of expectation about the investment. The joint venture should create around 60 new jobs and includes funds to upgrade the dilapidated mill itself, now a century old. Only one of its three crushing machines are operational, it still has Soviet-era signs and ageing east German equipment, and large sections of the roof are missing. “It’s in a terrible state,” says retired sugar-worker Oberto Vazquez as he passes on his bicycle. “When it rains, it rains more inside than out.”

So for Cuba this venture is not only about sourcing alternative energy.

The government is in the midst of a drive to boost sugar production, cashing in on higher global prices and increased demand from countries like China. It has reopened almost a dozen old mills, targeting 20% production growth per year.

It has allowed foreign funds into the sector for the first time since the 1959 revolution. As well as the British venture, a Brazilian firm has been contracted to manage another large mill in a nearby province.

“The main [British] investment is to build the power plant, but we have negotiated access to credit to improve the cane fields and the sugar mill itself,” says Rafael Rivacoba, director of international relations at Azcuba, Cuba’s sugar firm. “I think that’s positive.” He describes further foreign investment in the sector as a possibility, but is cautious. The deal with Havana Energy took three years to negotiate. “We’re thinking about other things,” he says, admitting that international sugar brokers are knocking at his door. “But nothing’s been decided.”

On the ground in Ciro Redondo though, funding from anywhere is welcome.  The mill can only afford to irrigate 12% of its crops today; average yields in the cane fields are under half the international norm. “We have the will and the knowledge,” says manager Victor Dieguez. “But we need investment.”

That is now on its way and if this pilot project succeeds, the British team has an option to build four more power plants at other sugar mills. First though, it has to tackle the marabu: to prove that it does have the solution, to turn a weed into a valuable asset. 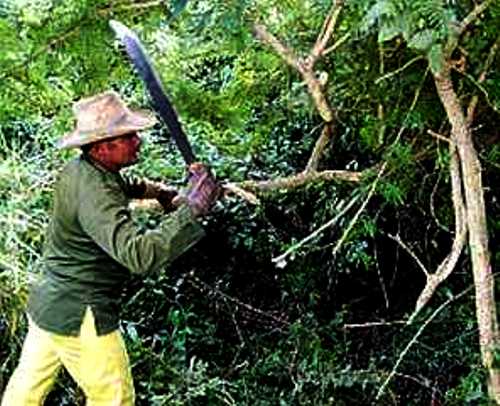