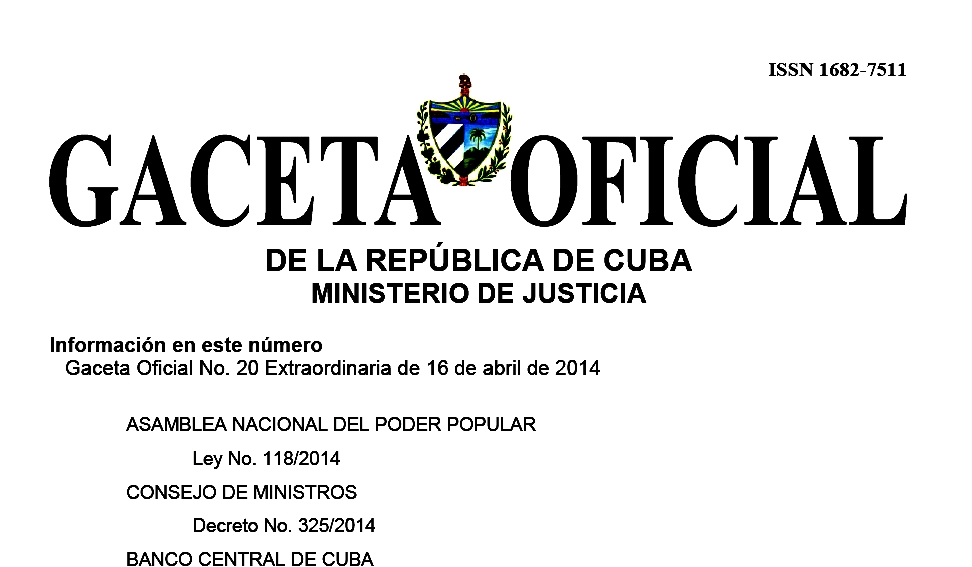 The objective of the law is to provide an improved legal, fiscal and regulatory framework for foreign enterprises that decide to operate in Cuba.

Cuba has passed this law because of the perceived benefits that such direct foreign investment can generate for the country, namely technological and managerial transfers, access to foreign markets, higher-productivity employment, higher income levels, financial inflows and increased levels of investment. This last factor is of especial importance in view of the very low levels of investment that Cuba has achieved for the last 20 years. Indeed Cuba’s levels of investment have been the lowest in all of Latin America for the last two decades. In 2011 this rate was 10.2% of GDP vis-a-vis 22.4% for all of Latin America. (UN CEPAL, Balance Preliminary, 2013).

The law certainly seems to have created a more hospitable environment for foreign firms, providing greater security of tenure, greater control over the hiring and compensation of labor, and most of all, through generous tax breaks. Indeed, the tax advantages for foreign investors now seem to me to be overly generous. One might estimate that the new foreign investment regime will be highly successful in promoting foreign investment from a range of sources and perhaps especially from China and Brazil.

However, there is a major element of injustice in the new law, particularly as it relates to taxation. The new tax regime intensifies the discrimination favoring foreign investors operating in “Mixed Enterprises” (Joint Ventures) or “international economic associations” when compared to the tax regime for small enterprises owned by Cuban citizens. This is both unfair and counterproductive. It may also be unsustainable.

Table 1: Comparison of the Tax Regimes for Cuban Small Enterprise and Foreign Enterprise Operating in Mixed Enterprises  after the 2014 Foreign Investment Law

The most obvious difference in tax treatment is that Cuban small enterprise operators pay a marginal tax rate of 50% of Gross Revenues (less deductions) on any income exceeding 50,000 pesos per year this being equivalent to about US$2,000.00 per year or about US 166.67 per month. In contrast, the foreign corporations in mixed enterprises pay 15% of Profits in taxes – but only after an eight year tax holiday.

Perhaps more serious, for Cuban small enterprise owners, taxable income is calculated as an arbitrary percentage of Gross Revenues – from 60% to 90%  – depending on the nature of the economic activity. The costs of inputs of materials, labor, rent, utilities, etc. and all costs of investment are not deductible from Gross Revenues in determining Taxable Income – only the arbitrary amounts of 40 to 10% or Gross Revenues. To my knowledge, no other country taxes its own enterprise sector in this way.

On the other hand, foreign corporations can deduct all costs of investment and inputs of all sorts from Gross Income in calculating Taxable Income. This indeed is standard international practice.

Or in other words, the effective tax base for foreign firms is Gross Revenues minus all costs of production and investment. In contrast, for micro-enterprise the tax base is gross revenue minus arbitrary and limited maximum allowable levels of input costs ranging from 10 to 40 percent depending on the activity, regardless of true production costs.

The result of this is that the effective tax rates for foreign enterprises are reasonable though generous. But for Cuban small enterprises the effective tax rate can be unreasonable and could reach and exceed 100%. Moreover, investment costs are deductible from future income streams for foreign firms this being the normal international convention.

Moreover, under the new legislation, the profits of the foreign enterprises can all be repatriated. In contrast, the infinitely more modest after-tax incomes of Cuban citizens would virtually all be spent within the domestic economy. If their after-tax earnings were to be taken out of the country, they would have to exchange their CUP or Moneda Nacional savings for foreign currency at the rate of about  CUP 26= $US1.00 or about CUP 34.5 = Euro 1.00

Small enterprise owners must make payment of a proportion of their taxes at the beginning of each month. Foreign firms certainly do not have to do this.

Small enterprise owners also must pay a tax on the hiring of more than five employees (not a good mechanism for creating jobs.). Foreign firms are exempt from such a tax.

This differential tax treatment for Cuban citizens operating small enterprises and foreign enterprises represents a surprising type of discrimination against Cuban citizens. One might predict that this type of discrimination will generate major dissatisfaction on the part of Cuban nationalists as well as Cuban small enterprise operators. Before long, political pressures and the climate of public opinion should require greater fairness in the character of taxation.

However, given the seemingly insurmountable difficulties that some countries such as the United States face in constructing fairer tax regimes, perhaps I am naively optimistic. (Who can forget the 15% average tax rate paid by Warren Buffett and the 14.3% paid by Mitt Romney in comparison with the 35% paid by Buffet’s secretary as well as the average US citizen?)