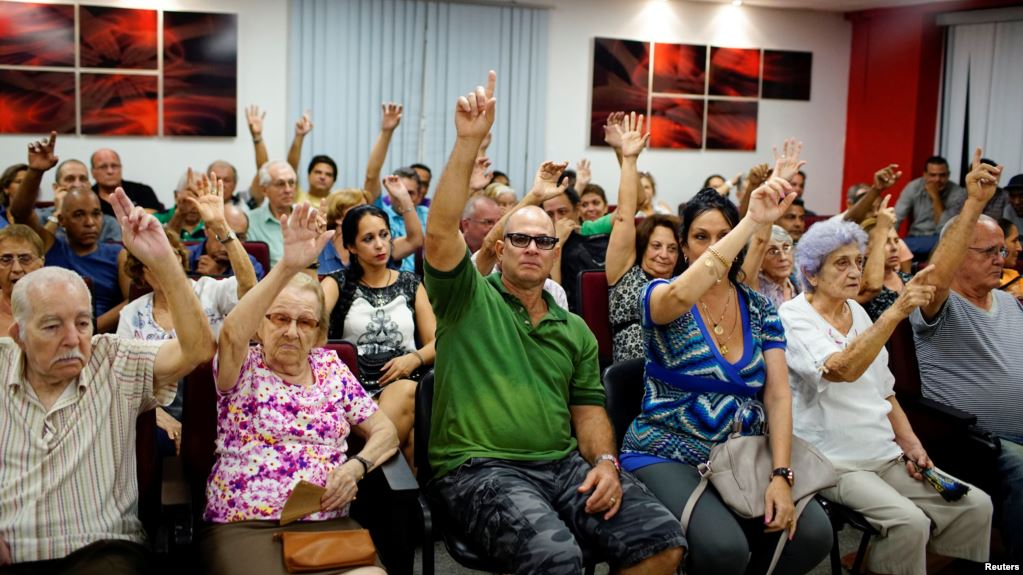 Perfect and enthusiastic accord.

Imported clothing is in high demand in Cuba because foreign apparel is cheaper and of higher quality than threads sold in state-run stores.

“We have been here for three years selling without a problem and abiding by the law, and now they say that this is over?” asked Nadia Martinez, 32. “We are not going to close our business.” Martinez has a government license to work as a seamstress, but in practice runs a modestly successful business selling imported clothes on Galiano Street, one of Havana’s busiest commercial avenues. The clothes are not imported by the government, but rather brought in by Cubans traveling to places like Ecuador, Mexico, Spain and the United States.

Until now, the government had seemed to look the other way as she stretched the scope of her legal employment. But it now appears it may regulate away her economic success story.

In 2010 President Raul Castro expanded the list of government-approved self-employment occupations as part of a very gradual reform of its Soviet-style economy. Castro announced that over the following years he would also be slashing the country’s five-million strong bureaucracy — this on an island with a population of about 11 million — as a cost-cutting measure. Today more than 430,000 Cubans work for themselves or in small businesses. Authorized job categories include restaurant owners, barbers, electricians, plumbers, mechanics and other skilled trades. Privately owned beauty salons and family-owned restaurants known as “paladares” proliferated, often operating from the back of people’s houses. The government, however, remains the country’s largest employer, and central planners still try to control the cash-strapped economy.

Deputy Labor Minister Marta Elena Feito recently announced that the government would fine businesses and people found selling imported apparel or re-selling clothing that originated in state-run stores. Authorities have long tolerated the clothing vendors, and even though Feito said the measures would be enforced “immediately,” no vendor has been forced to shut down.

“We’re waiting for them to come explain the unexplainable to us, because closing us down cannot be a solution,” said Ledibeth Sanchez, 29, another Galiano Street vendor. A few blocks away Carlos Medina, 44, works at the “Fashion Passions” boutique on Dragones Street. The well-stocked store sells jeans, blouses, T-shirts and imported dresses.

“Everything was going very well and suddenly they change it all,” said Medina. He said vendors and store employees are fretting about being potentially being forced to shutter. “Nobody has notified us, but if they give us the order to close, we’ll close,” he said in a resigned tone.

Omara Cambas, 46, a former Communist Youth national leader, opened the “Catwalk Workshop” clothing boutique in the Havana neighborhood of El Vedado just three months ago. “This measure would affect us a lot — the fact is, I’d be without work,” said Cambas.

A key reason so many people have joined the ranks of self-employed — aside from state job cuts — is that state salaries average around $20 a month. Though people may not have to pay for housing here, that is not enough for most to put food on the table for their families or buy clothing.

Castro, 82, took over from his ailing older brother Fidel in 2006 and has chosen not to dramatically open up Cuba’s economic or political system. Fidel Castro led the nation through five decades of Cold War strains with the neighboring United States. Raul Castro has sought to liberalize Cuba’s socialist economy a bit and encourage more private entrepreneurship, but at the same time maintain a key role for the Cuban state through joint ventures.

Since 1962, Cuba has been under a full US trade embargo. But US goods routinely move through third countries or are resold by people traveling into Cuba.