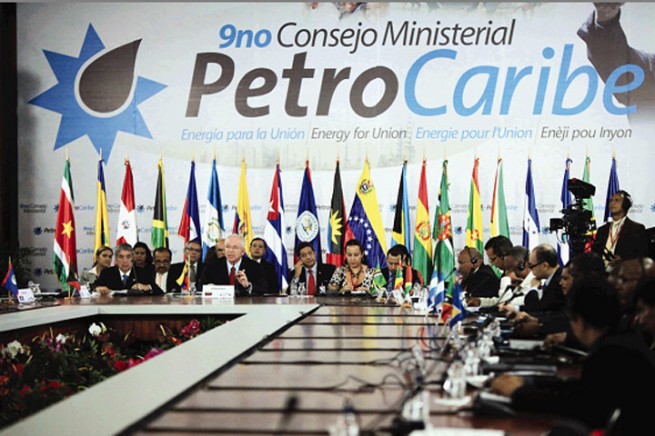 The government of Venezuela is undoubtedly disappointed with the outcome of the 166th meeting of the Organisation of Petroleum Exporting Countries (OPEC) held in Vienna, Austria on 27 November 2014.

Despite intense lobbying by Venezuela, the OPEC decided not to cut oil production even in the face of declining oil prices globally.  The official communiqué of the meeting declared that “the Conference decided to maintain the production level of 30.0 mb/d, as was agreed in December 2011”.  This was bad news for Venezuela which needs to sell oil at US$120 per barrel to meet repayments of its loan commitments; finance its domestic social welfare programme; provide the requisite goods and services for its people, including security; and to fund its Petro Caribe arrangements with neighbouring countries in Central America and the Caribbean.

Venezuela wanted oil production to be decreased urgently so that the price of oil could go up against reduced supply.  The country’s foreign minister, Rafael Ramirez, tried to spearhead an effort to cut oil production by 2 million barrels a day by organizing a meeting of non-OPEC oil producers Russia and Mexico with Venezuela and Saudi Arabia in Vienna on 25 November, but the effort came to naught.

Worse yet for Venezuela, its representatives failed to convince many Arab states, particularly Saudi Arabia, that the oil production of all the OPEC countries should be cut. The Saudis, Kuwait, Qatar and the United Arab Emirates have large foreign currency reserves and therefore can withstand a drop in oil prices for a fairly long time. Their purpose in keeping the price of oil low is to wreck shale oil production in countries such as the United States.  Shale oil companies need a high price of oil to justify investment in production.  Clearly, the Saudis and other powerful OPEC members have calculated that the only way they can remain dominant as oil suppliers in the global market is to keep shale-oil producers out of it.

Before the crucial OPEC meeting, the oil price was hovering close to US$80 a barrel, lower than it has been for many years and largely because of shale-oil production.  Immediately after the Vienna meeting, the price fell as low as US$72.74 a barrel. Even if prices stabilise in the coming weeks to around US$75 a barrel, Venezuela will face a short fall of almost US$40 a barrel – a huge blow to its revenues and its economy.

Against this current background, an undertaking given on 20 November by Ramirez, on behalf of the Venezuelan government, to the 14th meeting of the Petro Caribe Council assumes a huge significance.  Ramirez emphasized that Petro Caribe “is an energy agreement that is perfectly sustainable over time” and he pledged his government’s “firm commitment” to it.   He made this commitment, just one week before the Vienna meeting when it was clear that the majority of OPEC members would not cut oil production in order to hike the price, so he must have done the arithmetic to know that Petro Caribe could be sustained even at a reduced world price for oil.

The fact is that, in economic and financial terms, oil shipments under Petro Caribe, while generous to its recipient countries, are a small portion of Venezuela’s production, and the delayed payment terms have a smaller impact on Venezuela’s revenues in comparison with the bigger blow of a huge drop in the price of its oil sold globally.  It is, therefore, quite likely that, in financial terms, the Venezuelan government will be able to sustain Petro Caribe as foreign minister Ramirez has pledged.

The problem that Petro Caribe poses for the Venezuelan government is more political than financial.  Within Venezuela, opposition parties have demonised Petro Caribe as giving away Venezuela’s financial resources when the people of the country need greater support.  The decline in government revenues, resulting from a loss of almost $40 a barrel for oil, will put severe strain on the government of President Nicolas Maduro, and will embolden the opposition to further paint the picture of Petro Caribe as giving away money that should be spent on the needs of the Venezuelan people.  That is a huge political difficulty for Maduro.

The Petro Caribe beneficiary countries are Antigua and Barbuda, Belize, Cuba, Dominica, Grenada, Guatemala, Guyana, Haiti, Honduras, Jamaica, Nicaragua, the Dominican Republic, Saint Kitts and Nevis, Saint Vincent and the Grenadines, Saint Lucia and Suriname.  With oil at about US$75 a barrel, they can each cope with the price.  So, how Petro Caribe now benefits them is in the deferred payment component.  Many of the beneficiary countries pay 40 % of cash up front for oil shipments, while the balance of the price is converted to a 25-year loan at 1 % with a two-year moratorium on payments.  Many of the beneficiary countries have been using the loan component of the price to pay public service salaries and to fund their recurrent costs.  But the debt has piled-up for several of them.

Sensibly, those countries should now set aside the deferred payment component of the oil price to build-up their foreign-currency reserves  and to help meet the full price of oil should this Venezuelan government –or any other – be compelled to significantly alter or dismantle Petro Caribe.

So, at the moment, despite the unwelcome outcome of the OPEC meeting for Venezuela, Petro Caribe beneficiary countries, including those in the Caribbean, will continue to benefit even as the Venezuelan economy reels from the impact of US$40 a barrel less in income for its oil.

The beneficiary countries have good reason for appreciating the goodwill and co-operation of the Maduro Government.   They would best show it not only by building-up their foreign reserves to cope with future increases in oil prices that will inevitably come, but also by actually repaying the loan component of the oil shipments they now receive.  By doing the latter, they would reduce their own high indebtedness and they would also allow Maduro to show the Venezuelan people a return on the investment that he and his predecessor, Hugo Chavez, made in Caribbean and Central American countries.

Sanders is a Senior Fellow at London University