Being a numbers junkie, I follow the Pan-American Games results – and those of the Olympics – with keen interest. However, I am always bothered by the commonly-used scoring systems that rank countries either but the total number of medals won, or the number of gold medals won.  Obviously these rankings are biased to the more populous and the wealthier countries and are therefore not all that valid. The bigger and wealthier countries such as the US and Canada can develop expertise in all the rarer and expensive sports like water-skiing, water boarding, sailing, and equestrian. Big countries like Brazil and Mexico, both reasonably well-off and with huge population bases can be expected to do well also.

One surprise outlier is always Cuba, which with its relatively small population achieves a strong medals ranking,  coming fourth in these games

But the real winners have always seemed to me to be the small Caribbean Islands with minuscule populations in some cases, yet with some medals to their credit.

So I decided to recalculate the rankings of countries with respect to the Pan-American Games results. According to my system, explained below, the real winners are:

The complete spread-sheet on which these rankings are based is here: Pan-American Games Real Results. You can play with them and re-calculate the rankings any way you like.

It is interesting that even using a population adjustment and Human Development Index adjustment, Cuba still performs exceptionally well, ranking 6th in this system despite a population of about 11.6 million.  Congratulations to Cuba. But congratulations also the Bahamas (#1) and the other Caribbean countries that make the top 9.  The countries with large populations such as the US, Brazil and Mexico obviously don’t do so well with this measurement arrangement. 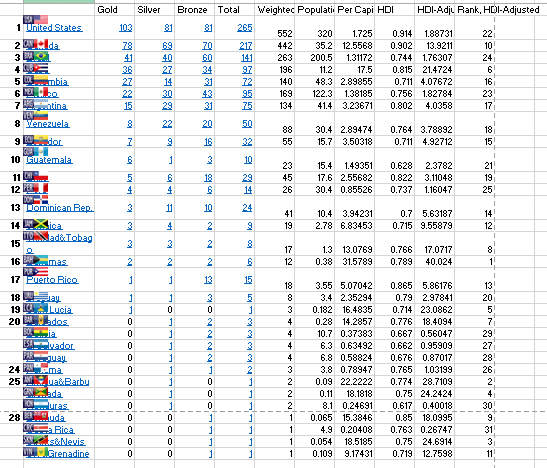 The revised rankings here are based on three adjustments to the raw medals data. First, a weight of “3” is given to gold; “2” to silver and “1” to bronze, generating the “weighted” results on the attached table. Second, the “weighted” results are recalculated on a per million population basis, leading to the “Per Capita” Ranking. Third, the “Per Capita” Ranking results are discounted by the UNDP Human Development Index, leading to the Final results and the HDI-adusted Ranking in the last column. The HDI adjustment was made to compensate for the unfair advantage that better-off countries possess, (with higher income levels and better health systems) that can afford to invest in expensive sports programs.

This entry was posted in Blog, Featured and tagged Sports. Bookmark the permalink.