Yoani Sánchez’s historic visit to New York last week thrust political debates about Cuba into the public arena, exposing their invariably polemical character. During the famed Cuban blogger’s visits to university campuses, the only venues that offered public access to Sánchez, she encountered fans who read her blog Generation Y, Cuban exiles who admire her temerity, and a small but ardent band of protestors. As one of the organizers of the conference featuring Sánchez at The New School and New York University, the institutions that sponsored her visit to New York, I was privy to the challenges involved in bringing her to the U.S. as well as those of managing a volatile crowd. Although the disruptive tactics used by the protestors suggested that they were intent on shutting public debate down rather than engaging with Sánchez, I’d like to take a moment to consider the content of their statements, as well as their form of address.

As a moderator, I reviewed all the questions from the audience. Those coming from Sánchez’s detractors were fairly consistent in content and limited in scope. Her critics asked about money they assumed she receives from the U.S. State Department; they doubted the political effectiveness of blogging; and they demanded to know why Sanchez’s writings did not highlight positive aspects of the Cuban Revolution. They also drew attention to the unjust treatment of immigrant workers in the U.S., as if to suggest either that Sanchez’s calls for democratization in Cuba were tantamount to an embrace of all American policies and practices, or that political change in Cuba would necessarily result in neoliberal style labor exploitation. Although Sanchez was invited to speak about digital cultures emerging in Cuba, the protestors sought repeatedly to sidetrack the discussion by exhorting Sánchez to defend the Revolution and by trying to impugn her credibility.

Sánchez described these protests in Cuban terms as “actos de repudio” — the collective acts of public excoriation aimed at dissidents that are orchestrated by the Cuban government. To her credit, she also responded calmly to many of her opponents’ questions, explaining that she recognizes the limits as well as the benefits of the internet-based movement that she leads; that she visits the U.S. Interests Section to obtain visas just as Cuban officials seeking to travel do; that the translations of her writings into multiple languages are produced by volunteers; that she makes a living from her publications and does not receive funding from the U.S. government; and that she understands her role as an independent journalist to be that of a critical conscience, rather than a promoter of official Cuban policy. Even though the conference organizers explained that Sánchez’s trip to New York was paid for by The New School and NYU, and even though her English translator MJ Porter detailed how the international team of translators had been formed, the protestors continued to accuse her of being a mercenary financed by the CIA, as if repeating unsubstantiated accusations would somehow make them true.

While it is not possible to prove that Sánchez’s protestors in New York took orders from Havana, it does appear that they do not perceive the contradiction involved in exercising their right to express alternative views in order to discredit Sánchez’s attempts to do the same in her own country. The protestors’ raucous behavior was somewhat comic, but sadly, their questions bespeak commonly held assumptions among American progressives about Cuba, Cuban dissidents and Cuban exiles. All too often, progressive Americans maintain their unflinching support of Cuba as an expression of their critical views of U.S. policy, not because of their understanding of Cuban society. Rather than renouncing their political ideals, they seek to silence the messengers who deliver a very different picture of life in Cuba as it is lived, not prescribed by a political apparatus. Unfortunately, the Cuban government makes matters worse through its hegemonic control over academic organizations that support Cuban studies abroad, and by instilling fear in Cuban studies scholars outside Cuba that public criticism of the Revolution will result in their being denied entry to the island. Recent posts from Cuba on government-sponsored blogs raised the issue of whether the presence of Sanchez and fellow blogger Orlando Luis Pardo Lazo on American campuses might have an adverse effect on academic exchange projects between Cuban and U.S. institutions; the very act of releasing such questions can have a chilling effect on public debate about Cuba beyond its borders.

Ardent Cuba-supporters’ tirades against Cubans who publicly expresses criticism of the Cuban Revolution not only mirror the repressive tactics the Cuban government uses to discredit its internal opposition, but also deny Cubans agency as thinking subjects. As Sanchez herself put it, how could it be possible for Cuba to be the only country in the world with a citizenry that agrees with everything that its government does? Might it not be reasonable for Cuban exiles, who send billions of dollars to their island relatives and who function as de facto wholesale suppliers for Cuban small businesses, to have their views be treated with respect too? Don’t Americans deserve access to the diversity of views that exist among Cubans inside and outside Cuba? As a Cuban-American who has conducted research on Cuban culture for three decades, I have had to contend with intimidation from extreme right Cuban exiles, pro-Cuba leftists in the U.S. and Cuban state security because I refuse to stay inside the ideological sandbox created by the Cold War. I find it quite heartening now to witness how Cubans from across the political spectrum are beginning to open themselves to peaceful dialogue with each other thanks largely to the work of writers such as Yoani Sánchez who are creating virtual forums for a plurality of views about Cuba to be shared with the world. 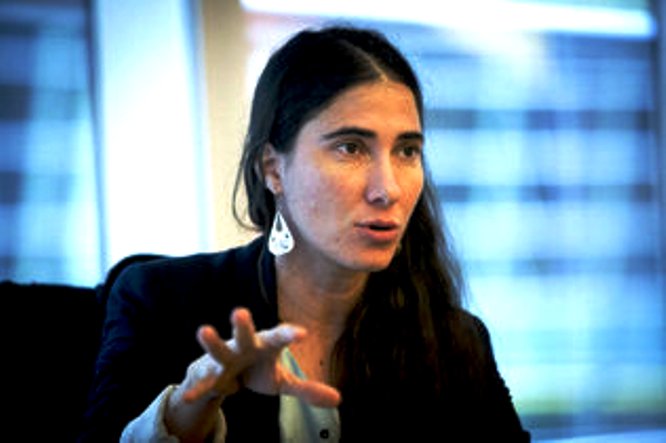