The Cuban Research Institute of Florida International University has just released its 2014 Poll on Cuban-American views towards U.S. policy towards Cuba.

The complete write-up of  the poll can be found here: 2014-fiu-cuba-poll 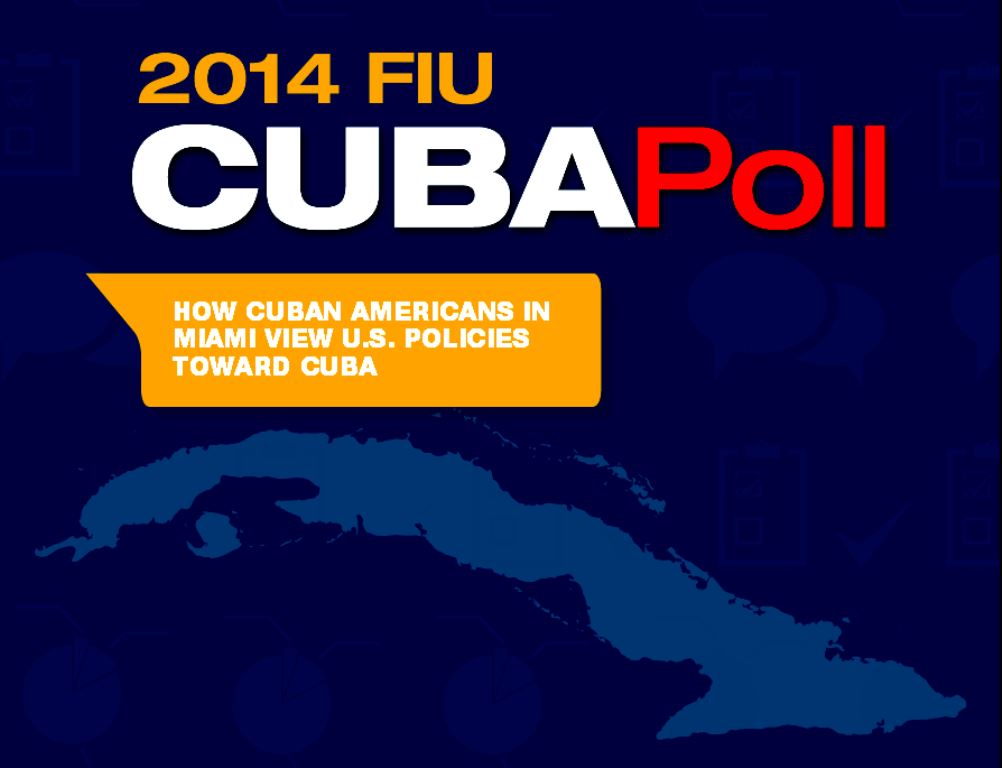 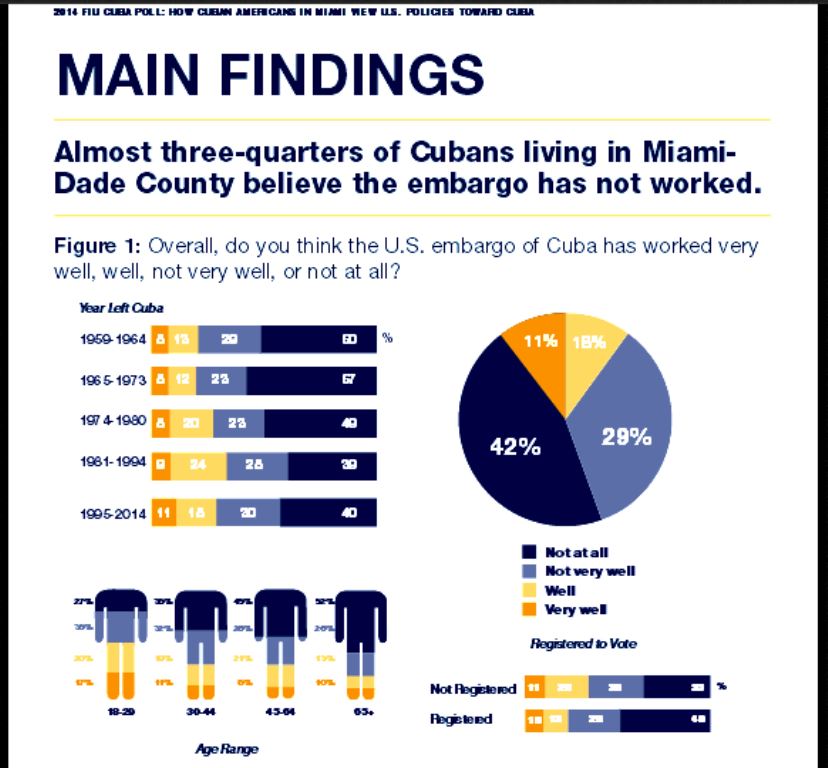 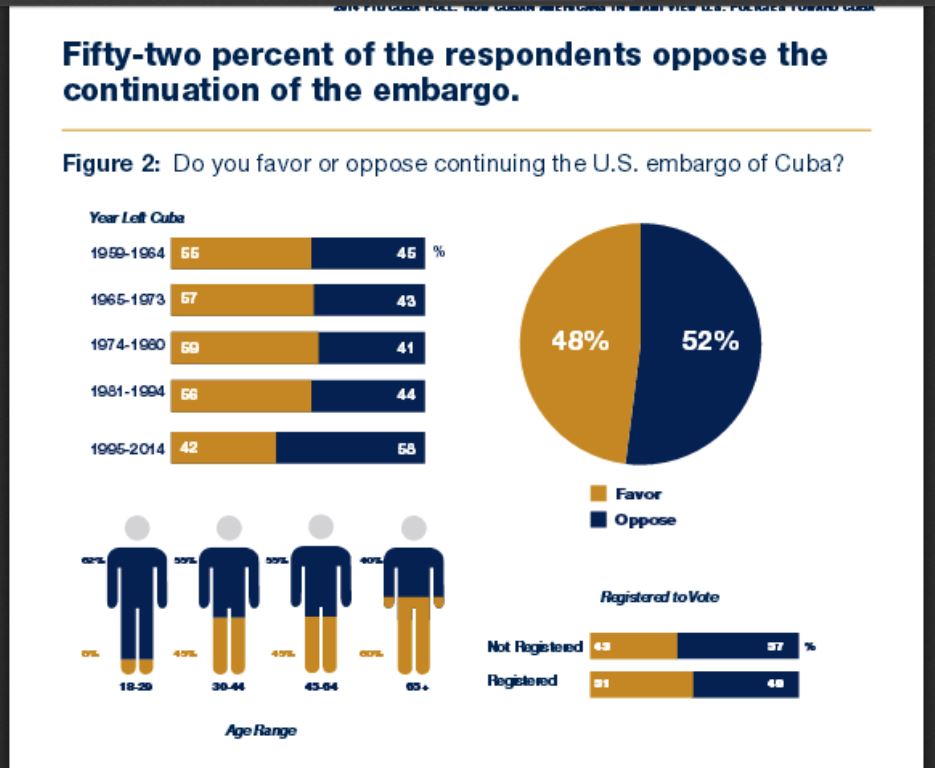 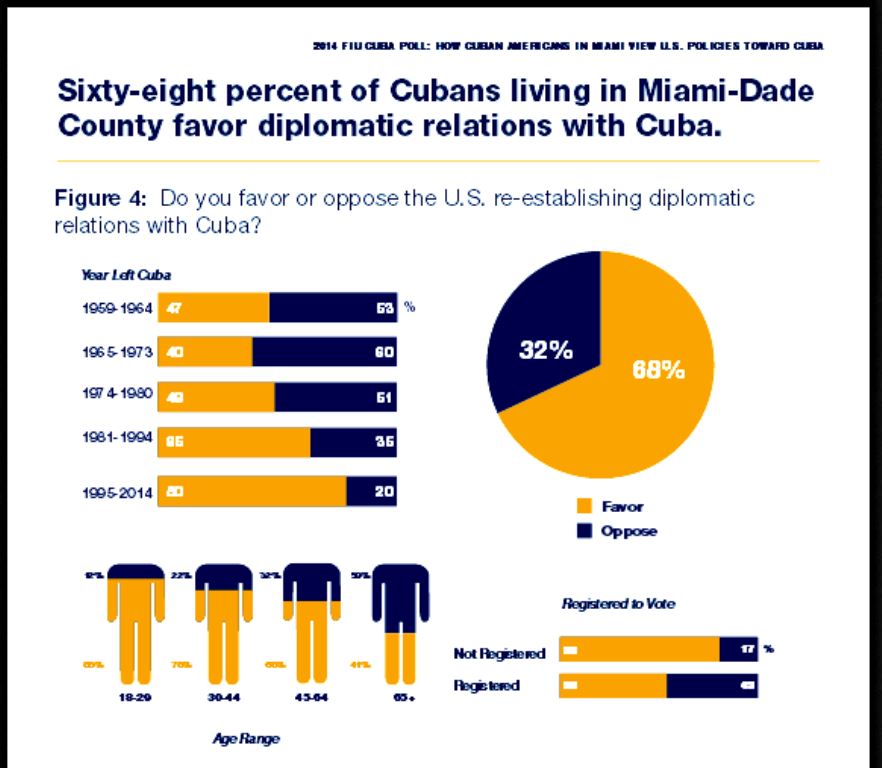 (Reuters) – A survey of Cuban Americans in Miami shows eroding support for hardline Cold War-era policies adopted by the United States against Cuba, with a narrow majority in favor of closer ties with the communist-ruled island.

The poll, released on Tuesday by Florida International University (FIU), found that 52 percent of 1,000 Cuban Americans surveyed in Miami-Dade County oppose continuing the five-decade-old trade embargo against Cuba. That figure edges down to 49 percent among registered U.S. voters.

An even greater majority of those surveyed – 68 percent – favor diplomatic relations with Cuba. A similar number – 69 percent – favor lifting travel restrictions to Cuba for all Americans, according to the poll, which had a margin of error of 3 percentage points. Current U.S. policy allows visits to the island only under tightly controlled licenses for cultural and academic tours.

The results highlight the shift among members of the Cuban diaspora who fled the island nation to the United States to escape the rise of communism in the 1960s and show opinions have grown far less monolithic due to demographic changes.

Conducted between February and May as part of a periodic survey of Cuban Americans dating back to 1991, the poll found that younger exiles who left Cuba more recently were more favorable to changing policy than those who came in the 1960s.

The survey was funded by the Trimpa Group, a Democratic-leaning consulting firm based in Denver that promotes social change, and Open Society Foundations, which funds public policy causes and was founded by billionaire investor George Soros.

Miami represents the heart of the Cuban American community. “The Cuban enclave is changing at all levels,” Guillermo Grenier, an FIU sociology professor who helped lead the survey, told a news conference.

“The trends are clear,” Grenier said, noting that older exiles were dying while 20,000 new Cubans arrive in the United States every year under a migration accord with Cuba.

Only 8 percent of Cuban Americans ages 18 to 29 support continuing the embargo, compared to 60 percent of those ages 65 and older, the poll showed. In 1991, 87 percent of those surveyed backed the embargo compared to 48 percent now. Still, the latest poll found that a majority of Cuban Americans – 63 percent – support keeping Cuba on the United States’ annual list of state sponsors of terrorism, along with countries like Iran, Syria and Sudan.

“The results show that the (Cuban) government and the (Cuban) people are seen differently,” said Grenier. “There’s a certain willingness to throw the embargo under the bus, if there’s an alternative way to exert pressure on the government,” he added.

Asked if they would vote for a candidate who advocated replacing the embargo with support for private businesses in Cuba, 57 percent of registered voters said yes.

A larger majority – 81 percent – of registered voters said they would support a candidate who advocated replacing the embargo with a policy that increased pressure on the Cuban government over human rights.

Critics accused the FIU pollsters of ideological bias, highlighting the Trimpa Group’s lobbying ties to efforts to loosen the Cuba sanctions and promote travel to Cuba.

Mauricio Claver-Carone, director of the pro-embargo group U.S.-Cuba Democracy PAC, pointed to a recent poll conducted for the Miami Herald newspaper that found Cuban Americans support the embargo by a 56 percent to 36 percent margin. That poll, conducted by Miami firm Bendixen & Amandi International, involved a smaller sample of 300 voters with a 5.6 percent margin of error.

“Cuba and the United States, Resistant to sticks and carrots: The difficulty of pressing for change in a police state”, The Economist, Nov 19th 2009

THE WHITE HOUSE, Office of the Press Secrectary, FACT SHEET: REACHING OUT TO THE CUBAN PEOPLE April 13, 2009