HAVANA (Reuters) – Cuba’s Communist government on Friday reneged on its promise to dialogue with artists calling for greater freedom of expression, saying it disagreed with their conditions for the meeting and would not negotiate with “enemies of the Revolution”.

The government had agreed to holding the talks last Friday when hundreds of Cubans staged a rare sit-in outside the culture ministry to protest a raid on the headquarters of dissident artist collective the San Isidro Movement, protest repression more broadly and call for greater freedoms.

While far from a mass mobilization, such rights protests are highly uncommon in the one-party state that is usually quick to crack down on public dissent. The protest illustrated a strengthening of civil society in recent years in part thanks to the rollout of mobile internet that has fostered greater flow of information and enabled people to mobilize more easily.

The sit-in was also unusual in that it brought together self-denominated “artivists” with mainstream artists like actor Jorge Perugorria and pop star Leoni Torres and less well known creatives who do not usually comment on politics, demonstrating a broad unease.

The group of 30 artists, activists and journalists that culture ministry officials agreed to meet with during the sit-in asked for them to be present at the official dialogue they had agreed this week.

But the culture ministry said on Friday it would “not meet with people who have direct contact and receive financing, logistical support and propagandistic backing from the U.S. government”.

The state, which has a monopoly of mass media, has this week waged an all-out rhetorical campaign against them, saying they like other dissidents are mercenaries backed by old Cold War foe the United States seeking to destabilize the one-party state.

State newspapers have denounced the “imperial reality show” and “San Isidro Farce” while evening broadcasts have attacked individual members and linked the crew to alleged calls on social media for terrorist acts.

Members of the crew say the government is trying to discredit them and split them from the rest of the artists. They say they have been prevented from leaving their homes by security forces this week, detained if they did and interrogated.

But the broader group that met with culture ministry officials on Nov. 27, and that now goes by the acronym 27N, issued a statement on Friday stating they were using only “pacific” means to call for their rights, did not respond to interests of foreign governments and aspired to “an inclusive and democratic society.”

A Reuters factcheck found that two social media posts showing shops set on fire and alleging these were terrorist acts committed this week actually took place in February 2020 and December 2008.

Cuba expert Ted Henken at Baruch College in New York said that ultimately what is up for debate is the country’s longstanding cultural policy, based on the famous words of revolutionary leader Fidel Castro to artists and thinkers in 1961 proclaiming “within the revolution, everything; against the revolution, nothing”.

“The government has always been able to separate marginalized activists and the ones that are blessed and controlled by the system,” he said. “It’s deeply significant that this separation was collapsed by this sit-in. This has a much broader base than previous protests” 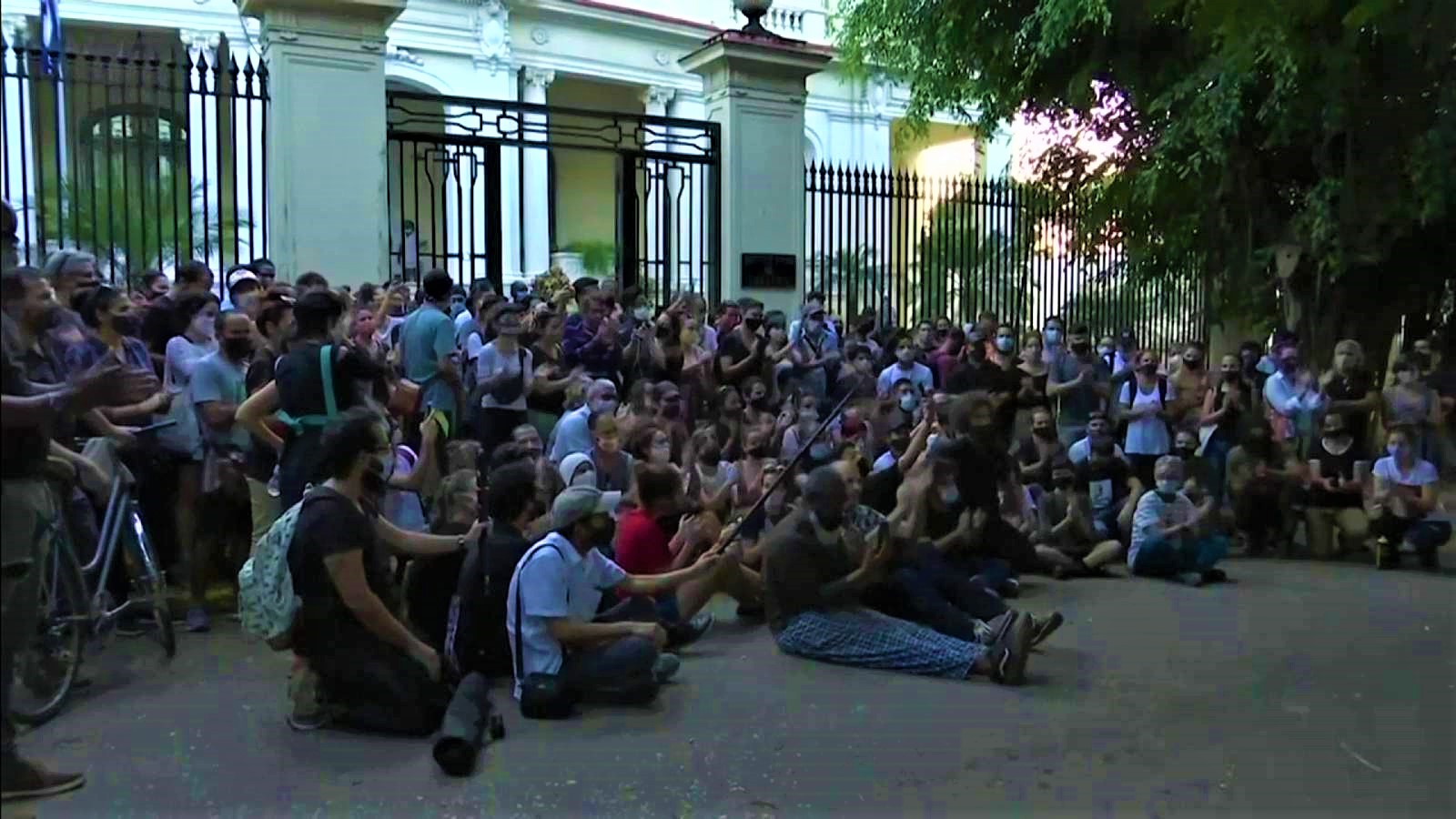 This entry was posted in Blog and tagged Cultural Policy, Human Rights, Opposition, The Arts. Bookmark the permalink.