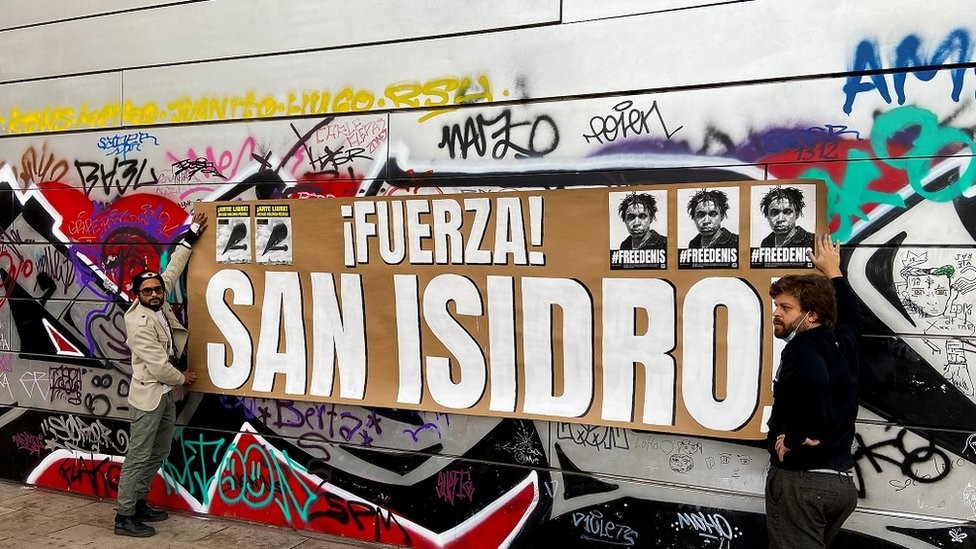 A Cuban dissident group says police have raided its HQ in the capital, Havana, detaining members on hunger strike over the jailing of a rapper.

The San Isidro Movement said some people were beaten, and social media was temporarily shut down to stop images of the raid being shared online.

Rapper Denis Solis was sentenced after a row with a police officer.

Cuban authorities said the raid was carried out over a health violation related to coronavirus.

Founded in 2018, many of its members are artists, musicians, journalists and academics who oppose what they call oppressive measures by Cuba’s communist government.

The movement told BBC Mundo that its HQ – an apartment in the capital – was raided on Thursday night. About an hour after midnight local time (05:00 GMT Friday), the group said three of the 14 people detained were out of contact. Six members have been on hunger strike.

The group is demanding the release of Solis, who was sentenced to eight months in jail for contempt after a verbal altercation with a police officer.

In a statement, Cuban authorities said they carried out the San Isidro raid because a journalist, Carlos Manuel Álvarez, had broken security protocols related to the spread of coronavirus, and was taking part in protests at the building.

“This action took place in full compliance with the law and without violating the citizen rights of any of those involved,” the statement read.

The San Isidro group called it an “absurd” pretext.

The movement has often stirred controversy by mixing art with political activism. As a symbol of civil disobedience, one its members, Maykel Castillo, sewed up his mouth after being summoned by police for questioning.

Human rights NGOs and the US state department have called for Denis Solis to be released, and for the government to engage in dialogue with the San Isidro Movement.

The Cuban government alleges that he and the movement are funded by Washington and are being used to subvert the state. The San Isidro Movement has denied these allegations.

These protests, although unrelated, come amid severe economic strain in Cuba over the global coronavirus pandemic.

This entry was posted in Blog and tagged Civil Society, Opposition, Political System, Politics, The Arts. Bookmark the permalink.