New Book: CULTURE AND THE CUBAN STATE: PARTICIPATION, RECOGNITION, AND DISSONANCE UNDER COMMUNISM

Culture and the Cuban State examines the politics of culture in communist Cuba. It focuses on cultural policy, censorship, and the political participation of artists, writers and academics such as Tania Bruguera, Jesús Díaz, Rafael Hernández, Kcho, Reynier Leyva Novo, Leonardo Padura, and José Toirac. The cultural field is important for the reproduction of the regime in place, given its pretense and ambition to be eternally “revolutionary” and to lead a genuine “cultural revolution”. Cultural actors must be mobilized and handled with care, given their presumed disposition to speak their mind and to cherish their autonomy.

This book argues that cultural actors also seek recognition by the main (for a long time the only) sponsor and patron of the art in Cuba: the “curator state”. The “curator state” is also a “gatekeeper state,” arbitrarily and selectively opening and closing the space for public expression and for access to foreign currencies and the global market. The time when everything was either mandatory or forbidden is over in Cuba. The regime seems to have learned from egregious mistakes that led to a massive exodus of artists, writers and academics. In a country where things change so everything could stay the same, the controlled opening in the cultural field, playing on the actors’ ambition and fear, illuminates a broader phenomenon: the evolving rules of the political game in the longest standing dictatorship of the hemisphere. 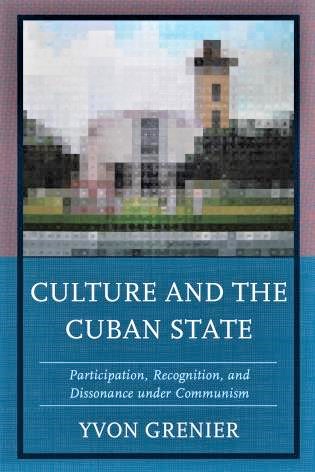 Yvon Grenier, a sharp-eyed observer of culture and politics in Latin America, provides an illuminating analysis of the complex relations between Cuba’s intellectuals and the Castro regime. Exceeding the revolutionary rhetoric which has impressed much of the research on Cuba in the past, Grenier looks seriously and rigorously into the state’s cultural policy over time, showing how changes in that policy from repression to liberalization and back have not altered the fundamental position of Cuba’s artists, writers and political scientists, a position marked by fear, censorship, self-censorship, and the need to perform intellectual acrobatics. A must-read for anyone concerned with the fate of creative imagination and critical thinking in authoritarian states.
Michael Keren, University of Calgary

Everywhere in the world intellectuals, writers, and academics are a different breed who seek participation and recognition from their public and peers as well as their state. In his analysis of Cuba’s cultural policy during the Cuban revolution, Yvon Grenier carefully shows that in a communist state that quest is particularly difficult and dangerous. In Cuba, a line was drawn early on between those who work within the revolutionary parameters and gain acceptance, though at times managing to be quite critical (dissonance) and those who work outside of it, meeting rejection and ostracism (dissidence). Yet, through his analysis of the hardships, vicissitudes, and circumstances of the lives of important Cuban intellectuals (such as Jesús Díaz, Tania Bruguera, and Leonardo Padura), Grenier further shows that where the line lies can be rather unclear, leading to some crossing it unwittingly while others place their stories in another century and another place to avoid it. Grenier shows that the political control of the cultural life in a one party state like Cuba results not only in censorship but also in self-censorship. For everyone who cares about the quality of intellectual life in Cuba and elsewhere, this is a book not to be missed.
Silvia Pedraza, University of Michigan

This book is a path-breaking work that convincingly turns the conventional wisdom about the ‘cultural policy’ of the Cuban Revolution on its head. Most compelling and original is the author’s nimble analysis that distinguishes between a set of unwritten but untouchable “primary parameters” and another set of “secondary” and contextually permeable parameters that such cultural actors must constantly negotiate in order to avoid being dealt “out of the game” of Cuban culture as played on the island under the Revolution. The strongest contribution of the book is to change the focus on cultural freedom in Cuba from one that focuses exclusively on the state to one that focuses equally on the ways Cuban writers, artists, and intellectuals negotiate with the state, in search not only of greater creative freedom but also (and ironically) state recognition and promotion.
Ted A. Henken, Baruch College