Cuba announced Wednesday that it had detected the first case of the Zika virus on the island, which had been one of the last nations in the Western Hemisphere free of the disease.

The Ministry of Health said in state media that a 28-year-old Venezuelan post-doctoral student in gastroenterology arrived in the country Feb. 21 and a day later came down a high fever and rash. The government says the woman was under medical quarantine in Artemisa province outside Havana with other newly arrived doctors when her symptoms were detected.

The Health Ministry made no mention of any case of Zika transmitted inside Cuba.

President Raul Castro announced Feb. 22 that the country was militarizing its fight to kill disease-carrying mosquitos, assigning 9,000 soldiers to spray for the insects nationwide. Since then, soldiers, police and health workers have launched an intense door-to-door effort to fumigate for mosquitos.

Gaps had been increasingly obvious in the effort to spray homes and businesses for the Aedes aegypti mosquito, which has infected thousands of Cubans with the dengue virus and dozens with chikungunya, a disease that causes fever and severe joint pain. Cubans frequently claimed allergies or asthma to put off fumigation crews composed of public health workers and teenagers completing obligatory military service.

Those days appear to be ending as troops deployed across the country with hand-held foggers are now armed with the threat of fines for anyone who resists fumigation and fog-spraying trucks and small airplanes are blanketing the capital and other cities with white clouds of pesticide.

In Cuba’s airports and cruise ship terminals, crews of white-clad doctors are monitoring incoming travelers for high temperatures or other signs of illness. Medical officials said the fight against Zika had taken on increasing urgency as Cuba’s hot, humid spring and summer draw near.

Cuba earns billions of dollars a year from programs that dispatch doctors to allied countries like Venezuela and Brazil and bring medical students to Cuba. Wednesday’s report appeared to imply that those medical professionals were now being quarantined on return.

Pregnant women or those hoping to become so should stay away from Brazil and other regions of Latin America affected by the Zika virus, according to revised government advice.

The weight of evidence that Zika is to blame for the surge in babies with brain damage in Brazil has now tipped the balance, Public Health England (PHE) feels.

The previous guidance advised pregnant women to consider staying at home, consult their doctor if they intended to travel and take precautions against mosquito bites. Now it advises them not to go.

“It is recommended that pregnant women should postpone non-essential travel to areas with active Zika transmission until after pregnancy,” says the advice.

The update may cause some women who had hoped to travel to the Olympics in Rio de Janeiro in the summer to abandon their plans – even though the Aedes aegypti mosquito, which has been blamed for transmission of the virus, does not breed or bite in the summer.

Prof Paul Cosford, director for health protection and medical director at PHE, said: “As our knowledge of the Zika virus, and the evidence linking microcephaly to Zika infection, becomes clearer, a more precautionary approach is warranted. This advice will be kept under review and updated as more information becomes available.”

The decision to upgrade the advice follows the emergence of an increasing amount of evidence linking the Zika virus to microcephaly – the small heads in babies growing in the womb that can cause brain damage.

HAVANA (AP) — Olive-clad soldiers are going door-to-door across Cuba, filling houses with mosquito-killing fog in a nationwide mobilization to keep the Zika virus out of one of the last countries in the hemisphere without it.

President Raul Castro announced this week that he was throwing 9,000 military personnel and hundreds of police into what he called Cuba’s “inadequate” fight against the mosquito that carries the virus linked to birth defects and paralysis elsewhere in Latin America.

“Our people will know how to demonstrate their ability to organize and maintain the public health achievements of the revolution and prevent our families from suffering,” Castro declared. “We must be more disciplined and demanding than ever before.”

Castro’s call to action included an unusual admission of deficiencies in Cuba’s vaunted free neighborhood-level health-care system, which has suffered in recent years from lack of equipment, short-staffing and low morale among poorly paid state health workers. It was also a test of the communist government’s once-legendary ability to marshal the entire country behind efforts ranging from civil defense to bigger sugar harvests to disease prevention.

The government announced Tuesday that it was activating the Committees for the Defense of the Revolution, a neighborhood watch organization that enforced government dictates for decades but has lost importance in recent years. The government said that committees across the country would distribute anti-Zika information to every Cuban and inspect at-risk sites for mosquitoes in coming days.

Gaps have been increasingly obvious in the effort to spray homes and businesses for the Aedes aegypti mosquito, which has infected thousands of Cubans with the dengue virus and dozens with chikungunya, a disease that causes fever and severe joint pain. Cubans frequently claim allergies or asthma to put off fumigation crews composed of public health workers and teenagers completing obligatory military service. Unwilling to force homeowners to let them in, the crews often mark the residence as fumigated and move on to the next house or apartment.

Those days appear to be ending as troops deployed across the country with hand-held foggers are now armed with the threat of fines for anyone who resists fumigation.

“Cuba has a series of advantages: It’s an island, it has a homogenous population and a health infrastructure that generally reaches every street corner,” said Jaime Torres, director of tropical medicine at the Central University of Venezuela. “And its political system allows it to take measures, including imposing punishments, that are harder to impose in other places.” 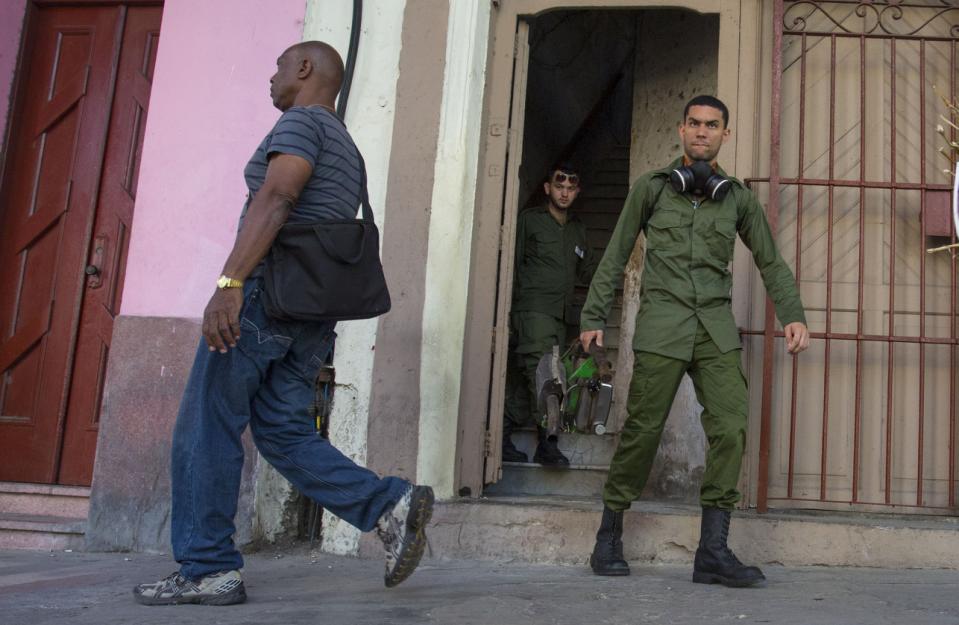 Soldiers carrying a fumigating machine leave a home after spraying for mosquitos in Havana, Cuba,

In Cuba’s airports and cruise ship terminals, crews of white-clad doctors are monitoring incoming travelers for high temperatures or other signs of illness. Medical officials said the fight against Zika had taken on increasing urgency as Cuba’s hot, humid spring and summer draw near.

“The objective is to diminish the adult mosquito population ahead of the coming critical months,” said Reinaldo Garcia, head of anti-mosquito efforts for a neighborhood health clinic in Havana.

As soldiers fumigated Wednesday, medical students were knocking on doors alerting homeowners to watch for symptoms such as fever and conjunctivitis. State-run television and radio featured a constant stream of educational messages about Zika, which has been linked to the birth defect microcephaly.

“Although there is no sign of that disease, we want to eliminate the transmitter, eliminate the chain, so if it enters the country there is no way to transmit it,” Dr. Osvaldo Mendoza of the Public Health Ministry said as he supervised a crew of military fumigators.

Medical workers were ready to move into any area where a possible Zika case is detected, quarantining and testing anyone who lives within 500 meters, said public health official Dr. Lorenzo Somarriba.

“Everyone’s talking about it,” said Suset Valdes, a 19-year-old Havana resident who is six months pregnant. She said pregnant women in her maternity ward were protecting themselves with repellent-soaked mosquito nets.

Carlos Espinal, director of the global health program at Florida International University in Miami, said that while it was virtually certain that Zika would arrive in Cuba, he was hopeful the island’s health system would prevent the virus spreading as it has elsewhere in Latin America.  “It’s inevitable, but the Cuban disease-monitoring system is sure to greatly mitigate the negative impact in the community,” he said.

Valdes’ mother, Dolores Hernandez, 51, said she felt better with her daughter off the streets of their Old Havana neighborhood, where garbage had been piling up for weeks or months without any government reaction.  “It’s horrible how people threw trash in Old Havana,” she said. But now “they’re picking it up, running around, unclogging their drains. Now, they’re really getting going.”

This entry was posted in Blog and tagged Health, Medical System, ZIKA Virus. Bookmark the permalink.