As Cuban president Raúl Castro met Mexican President Enrique Pena Nieto on Friday to strengthen trade ties and smooth over past tensions, a new political problem was mounting in the south with the huge influx of Cubans flowing across Mexico’s border.

Almost 6,500 Cubans arrived in Mexico en route to the US in the first nine months of the year, more than five times as many as a year earlier, according to official statistics. And the numbers have continued to surge. Mexico’s national migration institute, INM, said that more than 8,000 Cubans have been processed in Mexico so far this year.

The national human rights commission, CNDH, noted that over a thousand Cubans turned up at the Tapachula migratory station in the space of one week in October, overwhelming migration officials’ capacity to attend them. 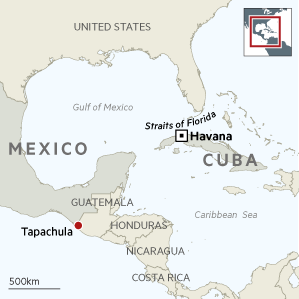 Many Cubans have spent days sleeping rough outside the Tapachula station awaiting processing. Local human rights groups have begun to open their doors to them amid the growing humanitarian crisis.

The Cubans are responding to rumours on the island that the US will soon remove their right to automatic asylum upon reaching US soil. The 1966 Cuban Adjustment Act deems Cubans fleeing the island to be political refugees, a product of the Cold War that sits uncomfortably with the recent restoration of diplomatic ties between Havana and Washington.  The law has already been amended once before, when the US implemented the “wet-foot, dry-foot” policy in 1995, enabling Cuban migrants caught at sea to be repatriated.

The Cubans, meanwhile, are sceptical that the gradual lifting of economic restrictions will improve their lives. Political freedom and economic opportunity, they say, are still lacking on the island.

“The [trade] opening is good, but it is not enough to change the culture in Cuba,” said López, 50, who had arrived at the Tapachula migration office with his wife and two grown children after a gruelling, month-long slog through South and Central America.

López, who asked to be identified with a pseudonym, had earned the equivalent of $25 a month working for the government in Havana. Fearing that the US law might change, in September he and his family made plans to join their relatives in North Dakota, selling their car and scrounging all of their savings to afford the trip, which cost $2,500 per person.  Like so many Cubans, López hopes to find better-paid work in the US. “America is a different democracy, it is a different opportunity,” he said.

While trade barriers in Cuba are slowly being chipped away, the US has yet to lift its 53-year old economic embargo on the Communist-run country, and political reform will take time.  Moreover, few people expect Cuba to become a market economy without going through some economic turbulence.

“Cubans understand that there is a good chance things will get worse before they get better,” said Duncan Wood of the Woodrow Wilson Center in Washington.  “Changing the economic culture of the country is going to be enormously disruptive, so I am not surprised that the number of Cuban migrants in Mexico is up.”

The lifting of travel restrictions in Cuba in 2013 has facilitated this process, with many countries along the route now providing Cubans with transit visas.

Also, increasing numbers of Cubans are choosing the circuitous trek across eight borders because it is less risky and cheaper than sailing directly to Miami. Cubans in Mexico told the Financial Times that the journey overland is half the price of the perilous sea voyage along the Florida Straits, which reaches $10,000.

Mexican immigration officials warn that the numbers arriving across the border continue to climb. Mario Madrazo Ubach, director-general of immigration control at the INM, said: “If 300 people show up in the same moment at the same station, what can we do, build a bigger station?”

This entry was posted in Blog and tagged Emigration, US-Cuba Normalization. Bookmark the permalink.