THIS IS CUBA’S NETFLIX, HULU, AND SPOTIFY – ALL WITHOUT THE INTERNET

How media smugglers get Taylor Swift, Game of Thrones, and the New York Times to Cubans every week. VOX; Original article here: CUBA’S NETFLIX, HULU, AND SPOTIFY By Johnny Harris on September 21, 2015

In Cuba there is barely any internet. Anything but the state-run TV channels is prohibited. Publications are limited to the state-approved newspapers and magazines. This is the law. But in typical Cuban fashion, the law doesn’t stop a vast underground system of entertainment and news media distributors and consumers.

“El Paquete Semanal” (The Weekly Package) is a weekly trove of digital content —everything from American movies to PDFs of Spanish newspapers — that is gathered, organized, and transferred by a human web of runners and dealers to the entire country. It is a prodigious and profitable operation.

I went behind the scenes in Havana to film how El Paquete works. Check out the video above to see how Cubans bypass censorship to access the media we take for granted.

There are two Paquete king-pins in Havana: Dany and Ali. These two compete to develop the best collection of weekly digital content and in the fastest turnaround time possible for their subscribers. It’s a competitive market playing out in the shadows of a tightly controlled communist economy.

Paquete subscribers pay between $1 and $3 per week to receive the collection of media. It’s either delivered to their home or transferred at a pickup station, usually in the back of a cellphone repair shop, a natural cover for this type of operation.

Dany relies on data traffickers to deliver the files, but said he didn’t know how those sources obtained the content in the first place. I gathered that most of it is being digitized via illegal satellites that are hidden in water tanks on rooftops. It’s unclear how they get ahold of the content sourced from the internet (digital news publications, YouTube videos, and pirated movies, for example). Only 5 percent of Cubans can access the uncensored World Wide Web, and when they do, the connection is horrendously slow. It’s not the type of connection that would support downloading hundreds of gigs of content every week. Instead, some speculate that content is physically brought onto the island by incomers from Miami.

I sat down with Dany in his pink-walled apartment in Havana. While I expected a mob-like character to be at the root of this extensive black market of pirated media, I found a 26-year-old guy who looked more like a stoned surf bum than the conductor of a giant black market operation.  Dany’s office shows off a lot more brawn than he does. It’s a simple room with two gigantic computers, their innards visible, tricked-out lights arbitrarily flickering. Hard drives are littered around the room, stacked and labeled. Two large screens are full of Windows file directories, and in the corner of one of the screens is a live feed from Telemundo, a popular Spanish-language station, with the words “Grabando” (recording) in the corner.

“Everybody has their responsibility,” Dany told me. “Everyone gathers a certain type of content, and they bring it to me. I organize it, edit it, and get it ready for distribution. And then we send it through our messengers.”

This is hard work. “A lot of the time is spent finding and embedding subtitles” he laments. Much of the content is pirated from American TV and movies. He and his team have scour the internet for any existing subtitle files.

The government hasn’t tried to stamp out El Paquete, and Dany works to keep it that way. “We don’t put anything in that is anti-revolutionary, subversive, obscene, or pornographic. We want it to stay about entertainment and education,” he says, and I catch a glimpse of the shrewd business behind the baby face and board shorts.  It might as well be Netflix

A look into an edition of El Paquete reveals a vast array of content ranging from movies that are in US theaters right now to iPhone applications. Havana-based artist Junior showed me around. He’s a pensive and gentle 34-year-old who is remarkably talented, judging by the stunning art pieces that hang from the wall. Junior paints and tattoos full time but he used to be a Paquete dealer. He’s now just a consumer. He takes me through the 934GB of data he has recently transferred from his provider.

I’m immediately struck by how polished the Paquete system is. As Junior files through the meticulously organized files, I realize it mirrors the consumption of a typical internet user. He opens the movie folder, and we browse through dozens of movies, many still in US theaters. All of them come in HD and with subtitles and poster art as the thumbnail of the file. The videos are high-quality with accurate subtitles. I have to remind myself that we are not browsing Netflix, but instead looking at an offline computer that is displaying content that has physically traveled to get here. The methods couldn’t be more different, but the result is strangely similar.

He moves on to TV shows. “So do you think they have—” I start, but am interrupted. “They have everything,” Junior says emphatically. Sure enough, the show I was thinking of, Suits, was there, with the latest episodes ready to watch. 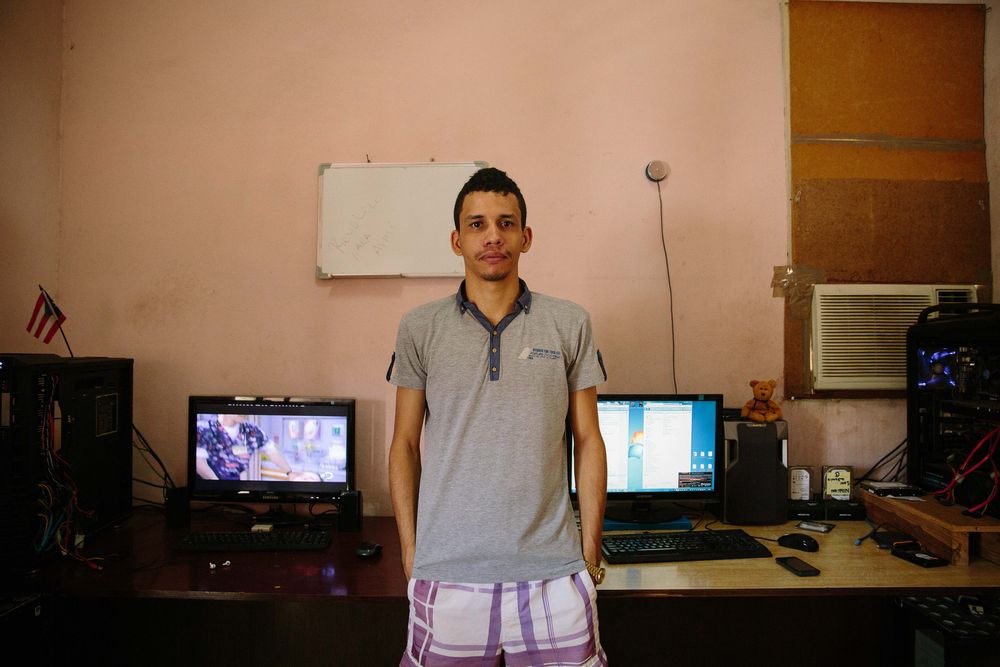 We continue to browse and look into some of the more routine but most interesting parts of El Paquete: There are folders dedicated to antivirus software that can be updated weekly to the latest versions. “But there’s no internet, so there can’t be viruses,” I say. “Most of this stuff has touched the internet in some way. This software protects against anything that has snuck its way on into the content,” Junior says.

Junior clicks over to the “Apps” folder and shows me a smorgasbord of iOS and Android apps. Many are gaming apps with updates that can be loaded in every week. But there is another called “A la mesa,” a Yelp-type app that helps connect clients to restaurants in Cuba using maps, reviews, and in-app menus. Then there’s the PDF folder, which holds newspapers, magazines, and screenshot material from dozens of online publications, everything from tech news to sports. It’s the internet in a box.

In addition to the subscription fees, revenue for El Paquete comes from a classifieds section called “Revolico.” Within El Paquete, you click a file that opens Revolico in your browser. But it’s an offline version that runs from a file structure on your local computer. There, you can click around as if you were browsing Craigslist, looking at thousands of listings of everything from house rentals to big-screen TVs to car tires.

Sellers pay to list their items, and you can get a premium listing if you pay more. Revolico is the cash cow of El Paquete. It also happens to be one of the first semblances of an advertising market for Cubans who have lived in a world of central planning and price control.

The depth and breadth of El Paquete is astounding, so much so that I, an American who lives and works on the uncensored internet, feel a twinge of envy that I don’t have El Paquete delivered to my house every week for $2.

When I asked Dany if he is afraid that the internet will wipe out his operation, without missing a beat, he replied, “Nah. We offer a product that is like one giant webpage where you can see all the content you want for a very low price. The internet might take over some clients, but we offer something different and very effective.”

“Speed is key to beating the competition,” Dany said. When asked how quickly he can get a movie or TV show after it airs in the US he says, “The next day.” Last year, Dany started sending a hard drive on a plane to the far corners of the island.

After spending a week in Cuba, it was refreshing to talk to someone with the appetite to grow an enterprise. Most people I spoke to in Cuba work for the state and have zero incentive to deliver anything above the bare minimum. They get paid the same either way. Even the private restaurants lack the fervor of a competitive business, since the economic environment they work in is still completely controlled even if they themselves are private.

But in Dany’s office, I felt the thrill of cunning innovation and strategy at work. I got the sense that something big is happening. And indeed, I wasn’t just standing in some dingy apartment, but rather in what may be largest media distribution company in the history of Cuba. 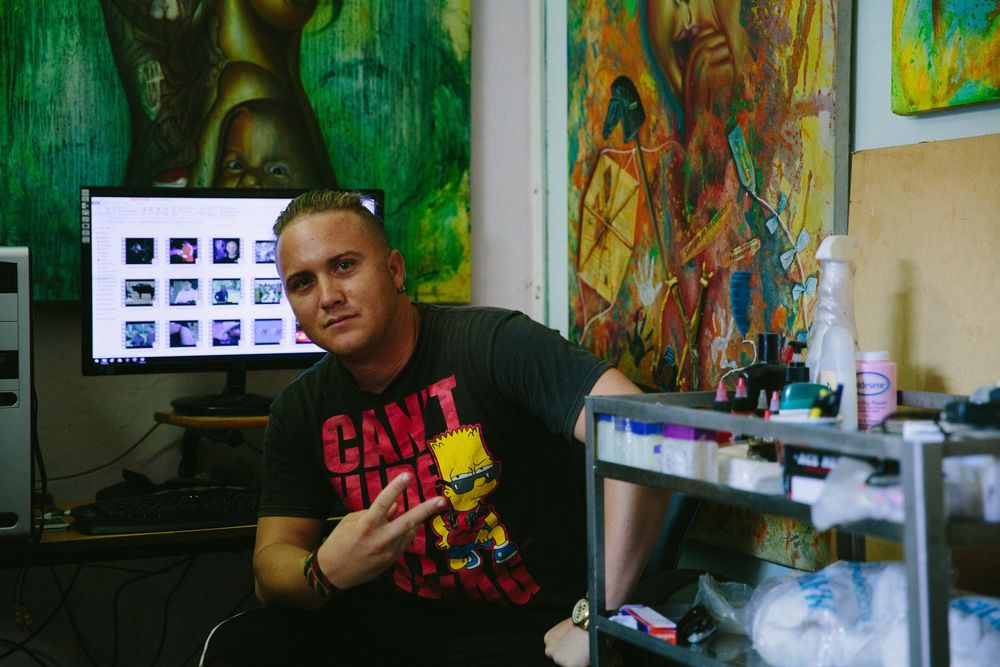