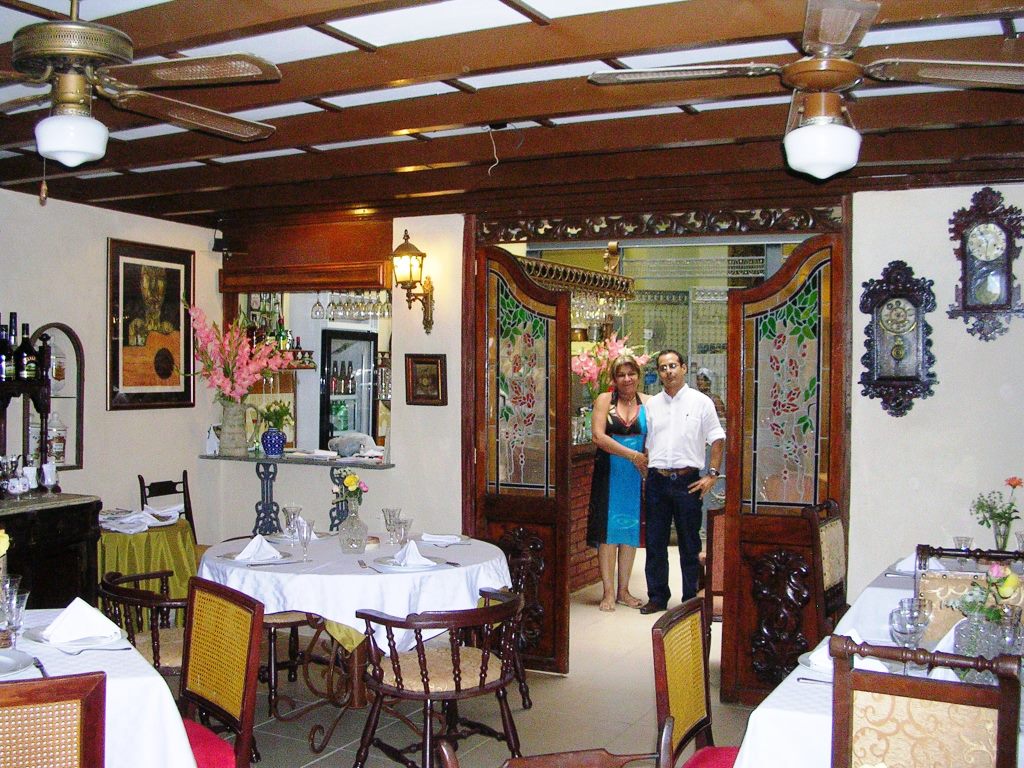 The “Dona Eutimia” Paladar, by the Plaza de la Catedral (photo by A. Ritter)

HAVANA — Private restaurants in Havana are exploding in number and soaring in quality, providing a treat for visitors and a surprising bright spot in a nation better known for monotonous food and spotty service.

Havana now boasts nearly 2,000 private restaurants offering a range of cuisine from traditional Cuban to Russian, Spanish, Vietnamese and other ethnicities. From caviar to lobster bisque and on to pizza, everything seems to be available. Usually set in private homes, some of the restaurants offer Old World charm with starched white tablecloths and real silverware. Heirlooms fill shelves. Other restaurants hunker in basements or peer from walk-up seafront buildings, sometimes with funky or retro décor.

“Gastronomy is on the rise in our country,” said Jorge Luis Trejo, son of the proprietors of La Moraleja, a restaurant in Havana’s Vedado district with wild rabbit flambé and chicken confit on the menu. His family’s restaurant opened in January 2012. Donning the chef’s apron is a cook who once worked in France, the Netherlands, Greece and England, Trejo said.

“We try to make traditionally Cuban dishes with fusion sauces to entertain our clients,” he said.

At the end of each meal, waitresses carry a humidor to diners and offer them a choice of complimentary hand-rolled cigars.

Private restaurants first arose in Cuba in 1993 amid the collapse of the Soviet Union, Cuba’s longtime patron, only to be reined in as authorities worried that small eateries were relying on pilfered supplies and surpassing the legal limit of 12 chairs, essentially three tables. The restaurants were known as paladares, a Spanish and Portuguese word that means palates, a moniker taken from the establishment of a food vendor in a popular Brazilian soap opera. For periods in the 1990s, small restaurants could offer neither seafood nor beef, which were needed for the official tourist industry. Owners were ordered to buy at retail prices in official stores. Most employees had to be family members.

Those rules drove most restaurants out of business, choking them with a web of taxes and arbitrary enforcement that underscored how wary Cuba’s communist officials were of private enterprise. By 2010, state media reported that as few as 74 private restaurants were operating in Havana.

Then things began to change. Fidel Castro’s brother, Raúl, who’d taken control of the government, ordered more flexible rules for restaurants at the end of 2011, raising the limit on chairs to 50 and issuing new licenses. There are still rules to be skirted, and supplies can be hard to come by, but a rebirth is taking place.

“There’s undeniably a boom, a significant increase in both the numbers of people who have licenses in the food service area and the emergence of a haute cuisine, or as they say in Cuba cocina de autor,” or creative nouvelle cuisine, said Ted Henken, a Cuba expert at Baruch College in New York who’s written about the phenomenon.

Today, Havana is dotted with private restaurants with elaborate menus, identifiable only by single small signs on the outsides of buildings.

In Cuba’s moribund economy, bad service is the norm in most offices, hotels and state-run businesses, but not in the private restaurants, which often have the cozy feeling of private dining since they occupy what once were people’s homes.

“You feel like, ‘Oh, I’m in someone’s old living room, and sipping a mojito,’ ” Henken said.

It’s a feeling that more Americans may experience. On Dec. 17, President Barack Obama and Raúl Castro announced the re-establishment of diplomatic relations, broken in 1961. Obama also said he’d further relax restrictions on U.S. citizens’ travel to Cuba without lifting the long-standing trade embargo, which only Congress can do.

The easing of U.S. rules will include permitting U.S. banks to accept credit card transactions conducted in Cuba. Many Cuban restaurateurs await a growing flow of American visitors.

At Paladar Los Mercaderes, which sits on a bustling pedestrian street in renovated Old Havana, handsome waiters in crisp black uniforms buttoned to the neck take orders in a multitude of languages. Modern Cuban art adorns the walls. Musicians croon Cuban ballads as breezes waft through the high-ceilinged rooms. Among the entrees, one could pick from smoked pork loin in plum sauce ($15.75), filet mignon in mushroom sauce ($18), shrimp risotto ($17) or a grilled seafood platter with lobster tail (variable price), among other dishes.

“We built a restaurant like one we’d like to go to,” said Yamil Alvarez, one of three owners of the business, which opened in December 2012. “We bet on hiring young people who are well educated but without any experience.” “We’ve got boats fishing for us, so we always have fresh fish. We’ve got a contract with a farm for fresh produce,” said Alvarez, an engineer who was once a guide at a cigar factory.

While Alvarez aims for a bit of glam, or what he labels a “unique experience,” other restaurants shoot for different diners, mostly foreign but also some Cubans with access to hard currency.

El Litoral, a trendy spot on the seaside boulevard in Vedado, is filled nightly with diplomats, artists, well-heeled tourists and a smattering of Cubans. Opened a year ago, the restaurant offers a high-end menu that includes a soupçon of molecular cooking (foams), puff pastry entrees, a roasted seafood platter, and a kebab of shrimp and bacon in the fresh split-pea soup, among other offerings.

A different clientele comes to Nazdarovie, mainly those with connections to the former Soviet bloc but also those drawn by Soviet kitsch. The name is a toast to one’s health.  “This restaurant is inspired by the memories and nostalgia felt by the thousands of Cubans who spent many years of their youth studying in the USSR,” the menu notes.

A bust of Lenin peers out from the bar. Copies of Sputnik, a magazine, and matryoshka dolls fill shelves. In a decidedly modern touch, big red art deco lamps shine above deep black tables. A terrace looks out on the sea. The food, far from bland, includes borscht, stroganoffs, chicken tabaca and the shashlik kebabs popular in Eastern Europe.

“The chef is Cuban but he studied at the Cordon Bleu school in Miami,” said Yansel Sergienko, a 22-year-old bartender sporting a visorless Soviet naval cap.

There still is a Wild West feel to Havana’s private dining scene. Many restaurateurs must skirt the rules to keep their larders filled, employing “mules” who travel to Mexico, Spain and Florida to bring back supplies and more exotic ingredients. Until the Castro government gets out of the way of the growth and clarifies regulations, the Havana restaurant scene won’t truly take off, experts say.

“You have to be partly a wily rule bender” to keep restaurants in business, Henken said, “and that needs to be solved before Havana becomes a tourist draw for people on the culinary circuit. . …….. . Now it’s more of a curiosity than an eater’s paradise.” 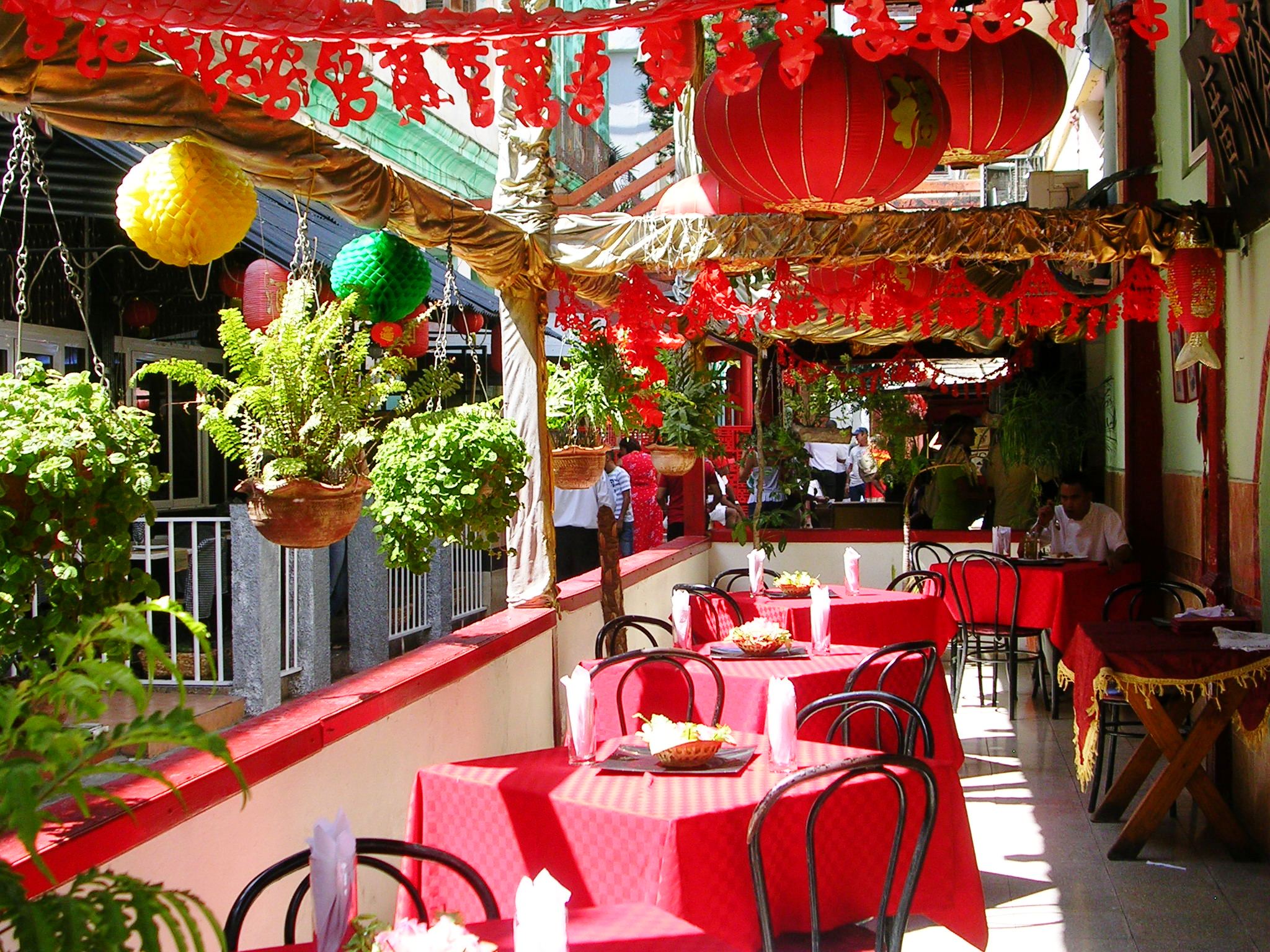 Quasi-Paladar Restaurant in the Barrio Chino 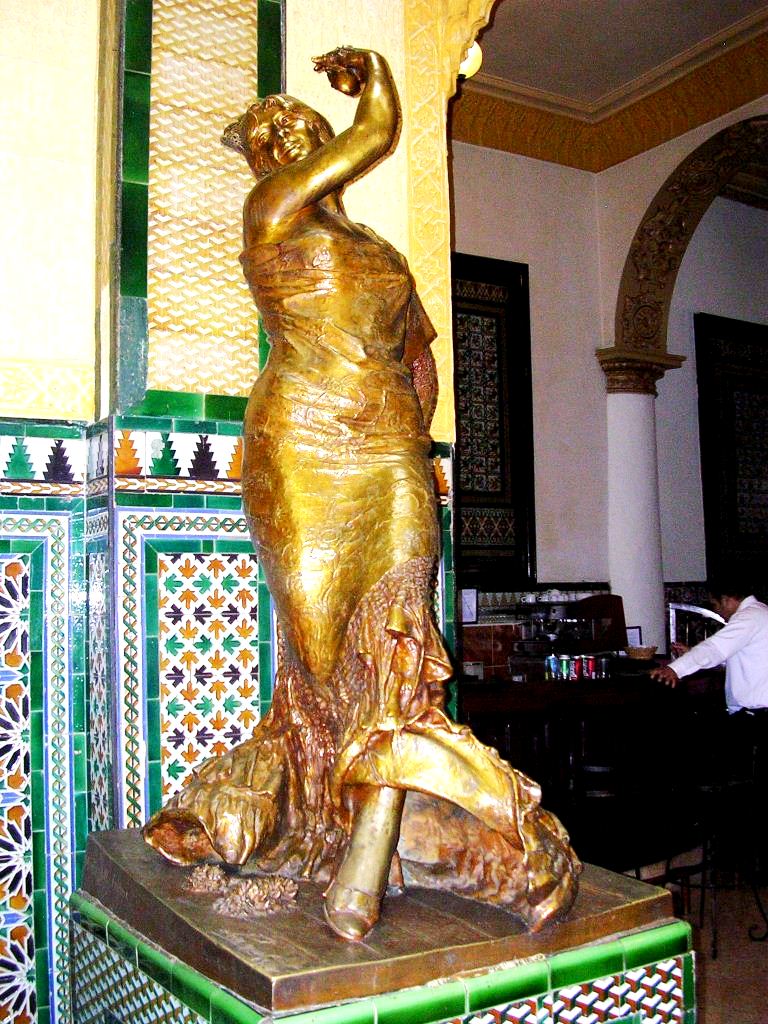