This volume is a co-produced University of Havana / Harvard volume edited by Jorge Domínguez, Omar Everleny Pérez Villanueva, Mayra Espina Prieto and Lorena G. Barberia. Its objective is to describe and diagnose some of the central economic and social challenges that Cuba faces and to analyze some policy alternatives for meeting these challenges. The analyses are written by the University of Havana analysts who are among the strongest and most authoritative in their areas. These are accompanied by commentaries from professors at Harvard and the Federal University of Rio de Janeiro. The papers were prepared before the presentation of the government’s preliminary reform program, as outlined in its November 2010 Guide, though Domínguez’s introduction was written on the eve of the April 2011 Sixth Party Congress and draws on the authors’ analyses as well as the government’s proposals. Fortunately, the University of Havana authors present analyses of the key issue areas in an ambitious and long-term frame that goes beyond the discussion in the Guide and therefore does not read as dated. 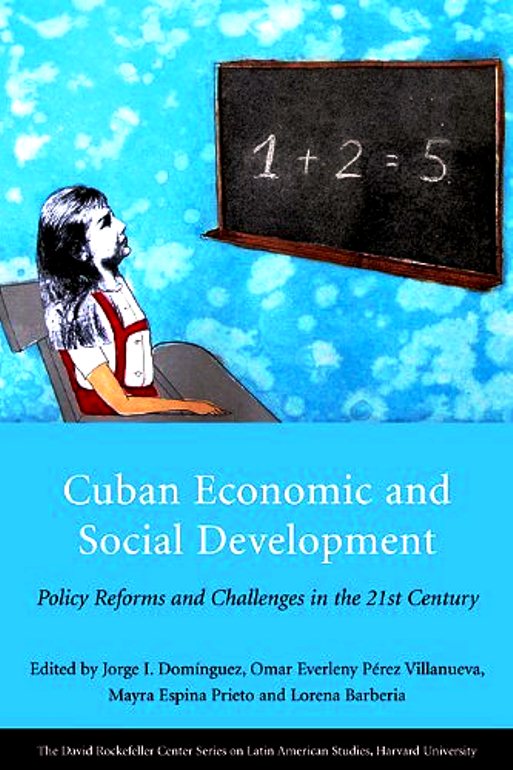 The opening chapter by Pérez Villanueva presents a summary overview of Cuba’s economic performance during the “Special Period” to 2010. His analysis leads to the conclusion that, “economic reform should be seen as the first of the structural changes that the country requires. Cuba’s economic problem is that the current economic system cannot serve as a starting point for the country’s development.” (Villanueva 16) He then proposes a variety of policy changes, some of which have in been incorporated into the Government’s policy reform program, for example ending rationing and state regulation rather than direct management of enterprises.

Two essays on Cuba’s dual monetary and exchange rate system are included from Vidal Alejandro, formerly with the Banco Central de Cuba. The first focuses on the sources, character and cure of the monetary/exchange rate duality. Of special interest is the section proposing a set of policy reforms that provide a strategic approach for the establishment of a single currency.  Vidal Alejandro’s second essay is a more technical analysis of the international economic crisis of 2008-2009 and its repercussions for Cuban monetary policy.

Armando Nova González, who by now must be considered the “dean” of agricultural analysts in Cuba, has contributed two essays on Cuban agriculture. The first outlines the reforms of the early 1990s, analyzes and evaluates their impacts, and presents the range of policy changes required to resuscitate agricultural production, some of which have begun already. The second chapter then analyzes the impacts of the 2007-2010 reforms implemented after Raúl’s assumption of the Presidency. His central conclusion is that while the pricing, land redistribution and institutional reorganization reforms have been significant and positive, the reforms “lack a systemic focus” and require further deepening. (p.91)

In chapter six, Anicia García provides a fifty-five page analysis of agricultural production, food availability, and imports and exports of food and agricultural inputs. The sector has been severely damaged by its low policy priority over the last twenty five years, low prices in the state marketing system, minimal investment, a perverse exchange rate, and the strength of foreign competition – notably from the United States since the opening of agricultural exports to Cuba by that country. This is an impressively detailed and comprehensive analysis, clearly the best to appear so far. Following this is a fine chapter by Pérez Villanueva on direct foreign investment extracting insights from the experience of China and Vietnam for Cuba.

Mayra Espina Prieto and Viviana Togores González contribute a valuable chapter analyzing Cuba’s changing socio-economic structures since the beginning of the “Special Period” in 1990, characterized by greater economic and social differentiation among sectors, regions, social groups and individuals and some exacerbation of inequalities, all of which have been generated by enhanced social mobility for those riding high in emerging economic activities and sectors of the economy, notably the higher end “self-employment” activities such as tourist oriented restaurants and “bed and breakfasts.”  New circumstances require new policy approaches and the authors emphasize the importance of targeting social programs, of focusing at the household level, of enhanced and sustained financial support for social policy and of social program decentralization.

The last chapter, by Lucy Martín Posada and Lilia Núñes Moreno, examines the regional and housing dimensions of inequality in Cuba. Drawing on regional statistical information from the Oficina Nacional de Estadísticas, the work of other analysts, their own analyzes and a survey, they construct a clear portrait of regional, housing and economic inequalities. They also present a range of specific policy recommendations for reducing these inequalities.

All in all, this is a valuable analytical survey of some of the central issue areas in Cuba’s current reform process. However, economic policies in a range of vital issue areas remain to be analyzed in greater depth as part of the process of the actualización of the Cuban economy. One hopes that the next round of major publications on the Cuban economy will investigate some of these specific policy areas more profoundly than was possible in a general volume such as this. Of particular relevance would be analyses of the policies toward industry, energy, infrastructure, the service sector, small enterprise and the private sector, cooperatives, state enterprise, foreign investment and joint ventures, exchange rate and monetary issues, trade policy, policy towards foreign investment, social policies, health and education, labor issues, pensions, demographic issues, cultural areas, etc. The work ahead is daunting.