Time to hug a Cuban

A rush to embrace a fading outpost of communism 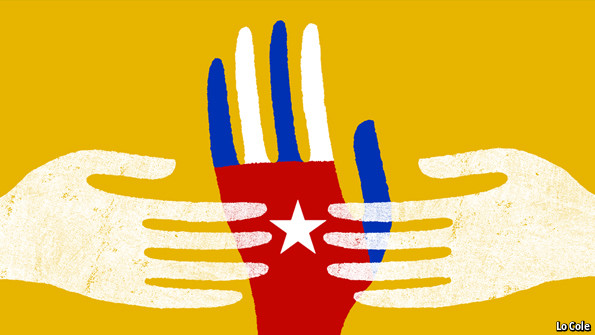 HOW best to speed change in Cuba? The past few weeks have brought three different answers to that question, from the United States, the European Union and Latin America.

For more than 50 years the official American answer has been to try to asphyxiate Cuban communism through an economic embargo, and to encourage internal dissent. It was policy as tantrum, a counterproductive failure. Change is coming to Cuba—but from the top, not below. Since replacing his elder brother, Fidel, as Cuba’s president in 2008, Raúl Castro has unleashed economic reforms which, while officially aimed at “updating socialism”, are in practice introducing elements of capitalism. Some 450,000 Cubans work in a budding private sector of farmers, co-operatives and small firms.

Across the Florida Straits, the changes are causing long-monolithic support for the embargo to crumble. A poll taken in the United States for the Atlantic Council, a think-tank, published on February 11th found that 56% of respondents favoured normalising relations with Cuba. Days earlier Alfonso “Alfy” Fanjul, the patriarch of a pre-revolutionary sugar dynasty and long a pillar of anti-Castro Miami, told the Washington Post that he had made two trips to his homeland, talked to Cuban officials and would invest in Cuba “under the right circumstances”.

Barack Obama, who briefly shook Raúl’s hand at Nelson Mandela’s funeral in December, has lifted some restrictions on travel and remittances to the island. Many observers expect him to take further steps in that direction and to revoke Cuba’s anachronistic designation as a state sponsor of terrorism—once November’s mid-term elections are out of the way. But only the United States Congress can fully dismantle the embargo.

On February 10th the European Union, whose members maintain economic ties with Cuba, announced that it wants to start talks on a “political dialogue and co-operation agreement”. In practice many of its members have already sloughed off a “common position” adopted in 1996, a kind of embargo-lite that predicated closer links on promoting a transition to democracy. The EU was at pains to stress that this was not really a policy change, but it is.

One thing the EU will keep doing is to complain about the lack of human rights in Cuba. Latin America has already stopped bothering. Last month Raúl hosted a gathering of the Confederation of Latin American and Caribbean States (CELAC), a body set up in 2011 explicitly to include Cuba and exclude the United States. In Havana the bloc’s leaders signed a declaration that stated that regional integration should “respect…the sovereign right of each of our peoples to choose its own form of political and economic organisation”.

Many Latin American leaders see being friendly to the Castros as a cost-free way of showing that they no longer take political direction from Washington, DC, let alone Miami. (A handful would like to go further and be like the Castros.) Yet their declaration was a cavalier disavowal of the democracy clauses inserted into many regional agreements over the past two decades. It smacked of double standards: so quick to condemn dictatorships of the right, today’s crop of centre-left leaders are happy to give the Castros a free pass.

Oddly this rush to hug a Cuban comes as reform shows signs of stalling. The pace of private-sector job creation has slowed. The government has shut down private cinemas; it has ejected several Western businessmen. A special economic zone at a new Brazilian-built port at Mariel has yet to attract foreign investors, because of the restrictions they still face. Many Cubans felt insulted when they were granted permission to buy new cars—at astronomical prices.

The aim of the reforms is to allow the private sector to create the wealth that the state can’t. But the Communist bureaucracy still resists the notion that this has to involve creating wealthy people. If Raúl were to die before the reforms have created a broad coalition of winners, there would be a risk of backsliding.

In fact, the key to speeding change in Cuba probably lies in Caracas. Thanks to an alliance forged by Fidel and Hugo Chávez, Venezuelan aid accounts for around 15% of Cuba’s GDP. Years of misrule have brought Venezuela to the verge of an economic implosion. It is the fear of losing Venezuelan petrodollars, as well as apprehension about the “biological factor” (as Cubans call the death of the elderly Castros), that drives the island’s halting process of change. For other powers the best way to help is through efforts that support Cuba’s budding capitalism without offering the Castros any political endorsement.

This entry was posted in Blog and tagged International Relations, Politics. Bookmark the permalink.

One Response to Time to hug a Cuban