Venezuela and Argentina: The party’s over; [ time for Cuba to partner with Brazil ! ] 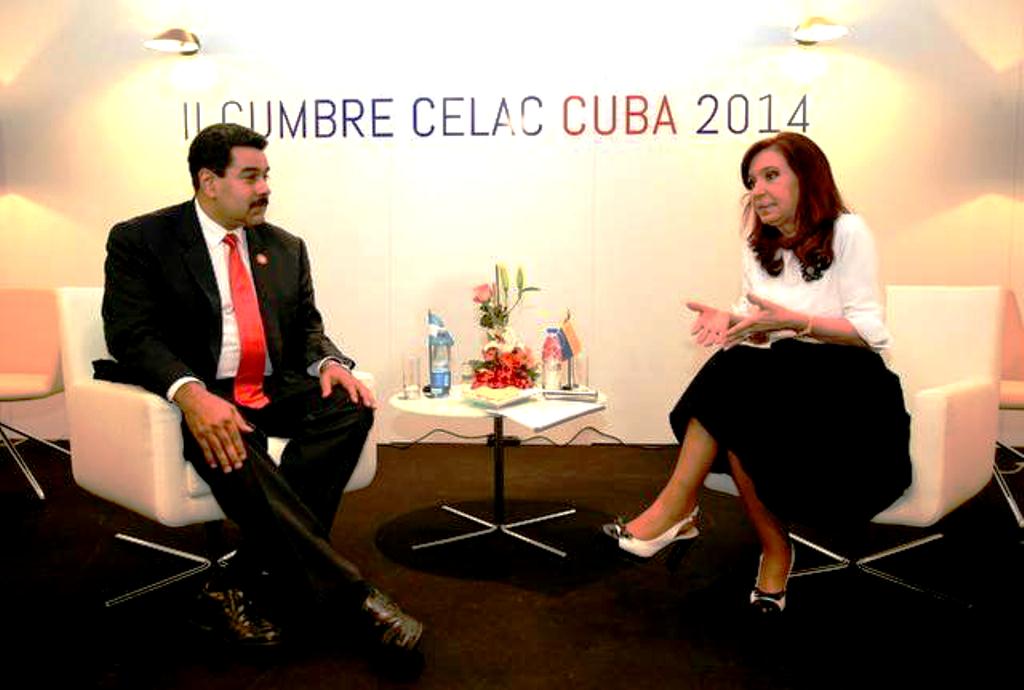 WHEN the euro crisis was at its height it became commonplace for struggling European economies to insist that they were not outliers like Greece. Whatever their woes, they declared, Greece’s were in a class of their own. In Latin America, by contrast, the unwanted title of outlier has two contenders: Argentina and Venezuela. Both have been living high on the hog for years, blithely dishing out the proceeds of an unrepeatable commodities boom (oil in Venezuela; soya in Argentina). Both have been using a mix of central-bank interventions and administrative controls to keep overvalued exchange rates from falling and inflation from rising. Both now face a come-uppance.

High inflation is a shared problem. Argentina’s rate, propelled higher by loose monetary and fiscal policies, is unofficially put at 28%. Argentina’s official exchange rate is overvalued as a result, fetching 70% more dollars per peso than the informal “blue” rate in mid-January. Venezuela’s prices are rising faster still. Last year, during an awkward political transition after the death of Hugo Chávez to the presidency of Nicolás Maduro (pictured with Cristina Fernández de Kirchner, the Argentine president), the Central Bank stepped up money-printing to finance public spending, pushing inflation to 56.2%. A dollar fetches 75-80 bolívares on the black market, up to seven times the official rate.

Both countries have dwindling arsenals with which to defend their overvalued currencies. Venezuela’s reserves of gold and foreign currency, which stood at nearly $30 billion at the end of 2012, were down to just over $21 billion by last week. Only about $2 billion of that is in liquid assets. Ecoanalítica, a research firm, estimates that the government can also dip into around $13 billion of opaque, off-budget funds. Argentina’s reserves have also been tumbling (see chart).

Something had to give, and late last month it did. Argentina first allowed the peso to plunge, by more than 15% in the week starting January 20th, and then announced a relaxation of the government’s ban on buying foreign currency for saving purposes. Argentines making over 7,200 pesos ($900) monthly are now able to change 20% of their salary into dollars at the official exchange rate so long as they get approval from AFIP, Argentina’s tax agency. The dollars are transferred to their bank accounts, not released in cash, and hit by a 20% fee if withdrawn before a year. If that sounds complicated, it is still cheaper than buying dollars in the illegal market.

The government’s objective seems to be to close the gap between the official and blue exchange rates, alleviating the need to spend more of those precious reserves to prop up the official rate. Although the gap has closed a little, fear that devaluation will lead only to yet higher inflation explains continued high demand for dollars, even at the less favourable exchange rate. So too does the fact that only a third of Argentine workers meet the declared-income threshold for buying dollars, according to analysis by IARAF, a think-tank.

Guido Sandleris of the University Torcuato di Tella says the plan is doomed to failure unless the government becomes more open about its intentions and adopts a genuinely restrictive set of policies to battle inflation. Although the Central Bank this week raised one of its interest rates by a full six percentage points, rates remain below inflation, giving Argentines little reason to hold pesos.

On the fiscal front the government needs to reduce subsidies and remain unyielding in the face of workers’ demands for pay rises. Miguel Kiguel of EconViews, a consultancy, says wage increases to be negotiated in March and April must remain under 30% if they are to serve as an anti-inflationary anchor. That will be hard given lavish pay awards handed out to striking policemen last year.

Whether the government is willing to put prudence before politics is not clear. On the day that her government let the peso’s slide turn into a slump, Ms Fernández announced a plan to fund education for unemployed 18- to 24-year-olds that could cost 11 billion pesos. Her only reference to the currency’s fall was a tweet accusing banks of helping favoured investors to speculate on the peso. There are some people, she wrote, who “want to make us eat soup again, but this time with a fork.” 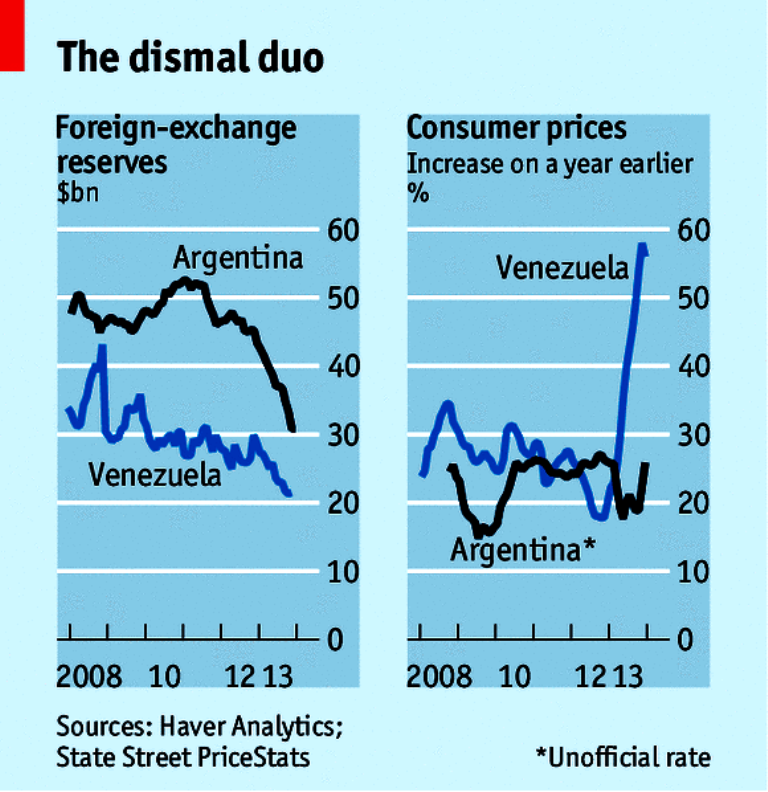 At least Argentina’s partial liberalisation of currency controls is a halting step towards normality. Venezuela, where the situation is even more perilous, is heading in the other direction. On January 22nd the government unveiled new rules under which a higher rate for non-essential transactions is set weekly (it stood at 11.36 bolívares to the dollar this week). The old rate of 6.3 still applies for government imports and basic items such as food and medicine, so reserves will keep falling as the government defends the currency.

Venezuela is running out of dollars to pay its bills. Although payments to its financial creditors of around $5 billion this year do not appear to be at risk, the country’s arrears on non-financial debt are put at over ten times that sum. These include more than $3 billion owed to foreign airlines for tickets sold in bolívares, and around $9 billion in private-sector imports that have not been paid for because of the dollar shortage. “Under the current economic model, and with this economic policy,” says Asdrúbal Oliveros of Ecoanalítica, “this [debt] looks unpayable.”

The effects are already apparent. Foreign airlines have placed tight restrictions on ticket sales; some have suspended them altogether. Many drugs and spare parts for medical equipment are unavailable. Car parts, including batteries, are increasingly hard to find; newspapers are closing for lack of paper. The country’s largest private firm, Empresas Polar, which makes many basic foodstuffs, is struggling to make some products. In a statement Polar said the government owed it $463m and that production was “at risk” because foreign suppliers of raw materials and packaging were threatening to halt shipments.

The government blames the crisis on private businesses and “irresponsible” use of hard currency by ordinary Venezuelans. It has ordered drastic cuts in dollar allowances for travellers, especially to popular destinations like Miami. Remittances to relatives abroad have also been slashed. In a bid to curb runaway inflation, it has introduced a new law restricting companies’ profits to 30% of costs. Long jail sentences await transgressors. Without a big injection of dollars from the state oil company, Petróleos de Venezuela, which brings in 96% of foreign earnings, the crunch will continue. Better terms for foreign investors in the oil industry would bring in much-needed cash and boost stagnant production. But unless the government abandons its antipathy to private capital, the prospect of new investment is dim. Shortages of goods are only likely to worsen. If Argentina is an outlier, Venezuela risks straying into a different category entirely. 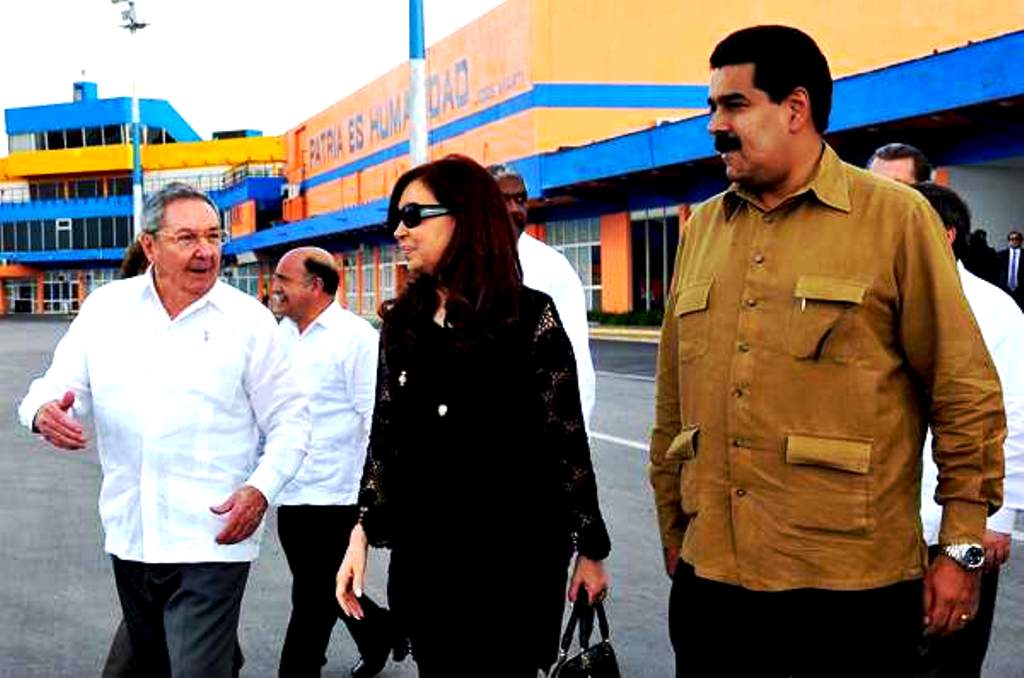 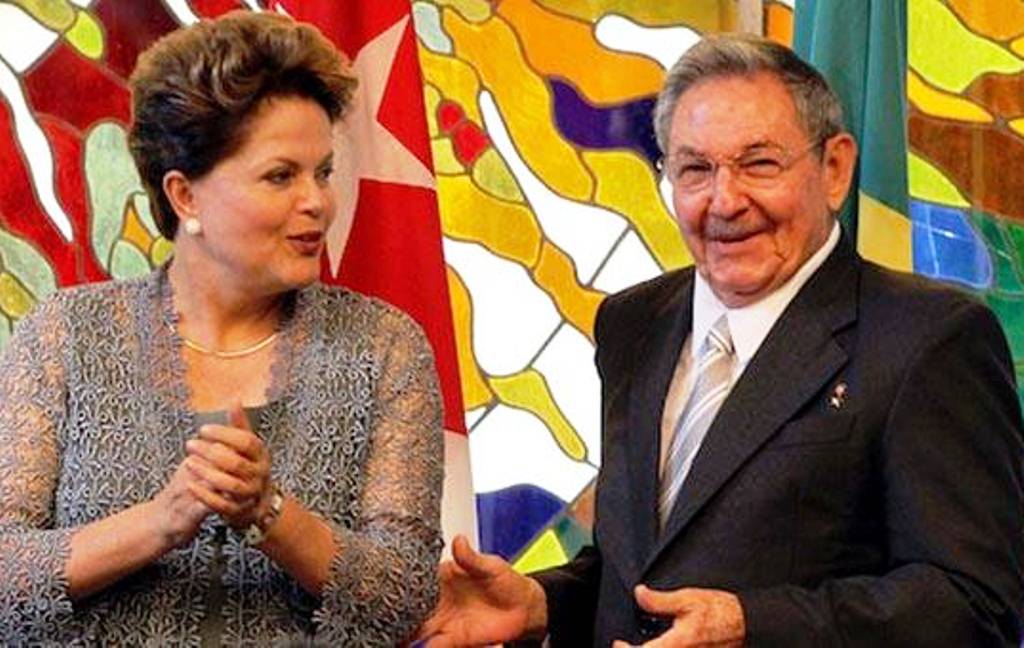