Cuban police carried out more than 150 detentions of dissidents Tuesday on International Human Rights Day and followed up Wednesday by carting off the founder of a group that was holding a rare human rights congress, according to activists in Havana.

Antonio Rodiles, founder of the group Estado de SATS, was taken away by police Wednesday around 11 a.m. as he watched a group of children write graffiti on the sidewalk in front of his home, activist Elizardo Sanchez Santa Cruz said.  Dissident blogger Regina Coyula, who was in Rodiles’ house participating in the First Congress for Human Rights, told reporters that Rodiles was detained when he intervened with police who were harassing his girlfriend for taking photos of the children.

Yohandry Fontana, a pro-government blogger widely believed to be a State Security official, tweeted Wednesday: “I confirm the detention of Antonio Rodiles for attacking and insulting children.”

Estado de SATS and two other independent groups sponsored the Congress, which started Tuesday on the anniversary of the U.N.’s Universal Declaration on Human Rights and was to end Wednesday night with a musical concert.

Sanchez Santa Cruz, head of the illegal but tolerated Cuban Commission for Human Rights and National Reconciliation, said he had information on more than 150 detentions on Tuesday and was still receiving new reports as of Wednesday evening. All but a handful had been released by Tuesday night after so-called “short-term arbitrary detentions for political motives,” usually designed to intimidate or harass dissidents and keep them from attending opposition gatherings. “That’s not counting the harassment and other acts of vandalism because there was a lot of violence by the forces of repression along the entire country,” Sanchez Santa Cruz said by phone from Havana.

Reports of more detentions were still arriving at his Havana office Wednesday because government security forces shut down the cellular and home phones of several hundred activists for much of Tuesday, he said.

The dissident group Ladies in White said its members alone suffered about 130 detentions as they tried to stage street protests — not tolerated by the government — in downtown Havana and the eastern city of Santiago de Cuba, the country’s second largest city. Others were detained as they tried to reach Rodiles’ home to participate in the two days of panel discussions, video programs and art shows, according to dissidents. Also detained were several members of the Cuban Patriotic Union, an opposition group most active in the eastern part of the island. UNPACU founder Jose Daniel Ferrer said more than 130 UNPACU and Ladies in White members were detained Tuesday in eastern Cuba alone amid a string of protest meetings, marches and distributions of anti-government leaflets and posters.

Several dissidents were injured when government-organized mobs and State Security agents threw rocks at them, Ferrer said. Mob members and police also made off with cameras, cell phones and cash taken from many of the opposition activists. 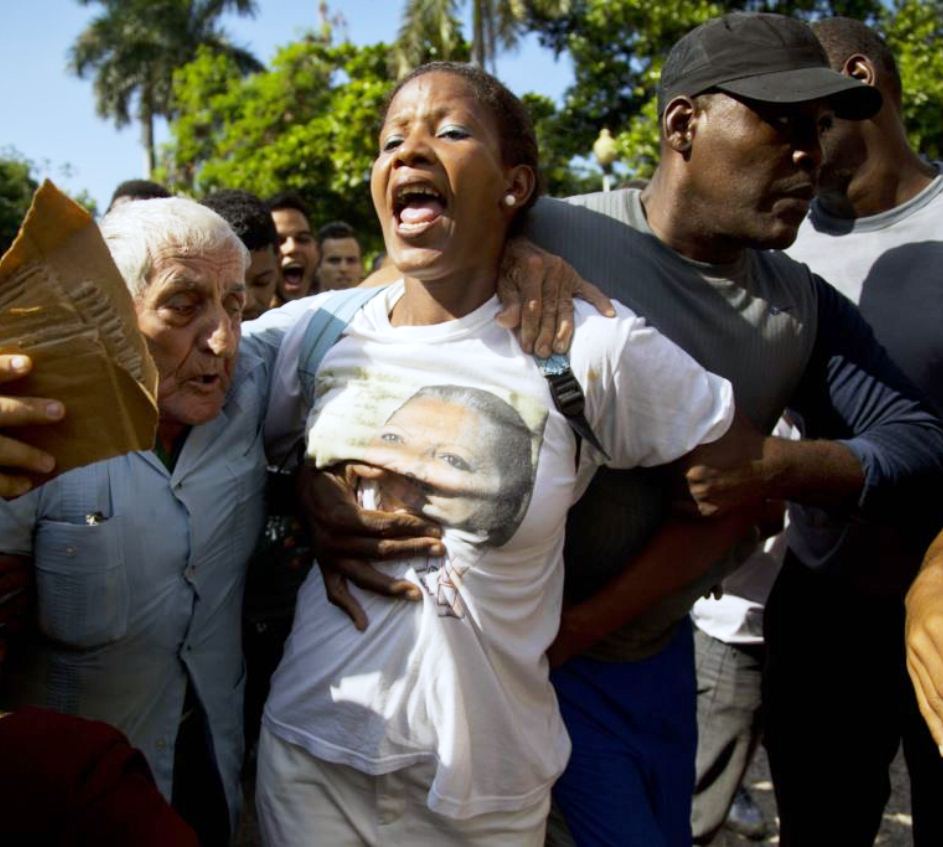 A member of Ladies in White is detained by Cuban security before the start of a march marking International Human Rights Day in Havana, Dec. 10, 2013.

This entry was posted in Blog and tagged Democracy, Freedom of Assembly, Freedom of Expression, Human Rights. Bookmark the permalink.