The Mariel Export Processing Zone (EPZ) is the second attempt since May 1997[i] to set up an EPZ that will promote foreign investment and thereby generate jobs, income, domestic value added and foreign exchange earnings for Cuba. This new container port facility and industrial park will free Havana Harbor for restoration and regeneration ultimately for recreational rather than industrial purposes. One might expect that Brazilian and Chinese enterprises – private and state-owned- will seize the opportunity to operate in Mariel vigorously with an eye for exports or re-exports to the Caribbean region.

These provisions should provide a strong incentive for foreign firms to locate in the EPZ. On the other hand, this tax regime in itself will not generate a huge amount of foreign exchange revenues for the Cuban Government.

The down-side of the tax regime for foreign investors and the major earner of foreign exchange for the government will be the hidden taxation involved in the hiring of labor. EPZ enterprises, like those in joint enterprises will have to pay hard currency to a state company to cover the wages and salaries of Cuban workers at a rate around $US 1.00 = 1 peso (CuP in Moneda Nacional) while the rate that is relevant for Cuban citizens is $US 1.00 = 26 pesos (CuP). The government can then sell the hard currency (“convertible pesos” or CuCs) at the rate of 1CuC = 26 CuP, meaning a profit on each CuC of 25 CuPs. This profit to the government is in effect a 96% tax rate (1 – 25/26 = 0.038) .  This counterbalances to some extent the generosity of the rest of the tax regime for the EPZ firms.

In the words of Marc Frank:

“However, one of the main complaints of foreign investors in Cuba has not changed: that they must hire and fire through a state-run labor company which pays employees in near worthless pesos while investors pay the company in hard currency. Investors complain they have little control over their labor force and must find ways to stimulate their workers, who often receive the equivalent of around $20 a month for services that the labor company charges up to twenty times more for.” Frank, Reuters, September 23, 2013

EPZ enterprises also would prefer to operate with a reasonable and realistic exchange rate and the power to hire labor directly rather than to go through the state labor company.

The accompanying table compares the tax regimes for micro-enterprise, foreign firms in joint enterprises and EPZ enterprises. While the reforms of the micro-enterprise tax regime in 2010-2011 reduced the discrimination favoring foreign enterprises, but did so only slightly. For foreign firms the tax base is total revenues minus all costs of production and investment. In contrast, for micro-enterprises the tax base is total revenue minus arbitrary and limited maximum allowable levels of input costs ranging from 10 to 40 percent depending on the activity, and regardless of true production costs. As a result, for Cuban micro-enterprises the effective tax rate can be very high and could exceed 100% while the effective tax rate for foreign enterprises is exceedingly low. Moreover, investment costs are deductible from future income streams for foreign firms, this being the normal international convention. But for Cuban micro-enterprise, investment costs are deductible only within the 10 to 40% allowable cost deduction levels for the current year.

The highest tax rate or bracket for domestic micro-enterprises is 50% while that for foreign firms in joint-enterprises is 30% generally but 50 % for mining (namely for Sherritt International). The Mariel EPZ rate is 0.0% for 10 years and 12% thereafter.

The EPZ firms can import equipment and materials at 0.0% import duty. For many imported inputs required for micro-enterprises, the sales tax they pay in the “convertible currency” stores is 140%, though wholesale markets are to appear before long providing imported inputs at prices that may be a good deal lower.

All in all, the differential tax regimes represent a surprising type of discrimination against Cuban citizens and in favor of the foreign firms in joint enterprises or the Mariel EPZ. The tax system permits very low taxes for the foreign owners of enterprises investing in the EPZ. IN contrast, Cuban micro-enterprises face a daunting tax regime.

From the perspective of Cuba’s national interest, the tax regime has another weakness. This is the heavy but hidden taxation on the payment of labor in the EPZ. The effective 96% tax operating through the dual exchange rate system does generate revenue for the Government. However, by making labor relatively expensive for the EPZ firms, it will provide a disincentive to job creation in the EPZs. This is a central objective of Cuban economic policy at this time as it tries to absorb up to 1 million workers that it considers to be redundant in the state sector of the economy.

Moreover, while the wage compensation to Cuban workers is pitifully low under the dual exchange rate system, the cost to employers is high. Under the wage payment systems of the previous EPZs, illustrated in the Table 2 below, the wage costs to employers were well above neighboring countries in the Caribbean region. This may well persist under the tax arrangements for the new Mariel EPZ.

[i]Three EPZs were established in 1997 at Mariel, Berroa, some ten kilometers from the port of Havana  and Wajay by the airport outside Havana. Their performance was mediocre; hence the new approach for a “Super-EPZ” at new container port at Mariel. 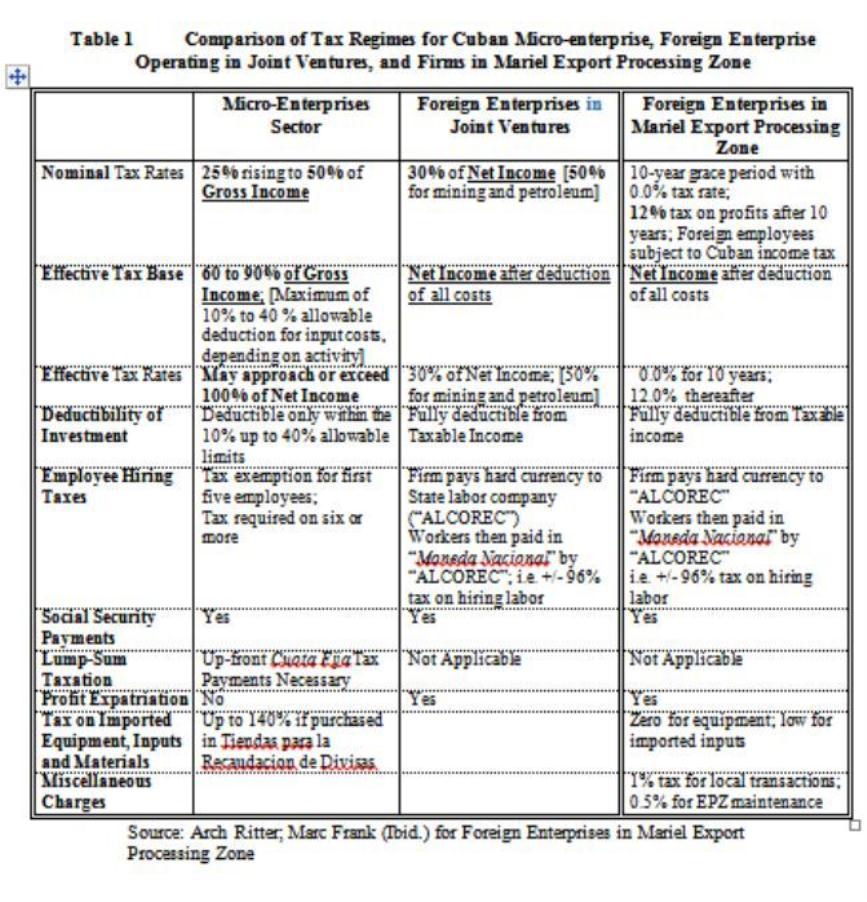 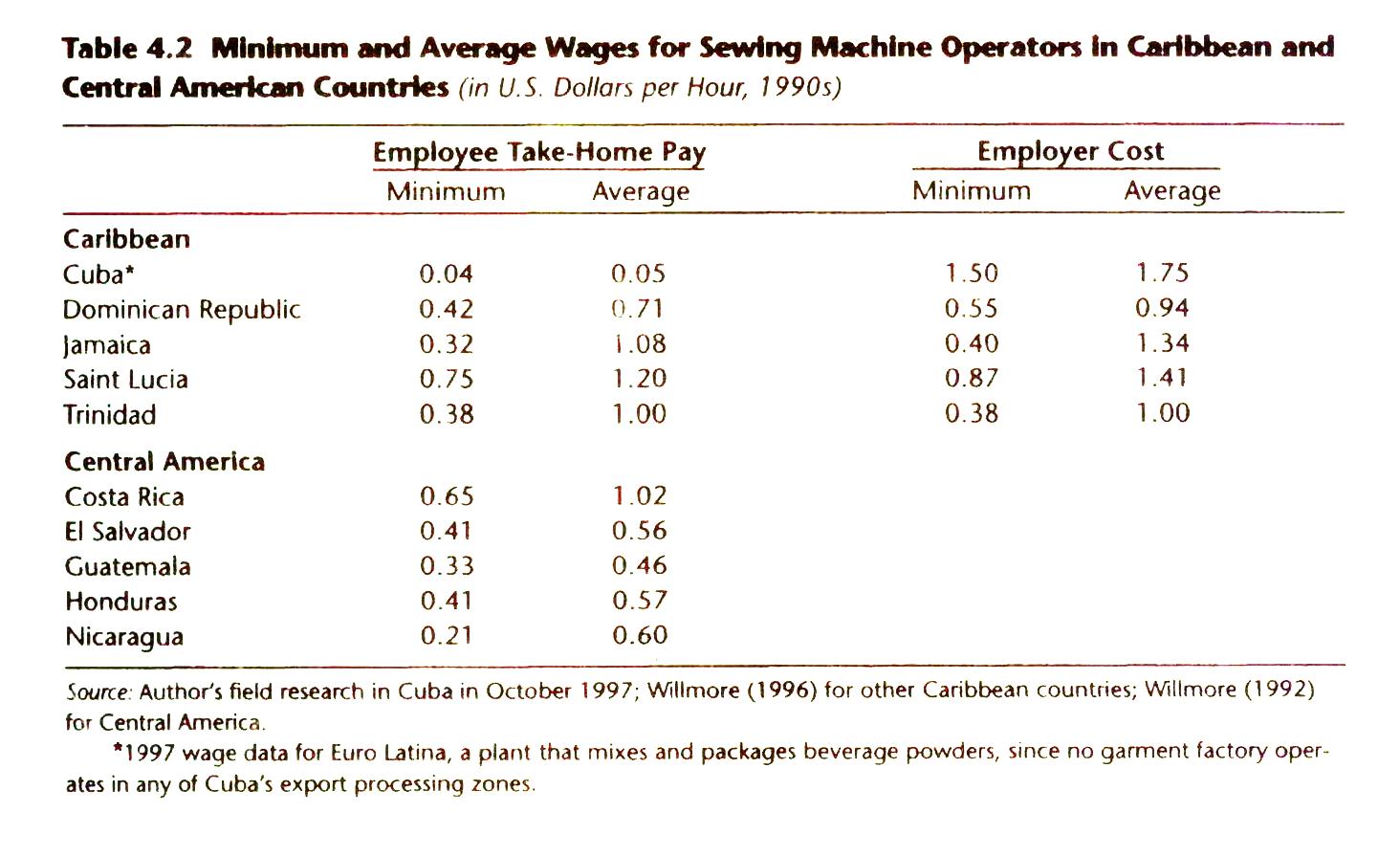 4 Responses to The Tax Regimen for the Mariel Export Processing Zone: More Tax Discrimination against Cuban Micro-enterprises and Citizens?