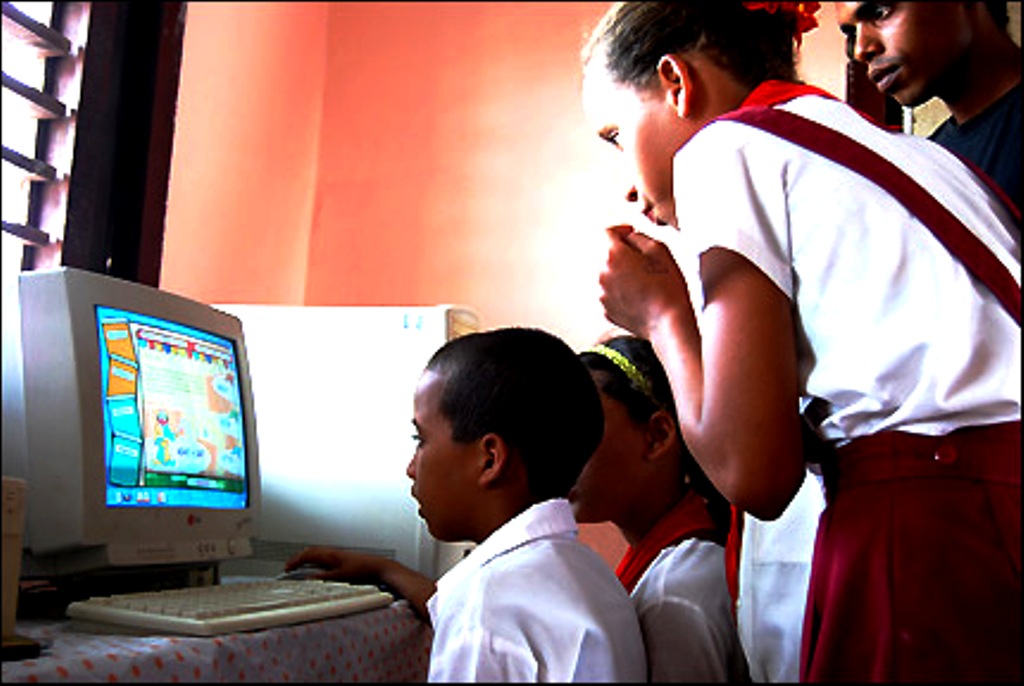 HAVANA, Jan 5 2013 (IPS) – The Cuban government’s economic reforms must consider the myriad opportunities offered by the Internet, a key platform of the dominant economic model on the planet, according to interviews with both experts and average people.

“It is not an option for our future development, it’s an imperative of our time,” economist Ricardo Torres told IPS. “Without the mass application of the New Information and Communications Technologies (NICT), to production processes and social life, there are no contemporary possibilities of development.”

Meanwhile, people who participated in the interactive section of Cafe 108, the website of the IPS office in Cuba, felt that mass access to the worldwide web would mean first of all, “Finally landing in the 21st century”, and more job opportunities together with the expansion of state enterprises and small private businesses.

However, the NICT and especially the Internet issue, is a complicated one in Cuba due to financial and political concerns, particularly because of the more than 50-year old conflict between Havana and Washington.

The global expansion of the Internet in the 1990s happened as Cuba entered the economic crisis that continues today, which followed the fall of the Soviet Union and the European socialist bloc, Havana’s main trading partners.

According to Torres, Cuba’s “unique socioeconomic and geopolitical situation” meant that “not enough resources have been earmarked for the development and use of these technologies”. The United States’ covert delivery of mobile phones, computers and Internet connections has been regarded by Cuba as meddling in its internal affairs.

In 2011, a fiberoptic submarine cable arrived at the Cuban coastline, thanks to a project between Havana and Caracas to grant greater independence in communication between the Caribbean and Central America. In May 2012, the Venezuelan Minister of Science, Technology and Innovation, Jorge Arreaza, told reporters that the cable was operational.

Cuban authorities remain absolutely silent about the cable, though there has been a noticeable improvement in local connectivity.

Cuba now has a minimum bandwidth of 323 megabits per second, the allowable capacity via satellite. According to official sources, the fiber optic cable will increase current transmission speeds by 3,000 times, and decrease operating costs by 25 percent, but satellite services will not cease.

The Ministry of Information and Communications has said it will boost the so-called social use of NICTs, but not its commercial application. Appearing before Parliament this month, the head of the ministry, Maimir Bureau, said the government prioritises access to Internet sites in places linked to social and community development, such as schools.

He also reported that projects are underway to reduce the costs of mobile phones. Today, few people have Internet connections or email at home; most use “dial up” (technology that allows access through an analog phone line) or wireless. Some shell out the high prices charged at Cyber Cafes, and especially at hotels.

Meanwhile, private sector job opportunities, opened up by an updated Cuban economic model, could further expand with an affordable Internet service for entrepreneurs and cooperatives.

Unable to take advantage of all the possibilities offered by the current Web, some independent initiatives are timidly exploring the promotion of services via email, in websites, social networks like Facebook or Twitter or messages to mobile phones. Among them is the Alamesa project for the “diffusion of Cuban gastronomy”.

The group, which also manages associated food services through the World Wide Web, has as its main tools a web directory on national restaurants and an electronic newsletter. The Chaplin’s Café restaurant in Havana and handcrafted lamps company LampArte have profiles on Facebook.

La Casa restaurant is on Facebook, Twitter, WordPress, Flickr and YouTube, and regularly interacts with users of the international travel site TripAdvisor. MallHabana, the exclusive shop of online remittances to Cuba is also online. These initiatives especially seek to attract international visitors.

Faced with national difficulties, many family businesses seek alternatives to offer their goods and services online. The exclusive leather handbag company Zulu, owned by Cuban Hilda M. Zulueta, has its own site, managed by one of the daughters of the artisan who lives in Spain, the owner told IPS.

In 2011, only 1.3 million of the 11.2 million inhabitants of the island had cell phone connections, according to the National Office of Statistics and Information. It also recorded 2.6 million online users, a figure that includes Internet accounts and Cuban intranet, which provides access to some international and local websites.

Before thinking about divulging his musical production, the well-known soundman Maykel Bárzaga dreams of having his own connection to easily update and activate the essential software for his home studio recordings. Five years ago, he took this option for associated creators of the non-governmental Union of Writers and Artists of Cuba.

“When you buy equipment or a programme for music editing, you must activate it and update it by placing a key on the provider’s page,” he told IPS.

He also pointed out that the “Internet is a stunning source of work, since it allows musicians to perform international projects without each of them leaving their country.” The Boston Consulting Group (BCG) estimated in 2012 that the Internet economy will grow in the coming years to more than 16 percent annually in the developing markets of the world.

Expanding channels for retail is one of the many economic opportunities that would come with unrestricted access to the Internet, which was identified by participants of Café 108.

In their view, among other things, many people could make a living with new professions, Cuba could export services through the web, the tourism industry would have more independence to fully own sites and be better positioned, and companies and cooperatives with professionals from the whole country and the world could emerge.

This entry was posted in Blog and tagged Communications, Internet. Bookmark the permalink.