Haiti’s President Michel Martelly recently visited Cuba to sign cooperation agreements including in health. No doubt Haiti needs help to deliver needed healthcare, but these accords exploit Cuban workers and contribute to the continued oppression and impoverishment of the Cuban people. 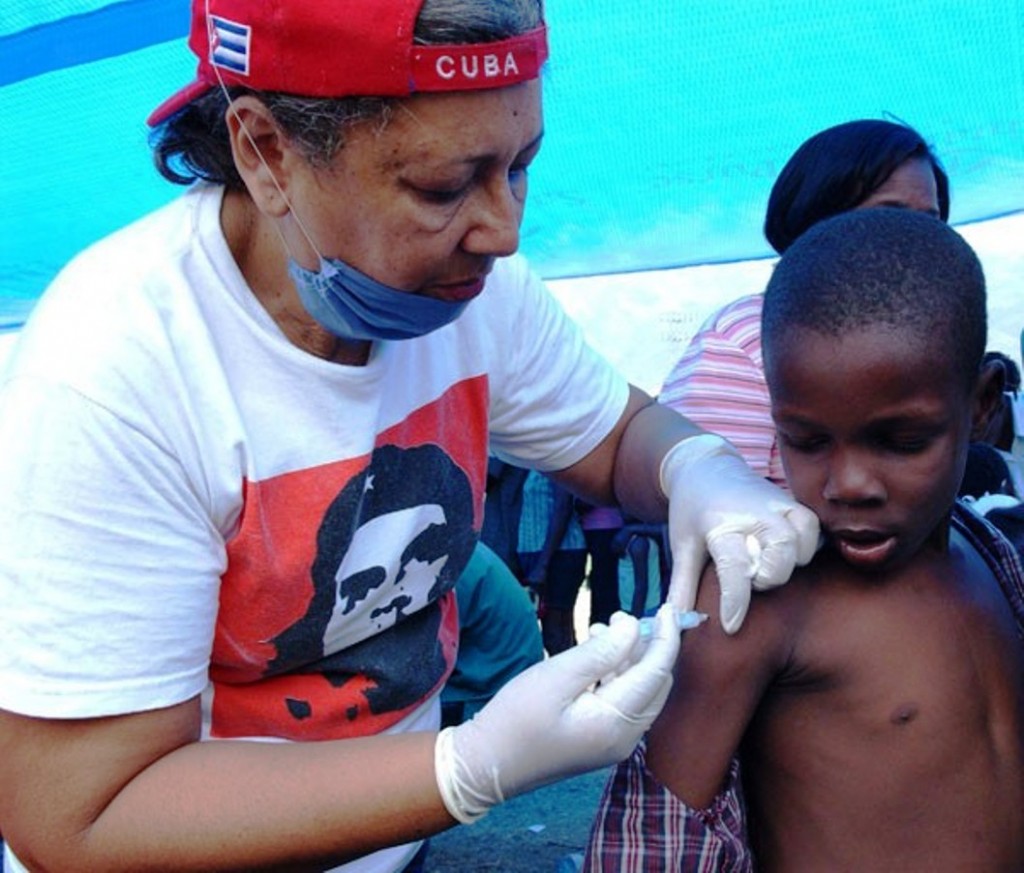 Currently, around 700 Cuban health professionals are in Haiti. Cuba has similar government-to-government agreements with over 70 countries. These partnerships allow the Castro dictatorship to reap huge financial gains, avoid needed reform, and increase international influence to advance its agendas. Meanwhile, the export of scarce medical resources is causing a severe public health crisis in Cuba. Doctors and basic medical supplies are hard to find and facilities are falling apart.

When the earthquake struck, 344 Cuban health professionals were working throughout Haiti; more were immediately sent and deployed to the most remote areas. Cuba had long been receiving millions from international organizations and countries such as France and Japan for these services. Great need and corresponding international largesse became a golden opportunity. Just weeks after the disaster, Cuba was promoting a gigantic endeavor to build a new healthcare infrastructure for Haiti at an annual cost of $170 million, to be paid for by international donors. Cubans and Cuban-trained medical staff would run it at “half the international prices.”

Countless millions are now pouring into Cuba from the Pan American and World Health Organizations, dozens of NGOs, foundations, companies, and individuals from the United States, Canada, Spain, Belgium and others. Many governments have also donated — Venezuela $20 million to start, Brazil $80 million, Norway $2.5 million. The list of donations is undisclosed, but France, Australia, Japan, and other countries have apparently chipped in. The cost to Haiti is just a $300 monthly stipend to each Cuban health worker plus transportation and housing.

Haiti is just one very profitable subsidiary in Cuba’s global multi-billion dollar ¨humanitarian¨ enterprise. Most of its profits come off the backs of Cubans indentured as “collaborators.” Angola, for example, reportedly pays Cuba $60,000 annually per doctor; the doctor receives $2,940 (4.9 percent), at most. These service exports bring more than three times the earnings from tourism and far more than any other industry — $7.5 billion in 2010, the last year reported. Business is so good that in 2010 the Cuban government reduced an already decimated local health staff by 14 percent to send more abroad.

This unique brand of health diplomacy is only possible in a totalitarian state guaranteeing a steady pool of “exportable commodities.” Leaving Cuba without government authorization is punishable with years of prison; health professionals face the strictest travel restrictions. If they defect while abroad, their family, which must stay behind, cannot joint them for five years; issuing them academic or other records is forbidden.

The average monthly pay of a doctor in Cuba is around $25, barely guaranteeing survival. Abroad, they live off a bare-bones stipend from the host government. But, they receive from Cuba their usual peso salary and a bonus of $180-220 per month, plus are allowed to send home shipments of consumer goods. This paltry compensation package is enough for Cuban doctors to “volunteer” to be exploited abroad rather than at home.

The health workers are sent abroad for at least two years and often to far-flung areas under rudimentary, sometimes dangerous, conditions. In Venezuela, dozens have been killed or raped. Heavy workloads, surveillance, and many arbitrary restrictions add to their hardship.

In this clever scheme of modern slavery, Cuba is partnering with dozens of governments — including longstanding democracies such as Portugal and Uruguay — and receiving funds from reputable countries and international organizations. Ostensibly, the agreements violate the domestic legislation of many host countries and international accords including the Trafficking in Persons Protocol, several International Labor Organization conventions, and standards concerning the prohibition of “servitude” and “slavery.”

The Martelly agreements with Cuba should be made public. If they violate human rights’ standards, Haiti should manage the international aid independently to hire and compensate Cuban workers directly and invite their families to join them. Other countries should take note.