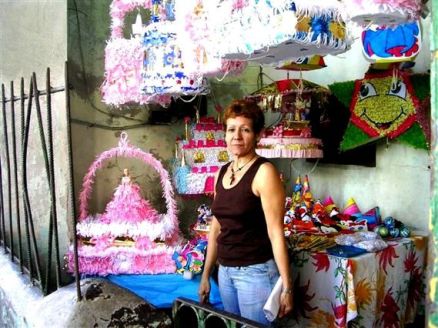 In the last year, the Cuban government has expanded the number of areas in which it allows entrepreneurs to launch small retail businesses. More than 350,000 Cubans are now licensed to have their own businesses, according to media reports. The streets are lined with Cubans providing locksmith services; fixing watches; selling pizza, hardware or clothing; and offering other services and commodities. Read a story about daily life in Cuba.

Felix is one of them. Opposite Havana’s Capitolio building, which looks remarkably like the U.S. Capitol, he operates his shoeshine and repair business with an old metal chair for his customers to sit on and a wooden crate as his own workbench. Sometimes, he shines shoes for tourists. Most often, he’s repairing the scuffed and scarred footwear of Cubans. Felix gets about 50 cents for a pair of high boots. White shoes cost $1.

Carlos, another small businessman, is a barbero . His barber’s chair is on the sidewalk in front of his mother’s apartment. He cuts hair with an electric clipper and comb for 75 cents.

Neither Felix nor Carlos is getting rich, not even slowly. It costs money to be in business. The government, which has owned all property in the country since Fidel Castro took power in 1959, collects rent for workspace. Business owners also pay monthly income and social security taxes.

For the thousands of “cuentapropiatas,” the self-employed, being in business for themselves is a huge change from being a ward of the welfare state that is the Cuban economy. Most Cubans work for the government, in jobs ranging from the menial to the clerical and semiprofessional. Housing, medical care, food rations and education are provided free by the government. The average Cuban’s monthly income is about $20. Doctors are the highest-paid, earning perhaps $350 a month.

Entrepreneurs have to weigh their chances of doing better than a government paycheck. There is an incentive to tap into the vibrant tourist economy, which brought 2.5 million people to the island last year. Tourists spend “Cuban convertible pesos,” which can be used in government-owned retail stores that actually have inventory for sale. They also give tips, making jobs as taxi drivers and hotel waiters among the best on the island. But the lure of “provided free by the state” is anathema to ambition. See photos of daily life in Cuba.

The costs and risks of being his own boss are not too high for Edwaldo, who, with a friend, has gone into the hardware business. It has been slow the first few months, he says. “But I think it will get better.” His store is on the front stoop of his apartment building. The hallway is the store’s space. Unlike many other hardware stores, his display is not on a windowsill of an apartment encased by security bars.

His venture is more iffy than many other entrepreneurs’, whether they’re selling sandwiches, pizzas or white plastic bags outside farmers’ markets. That’s because the hardware guys need stock to sell. They trade in items like Chinese-made TV remote controls, faucets, saw blades and paint brushes that, in the states, they could buy from manufacturers or distributors. Except there is no private wholesale or distribution system in Cuba. So they get items from friends or family who may bring them from the U.S.

They also trade with other merchants and even recycle what they may find in the debris of crumbling buildings or sites where buildings are being renovated. There is no Home Depot. Building materials must be shipped in, most likely from Spain or Mexico, according to the island’s official historian, who oversees rehabilitations.

Running a business is also difficult because of a lack of marketing tools. If a merchant wants a sign over his store space, the government will charge a monthly fee. While there are two Cuban television stations, they don’t carry advertising. There are no billboards, and only recently has the telephone company, Etecsa, accepted Yellow Pages–type advertising for a new directory, according to Granma, the Communist Party’s newspaper. The cost is $10, the paper said. Each listing will include a company’s name, address and phone number.

President Raul Castro, five years his brother’s junior, has set a goal of moving 1 million state workers off the government payroll. That would reduce the burden for the state while at the same time increasing income from their rents and taxes. Think of it as a strategy to reduce costs and increase income, at the expense of contradicting 53 years of history on this Caribbean island.

Archibald Ritter, an economist at the Norman Paterson School of International Affairs at Carleton University in Ottawa, says the government’s liberalized stance toward self-employment “is steadily, inexorably and permanently reversing Fidel’s economic heritage — though not his political institutions.” A major part of Fidel Castro’s life “is being canceled,” he says.

The Associated Press has watched a dozen of these start-ups in Cuba over the last year. A third have already failed. One wonders what will be the social cost of Raul Castro’s new socialism if the seemingly genetic optimism of these Cubans is blunted by the realities of a society with little consumer disposable income. Could Castro be sowing the seeds of a troubled harvest?