SÃO PAULO, Brazil—President Dilma Rousseff offered closer economic cooperation to Cuba during a visit to the communist island on Tuesday, marking Brazil’s highest-profile bid to transform its growing economic might into diplomatic leadership in Latin America.

Brazil’s state development bank is financing a $680 million rehabilitation of Cuba’s port at Mariel. Work on the port is being managed by the Brazilian construction firm Odebrecht SA, which may also provide support for Cuba’s sugar industry, Brazilian officials have said. 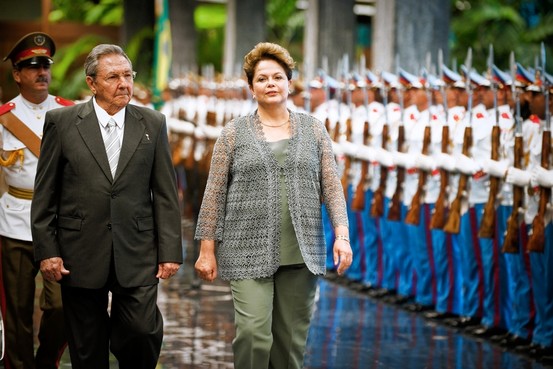 Ms. Rousseff’s closer engagement of Cuba—she is visiting the island before a trip to the White House— is the latest example of Brazil’s strategy to expand its regional influence by offering subsidized loans to poorer nations. In recent years, Brazil has disbursed tens of billions of dollars around Latin America, and as far away as Africa.

But none of these efforts have the same symbolic resonance as in Cuba, which has opposed the U.S. since shortly after Fidel Castro’s 1959 revolution and remains a lightning rod in U.S. domestic politics and a sticking point for U.S. relations with other Latin nations.

“This is about growing Brazil’s soft power on the international scale and raising Brazil’s role in the world,” said Matthew Taylor, a Brazil specialist at the American University’s School of International Service. “Brazil is taking on a bigger role in the hemisphere in terms of aid and finance, and by helping out Cuba they really draw attention to this new role they are playing.”

Although the U.S. has been the predominant power broker in Latin America since the introduction of the Monroe Doctrine in 1823, experts say the U.S. doesn’t oppose Brazil’s bid for regional influence. Many analysts say they believe Brazil could become a stabilizing force in a region known for political and economic volatility.

In Cuba, for example, Brazil may provide a more moderate alternative to the impoverished island’s main economic benefactor, Venezuelan President Hugo Chávez. Mr. Chávez, a self-described foe of the U.S., delivers some 100,000 barrels of oil and refined products to Cuba a day in exchange for the services of Cuban doctors for Venezuelans in poor neighborhoods, along with other barter arrangements.

Cuba, meanwhile, is desperate for economic lifelines. Raúl Castro, who has taken over the presidency from his ailing brother Fidel, has experimented with limited economic overhauls in order to bring life into a moribund economy, where citizens are still issued ration books that allow them access to some basic foods at subsidized prices.

“The more normal Cuba’s economic relations are, the easier normalization with the U.S. will be in the future,” said Archibald Ritter, an expert on the Cuban economy at Canada’s Carleton University.

“I would imagine that the U.S. would privately hope that Brazil will play a mediating role in issues that concern us, like human rights,” said Cynthia Arnson, the director of the Latin American program at Washington’s Woodrow Wilson International Center for Scholars.

Still, during Tuesday’s visit, Ms. Rousseff criticized the existence of the U.S. base at Guantanamo Bay, where terror suspects are held, and the U.S. trade embargo, which she said contributes to poverty on the island.

And it is unclear how far Ms. Rousseff might go to nudge Cuba toward a more democratic society. She declined requests for meetings by Cuban dissidents, and has said she won’t press the Castro brothers on the island’s human-rights record.

“Human rights aren’t a stone to be thrown from one side to another,” she said in Havana on Tuesday. This week, Brazilian Foreign Minister Antonio Patriota said human rights aren’t an “emergency” issue in Cuba. Last month, Cuban political prisoner Wilmar Villar died in jail after a 50-day hunger strike. Activists said he was protesting being jailed for taking part in a political demonstration. The Cuban government has said Mr. Villar was a common prisoner and wasn’t on a hunger strike when he died of complications from pneumonia.

As a young woman, Ms. Rousseff participated in a Marxist guerrilla group in Brazil that was inspired by the Cuban revolution. But the fact that she was jailed and tortured by Brazil’s military dictatorship had raised hopes that she might be more sympathetic to the plight of political prisoners than her predecessor, Luiz Inácio Lula da Silva, who over the years disparaged Cuban hunger strikers.

Observers said the case of Yoani Sánchez, a Cuban blogger who criticizes the Castro regime, may offer clues to changes in Brazilian human-rights policy. Brazil granted Ms. Sánchez a visa, and observers said if Cuba allows her to visit, then Ms. Rousseff may be using engagement to yield some human-rights advances.

In a blog post on Tuesday, Ms. Sánchez said she hoped Ms. Rousseff would meet with human-rights activists in Cuba and in so doing keep faith with “the many voices of democracy rather than opt for a complicit silence before a dictatorship.”

For generations, Brazilian leaders have yearned for prominence in foreign affairs commensurate with its population of 190 million and sprawling geography. The country has lobbied, unsuccessfully, for decades for a seat on the United Nations Security Council.

Such aspirations were the butt of jokes during generations of economic and political turmoil. That started to change a nearly a decade ago, when Brazil began an economic expansion that lifted millions out of poverty and transformed the resource-rich nation into what some economists estimate is the world’s sixth-largest economy—a notch ahead of the U.K.