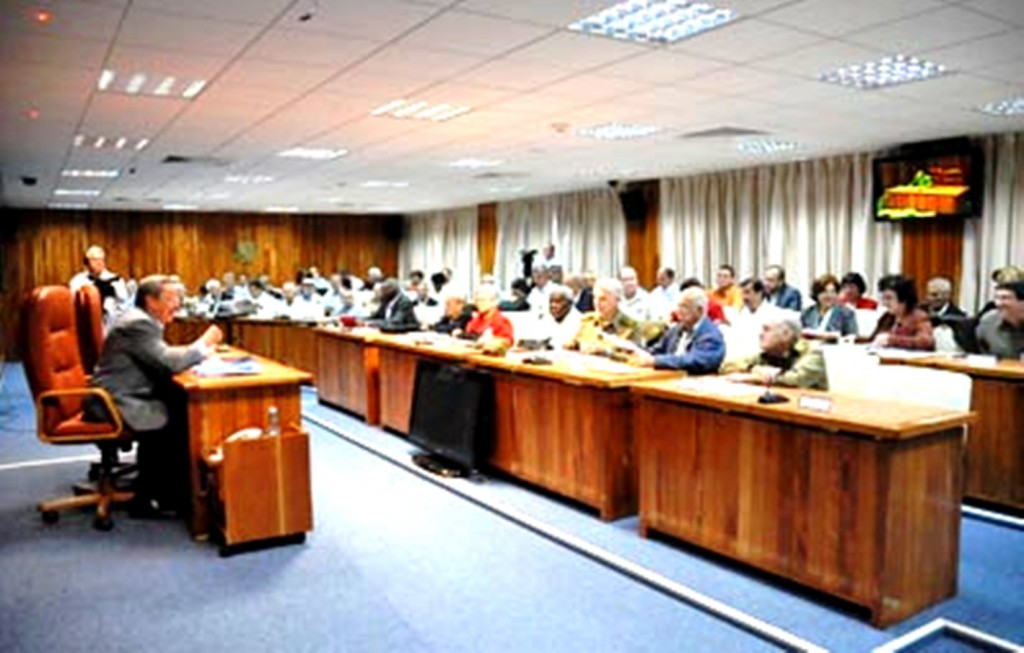 Raul Castro and the Council of Ministers, Granma, March 1, 2011

By Arch Ritter I had been looking in vain for any concrete information on public sector redundancies and the granting of self-employment licenses since December 2010.  After some searching in the Cuban press, the foreign press and various blogs, I came up empty handed. I was starting to think that the program had been aborted. Then yesterday, Raul announced in a publicized meeting of the Council of Ministers a major slow-down of the program, noting, in the words of the journalists, that “the up-dating of our model is not the work of a day or even a year but because of its complexity, it will require not less than a five year period to unfold its implementation” (Granma, 1 de Marzo de 2011) As far as I can determine, there have in fact been virtually no lay-offs yet in the public sector, although the original March 31 target for 500,000 fired workers is close at hand. Or at least, none have been clearly reported. The latest numbers for license-granting for the end of December 2010 indicated that some 75,000 new licenses had been issued with another 8,340 still in process – a slow start towards the March 1 target date. Granma, 7 de enero de 2011 The slow-down and delay in implementation is understandable.  Although the original proposal was in the right direction, it was seriously flawed and excessively hurried. The most obvious weakness of the strategy was that it called for lay-offs first, followed by or concurrently with job creation in the micro-enterprise sector which was only slightly liberalized in October 2010. As various critics quickly observed, this was placing the “cart before the horse”. The original time frame for the lay-off process – from July 20, 2010 to March 31, 2011 – became even more condensed as months of inactivity followed months. If implemented, this approach would have amounted to a draconian type of shock therapy. The process of firing workers is not easy under any circumstances. Though the Government stressed repeatedly that those made redundant would be supported by the state, the prospects of being laid off and having to establish one’s own micro-enterprise in a policy environment that is still difficult if not hostile must be unnerving for many people. It was to be implemented during the Cuban recession – (though Cuba is now appears to be in a process of recovery, due to higher nickel prices, increased tourism including US tourism, higher remittances.) Moreover, workers have no independent Unions to defend their rights during such a process of redundancies. (It was the Central de Trabajadores de Cuba that announced the lay-off strategy.) There was a potential for irregularities and perversions in the firing process as well, with redundancy being determined by factors such as Party faithfulness, personality issues,  or friendship with the relevant officials, rather than labor effectiveness, which is usually difficult to determine in any case. Moreover, the strategy, which was to be a defining component of economic reform and structural change, was adopted before the public discussions around the “Proyecto de Lineamientos de la Política Económica y Social del Partido y la Revolución,” There had been no public input or discussion in the media or public forums before this strategywas sprung on the Cuban people. Furthermore, it was clear from the start that the liberalization of self-employment was insufficient for the necessary level of job creation. (See Perez and Vidal, Ritter and Mesa-Lago for example.) There are some measures that are supportive of micro-enterprise expansion. These include a small increase in the permitted range of activities, minor relaxation of regulations and a small modification of the tax regime. More significant and positive are the liberalization of licensing and the “de-stigmatization” of the self-employed by the media and politicians. However, a variety of policies continues to constrain the activities of micro-enterprises and will prevent it from expanding as envisioned by the Government: –        Exceedingly onerous taxation continues. –        The tax on hiring workers will discourage job creation. –        A narrow definition of legal activities will limit enterprise and job creation. –        Exclusion of virtually all high-tech and professional activities blocks development of knowledge-intensive enterprises and wastes the training of the highly educated. –        Bizarre restrictions remain (such as a 20 chair limit on restaurant chairs). –        Restrictions and prohibitions on hiring workers remain. –        Taxes and regulations result in the stunting of enterprises which prolong inefficiencies and promote the underground economy. –        Unreasonable restrictions and heavy taxes breed contempt and non-compliance for the law. Under these circumstances, the necessary expansion of Small Enterprise will be slow and in fact probably would not occur. In this case, the Government will have two basic choices: either it can abort the structural change process or it can further liberalize the micro-enterprise sector in order to permit it to generate jobs for redundant state workers. In order to establish an “enabling environment” for micro-enterprise, here are some of the types of policy modification that would be necessary: