A complete English translation of the “Lineamientos” has just been published by Walter Lippmann, the Editor-in-Chief of CubaNews , the free Yahoo news group on Cuba.

The “Draft Guide for Economic and Social Policy” for the Fifth Congress of the Communist Party is available here: http://www.walterlippmann.com/pcc-draft-economic-and-social-policy-guidelines-2010.html

What follows here is the Blog entry for November 11, 2010 on the “Guidelines”.

I. “Structural Adjustment” on a Major Scale

On Tuesday, November 9, a major document appeared for sale in Cuba entitled “Proyecto de Lineamientos de La Political Economica y Social” or “Draft Guide for Economic and Social Policy.”  The purpose of the “Guide’ presumably is to spark and to shape public discussion and education on the economic matters that will be the focus of the long-postponed Sixth Congress of the Cuban Communist Party to take place in April, 2011. It also provides the essentials of the new approach that will likely be adopted at the Sixth Congress.

The “Guide” is a broad-reaching and comprehensive document that puts forward 291 propositions for the improvement of the functioning of the Cuban economy. It signals a break in the four years of near inaction that the Cuban economy endured since Raul Castro took over as acting and then actual President – and the ten years of paralysis from about 1995 to 2006 under President Fidel.  It amounts to a major process of “structural adjustment” of the sort that was begun in 1992-1994, but was then stalled when the Cuban economy appeared to rebound after 1994.  The document is also a contradiction and maybe a “slap-in-the-face” for Fidel Castro, as it indeed indicates that the Fidelista-style Cuban model – his life’s work – is not working. (See “Fidel’s No-Good Very Bad Day” and The “FIDEL” Models Never Worked; Soviet and Venezuelan Subsidization Did.)

II. General Character of the Proposals

The Table of Contents provides a quick idea of the scope of the document:

The Introduction summarizes the basic objectives required to overcome the principal problems of the economy. These include putting into productive use the unused lands constituting almost 50% of total, raising agricultural yields, developing new mechanisms to reverse the process of industrial and infrastructural de-capitalization, eliminating excess and redundant employment, raising labor productivity, recovery of export capacity in traditional exports, undertake studies in order to eliminate monetary dualism, and provide improved capacities for more decentralized regional development.

The “Contour” section then states that “…only socialism is capable of overcoming the difficulties and preserving the conquests of the Revolution, and the implementation of the economic model prioritizes planification and not the market”. However, the next paragraph states “…socialism is equality of rights and equality of opportunity for all citizens, not egalitarianism.” The latter sounds less like “socialism” and more like “social democrat” if not the common approach of most Western countries. The latter quotation makes the former somewhat hard to interpret if not meaningless.

The document then goes on to list the 291 propositions under the 12 different headings. A few of the more interesting propositions are summarized below:

This document will receive a great deal of attention inside and outside Cuba. It provides fodder – along with the recent legislation on self-employment – for analysts and observers of Cuba, who have had little of hard substance on which to base their analyses of Cuban policy under the “Raulista” Presidency for some time.

In some senses, this document is remarkable. It sets out an ambitious reform program for much of the Cuban economy. It may indeed constitute a “Wish List” of all the types of policy improvements and changes that would be nice to have. The question is “can and will they be implemented?”

This document also is a major risk for the Raul Castro Administration. It provides a check-list of tasks that will be difficult to achieve. If future implementation and economic performance is far below the expectations that are now being raised to high levels, there could well be a serious fall-out for the Government and the Party.

The document is also broad and ambitious but does not set any clear priorities and does not propose a sequence of actions. Everything can’t be done at once. How should the policy changes be phased or sequenced?

Some observers are skeptical and perhaps cynical regarding the “Guide” – for good historical reasons. In her Blog Entry entitled The Art of Speaking Without Speaking (http://www.desdecuba.com/generationy/?p=2088) Yoani Sanchez states:

When you grow up decoding each line that appears in the newspapers, you manage to find, among the rhetoric, the nugget of information that motivates, the hidden shreds of the news. We Cubans have become detectives of the unexpressed, experts in discarding the chatter and discovering — deep down — what is really driving things. The Draft Guidelines for the Communist Party’s VI Congress is a good exercise to sharpen our senses, a model example to evaluate the practice of speaking without speaking, which is what state discourse is here.

The Guide undoubtedly could be seen as an economic rescue program designed to rescue also the Communist party of Cuba, which faces steady de-legitimation as the economy deteriorates – even as the official GDP statistics appear to rise steadily.

What is missing from the “Guide”? Here is a first brief listing. Further analysis will be incorporated here later.

1.      Nothing is said regarding labor rights. A vital part of the reform approach if labor is to be used effectively would be freedom of association, collective bargaining and the right to strike. In the absence of these, pressures and insights from the grass roots to improve economic policy and its effectiveness are suppressed.

2.      Nothing is said regarding freedom of expression and the right to criticize the policies and institutions openly, honestly and continuously. The absence of this right leads to economic inefficiency and corruption as argued elsewhere. ( Freedom of Expression, Economic Self-Correction and Self-Renewal)

3.      No further elaboration of how the self-employment or micro-enterprise sector is presented, suggesting that the recent reforms are the end of the journey not a first step.

4.      The dedication to centralized determination of prices is problematic. If maintained strictly, it would make the decentralized decision-making allotted to enterprises for investment, the hiring of resource inputs, etc. meaningless, and the problems of trying to run the economy from a few office towers in Havana would continue. 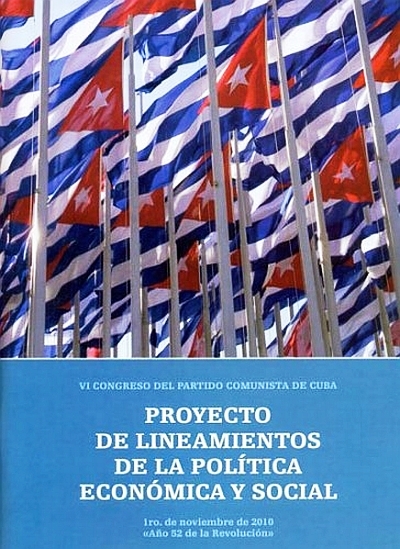