From The Cuba Standard: “Piñón on Energy: Analyzing Sherritt”

On February 24, The Cuba Standard published an analysis by Jorge R. Piñón by on Cuba’s energy sector focusing in particular on Sherritt International, which has a joint venture in oil extraction and refining, natural gas, electric power and nickel mining, concentrating, refining  and marketing.

The full article can be found here: http://www.cubastandard.com/2011/02/23/pinon-on-energy-analyzing-sherritt/

An introduction to Piñón’s analysis is presented below.

Crude oil: Crude oil prices reached this week a 30-month high of nearly $100 per barrel, with industrial residual fuel oil prices close behind at a 28-month high of $80. These price increases are reflected in Sherritt’s year-end 2010 financial reports released today.

Cuba’s onshore and coastal 2010 crude oil production is estimated at approximately 50,000 barrels per day, of which 11,128 barrels per day represents Sherritt’s net working interest (equity) production. This is an 11-percent decrease from 2009 levels of 12,489 barrels per day.  Sherritt sells this production to state oil company Cupet at a discounted U.S. Gulf Coast residual fuel oil price.

Sherritt and Cuba do not realize the true value of the island’s crude oil production — based on its refined products yield — because Cuban crude is used directly as industrial fuel for electric power plants, instead of optimizing its inherent value by processing it into high-value refined products such as gasoline, diesel and jet fuel.

Cuba’s realized crude oil value could substantially rise if it was able to market its crude oil to U.S. Gulf Coast refining companies.Realized prices should also rise once Cuba is able to monetize its heavy-oil production in planned conversion facilities at Cienfuegos and Matanzas.

High oil prices negatively impact Cuba’s balance of payments in two ways: Not only as the value of its crude oil imports from Venezuela under the 2000 Convenio Integral de Cooperación services for oil barter agreement increases, but also as it has to purchase part of its domestic crude oil production from Sherritt. We estimate that the total value of Venezuelan petroleum imports and the purchase of Sherritt equity production for 2010 will be approximately $2.894 billion. 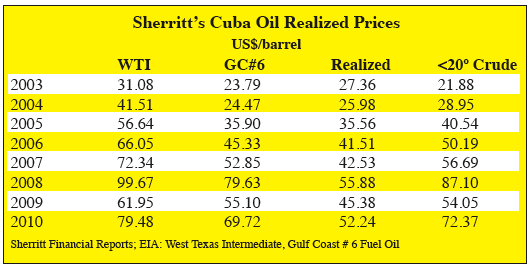 Canada’s Sherritt reported nickel and cobalt revenues for 2010 of $453.1 million, reflecting a 29-percent improvement over 2009 revenues of $350.7 million. The reported figures only reflect Sherritt’s 50-percent interest in the Moa/Saskatchewan nickel joint venture with Cubaníquel; therefore a similar improvement should mirror its Cuban partner operations.

Jorge R. Piñón was president of Amoco Corporate Development Company Latin America from 1991 to 1994; in this role he was responsible for managing the business relationship between Amoco Corp. and regional state oil companies, energy ministries and energy regulatory agencies