In the Nordic countries, agricultural co-operatives were important when family farmers organised to get access to the quickly developing markets during industrialisation in the late 1800s and early 1900s. These co-operatives were organised both as credit, insurance, processing and marketing co-operatives. Spreading at first from Denmark to the rest of Northern Europe and later reaching the new settler continent in North America, farmers’ co-operatives soon became a key element in private farming in market economies. As many co-operatives became large companies in the capitalist economies, they either became ordinary share companies, or retained their farmer-owned co-operative status like in Norway. After Marxist-inspired revolutions in Russia, China, Eastern Europe and later Vietnam and Cuba, state organised and government-controlled co-operatives were set up in socialist countries. Many of the old forms of agricultural co-operatives in the former Soviet Union and Eastern Europe collapsed when the centrally planned economies were abolished in the early 1990s. However, new forms of food production and distribution cooperation have emerged both in the capitalist and former socialist countries. These co-operatives were organised both among producers and consumers in order to meet the common needs of direct access to foods. While it is assumed that family farming and food markets will have to play a more important role in the Cuban food economy in the future, it will be interesting to see if small farmers in collaboration with wholesale co-operatives will be allowed to develop short and sustainable supply food chains, which could be competitive against state socialist and multinational capitalist agriculture. Cuban agricultural policy must be able to evolve along two strategies: a volume agriculture that delivers high-quality, durable basic foods to the predominantly urban population, but also delivers local traditional food with craftsmanship to tourists and a growing middle class. Both strategies will be necessary in order to address a historic challenge of the Cuban socio-economic development: to produce sufficient food and make it available to consumers at affordable prices, thus also saving scarce currency today spent on food imports. 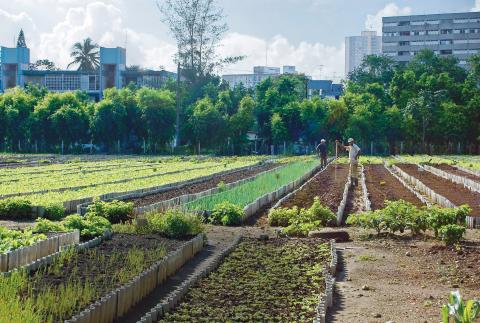 Organic Agricultural Cooperative in Urban Cuba
This entry was posted in Blog and tagged Agriculture, Cooperatives. Bookmark the permalink.