CARACAS (Reuters) – Cuba’s President Miguel Diaz-Canel flew to Caracas on Wednesday for his first foreign trip as head of state, a show of solidarity for Venezuela President Nicolas Maduro, whose controversial re-election this month has drawn condemnation in the West.

“I pledge to you that no matter how big the challenges, you can count on Cuba today and forever,” Diaz-Canel said after meeting Maduro in the Miraflores presidential palace. “Venezuela now needs our solidarity,” he earlier told Venezuela’s Constituent Assembly, a pro-government legislative super-body. 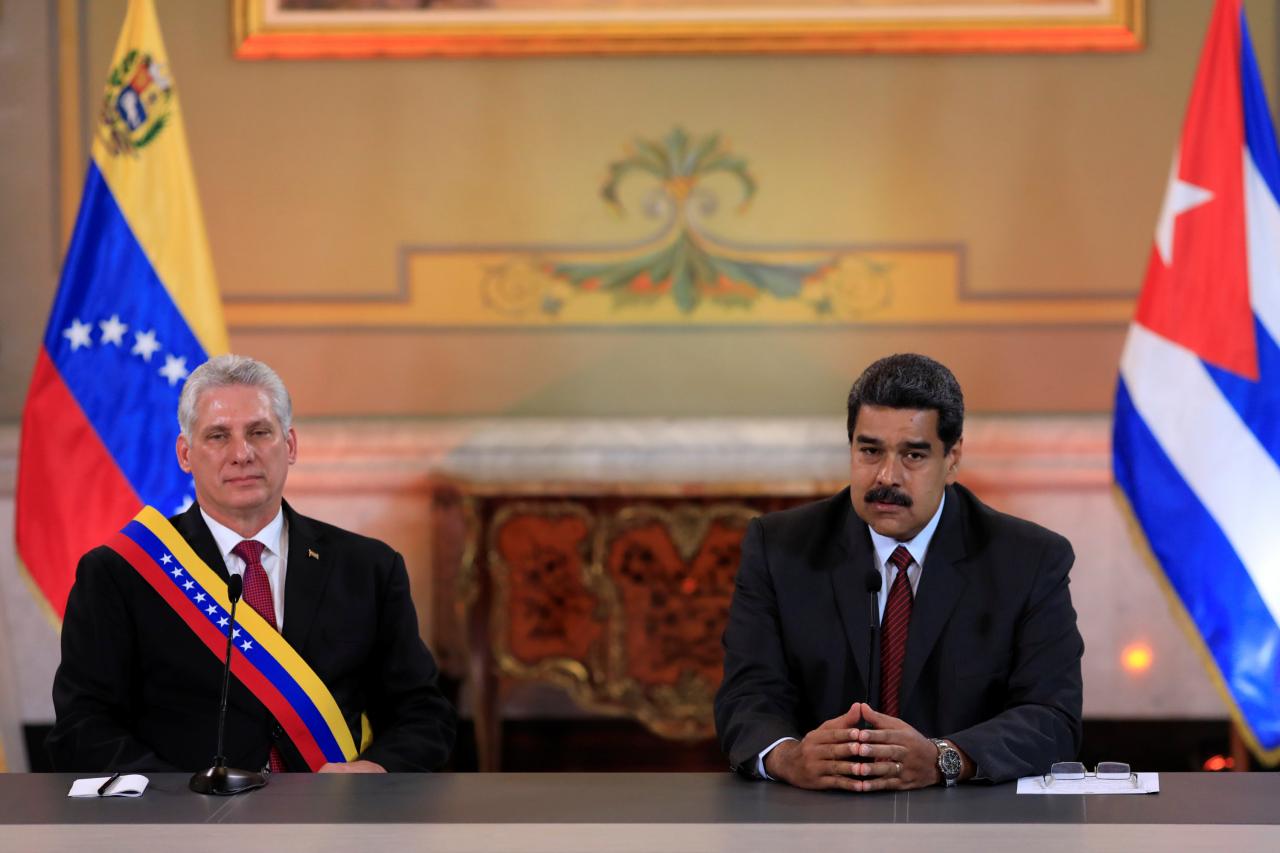 Venezuela’s President Nicolas Maduro speaks next to Cuba’s President Miguel Diaz-Canel during their meeting at the Miraflores Palace in Caracas, Venezuela May 30, 2018. REUTERS/Marco Bello

The United States, the European Union and major Latin American countries have condemned Maduro’s May 20 re-election, saying it did not meet democratic standards.

Two of his rivals were barred from standing and the election board is run by loyalists. The U.S. government imposed new sanctions on the crisis-stricken oil exporter.

But China and Russia have warned against meddling in the Socialist-run country, and fellow leftist governments in the region from Cuba to Bolivia have offered their support.

“Your words express the best of the Cuban people and we are forever grateful for the support you have given us,” said Delcy Rodriguez, a senior Maduro ally who heads the Assembly, which critics say has undermined the opposition-controlled legislature, the National Assembly.

Maduro was the first foreign leader to meet with Diaz-Canel last month after he succeeded Raul Castro to become president of the Communist-run island.

Venezuela, which holds the world’s largest oil reserves, exchanges crude for Cuban medical and other technical services, though deliveries have dropped in recent years during an economic implosion in the country of 30 million people.

“We felt (Maduro’s) victory as our own,” Diaz-Canel said. “Venezuela has supported Cuba in many ways throughout its history. We have a debt of gratitude.”

Venezuelan opposition politicians say bilateral relations with Cuba are deeply unfavorable.  “Maduro did not sell the country, he handed it over. NATIONAL SHAME!” tweeted opposition lawmaker Juan Guaido, posting a picture of Diaz-Canel wearing a sash with the yellow blue and red Venezuelan colors on Wednesday.

Diaz-Canel flew to Venezuela with his wife Liz Cuesta as first lady, in a break with custom during the nearly 60 years’ rule by the Castro brothers Fidel and Raul who generally traveled without their spouses.

Diaz-Canel’s visit came as Cuban authorities faced the chaos of flooding in the wake of Subtropical Storm Alberto that has killed already four people and prompted the evacuation of tens of thousands.