YOUR MIND IS IN PRISON: CUBA’S WEB OF CONTROL OVER FREE EXPRESSION AND ITS CHILLING EXPRESSION ON EVERYDAY LIFE

2. THE TIP OF THE ICEBERG

2.1 THE RIGHTS TO FREEDOM OF EXPRESSION AND ASSOCIATION

2.3 HUMAN RIGHTS STANDARDS AND THE APPLICATION OF THE CRIMINAL LAW

3.1 HARASSMENT AND WRONGFUL DISMISSALS IN THE STATE SECTOR

3.2 A VICIOUS CYCLE: HARASSMENT IN THE SELF-EMPLOYED SECTOR

3.3 IMPRISONED AND DISCRIMINATED FOR TRYING TO LEAVE THEIR OWN COUNTRY

3.5 THE APPARENT LACK OF EFFECTIVE RECOURSE FOR DISCRIMINATORY DISMISSAL

3.7 FEAR OF RETURNING TO THEIR OWN COUNTRY

4. BELOW THE SURFACE OF THE ICEBERG

TO THE CUBAN GOVERNMENT

TO THE US CONGRESS 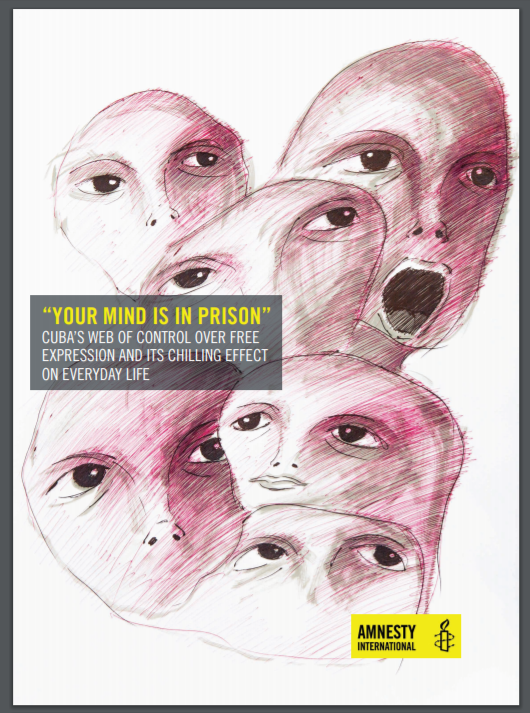 The past few years have been a bitter-sweet period for those hoping for the Cuban authorities to relax their iron grip on people’s right to freedom of expression and assembly.

High-profile visits by the International Committee of the Red Cross and Pope Francis in 2015, as well as by the UN Special Rapporteur on trafficking in persons, especially women and children and the UN Independent Expert on human rights and international solidarity in 2017, appeared to herald greater political openness and to offer some hope that Cuba might begin to open itself up to increased international scrutiny by independent human rights monitors. A tourism boom, the expansion of Wi-Fi-internet hotspots, even a first ttime performance by the rock band the Rolling Stones (foreign rock music was deemed subversive in Cuba for decades) were other small signs that Cuba might be releasing its tight control on freedom of expression. The re-establishment of diplomatic relations between Cuba and the USA starting in December 2014, followed by then President Obama’s state visit to Cuba in 2016 also seemed to promise the beginning of an end to the economic embargo which for decades has perpetuated the Cold War rhetoric of “us” and “them” and undermined ordinary Cubans’ enjoyment of economic and social rights.

This optimism makes the jarring reality all the more marked. Hours before President Obama landed in Cuba, dozens of activists and independent journalists were detained. In a joint press conference with the US President, President Raúl Castro continued to flatly deny that there were any “political prisoners” in Cuba.

In contrast, in the past three years, Amnesty International has named 11 prisoners of conscience in Cuba, and there are likely many more. Further, a national human rights organization, not recognized by the Cuban authorities, reported an average of 762 politically motivated and arbitrary detentions a month between 2014 and 2016.

Human rights lawyers from the organization Cubalex were harassed and intimidated, despite having been granted precautionary measures by the Inter-American Commission on Human Rights (IACHR) to protect their lives, personal integrity and activities as human right defenders. In May 2017, at least 12 of its members were granted asylum in the USA after the Cuban authorities threatened to bring criminal charges against them related to a tax investigation. The Committee to Protect Journalists (CPJ) ranked Cuba 10th on its 2015 list of the world’s most censored countries and classified its laws on free speech and press freedom as the most restrictive in the Americas. Amnesty International media remains heavily censored and limited. While an increasing range of autonomous digital media projects has emerged, alternative online news sources operate within a legal limbo that exposes journalists and media workers to the risk of harassment and arbitrary detention. Moreover, their web pages are often blocked by the authorities in Cuba. In early 2017, the expulsion of a journalism student reportedly pushed out of university for being a member of the group Somos, considered a dissident organization by the authorities, received widespread international and independent national media coverage. According to press reports, one of Cuba’s most famous singers, Silvio Rodríguez, called the expulsion an “injustice” and “clumsy and obtuse.”

In June 2017, President Trump’s administration took an almost complete U-turn on US political rhetoric towards Cuba reducing the likelihood that the US Congress will pass legislation to lift the economic embargo on Cuba. Despite the easing of some restrictions by the former Obama administration, which has allowed for increased travel and remittances between the two countries, and annual votes by a majority of UN member states to lift it, the embargo remains in place. Amnesty International has consistently recommended that the US embargo be lifted, based on its negative impact on the economic and social rights of the Cuban population. Meanwhile, a recent poll by the University of Chicago found that many Cubans “feel stuck in the current economic climate.”

Few expect the economy will improve anytime soon and 46% described it as poor or very poor. Cuba’s fragile economy has inevitably been impacted by the ongoing economic and human rights crisis in Venezuela – a provider of significant economic aid to Cuba in recent years. Exceptionally low salaries – the average monthly salary is approximately USD27 a month – are insufficient to cover basic needs. Ordinary Cubans continue to struggle, despite the government’s food ration system, taking additional jobs in the informal sector and receiving remittances from family members living overseas.16 In July 2017, the Secretary General of the Central Union of Cuban Workers (Central de Trabajadores de Cuba, CTC), the country’s only officially recognized trade union, stated in an interview that average salaries are unable to meet workers’ basic needs and create “apathy in work, lack of interest and significant labour migration”, an issue that he said is being evaluated by decision-making bodies.

While many Cubans interviewed for this briefing told Amnesty International that they felt Cuba has made important human rights advances in the provision of free health care and access to education and valued the fact that there is little organized crime in the country, many also described the day-to-day struggle of having to make difficult choices between feeding and clothing their families. People interviewed by Amnesty International said that food rations – which have been progressively reduced – are insufficient to last the month. And while education is free, many Cubans find it difficult to buy the things their children need to attend school, such as uniforms, backpacks and other basic supplies. For example, an administrator in a state food factory told Amnesty International she earned USD20 a month at a time when shoes for her child could easily cost USD30. Many people interviewed said they had to break the law to make ends meet. The same administrator also described how one of her job responsibilities was to ensure that workers did not steal bread or other essentials they need to survive.

Former President Fidel Castro’s death in November 2016, and President Raúl Castro’s announcement that he would step down in 2018 continue to fill opinion columns with speculation about Cuba’s future. But while in political quarters and international news rooms Cuba remains a hot topic, tens of thousands of Cubans continue to leave the country. Their individual reasons may vary, but common threads are disillusion with Cuba’s changing international diplomacy, a lack of confidence that salaries will improve18 and scepticism at the idea that a post-Castro administration will do anything to untangle the tight web of control on freedom of expression. Amnesty International’s interviews with Cuban migrants highlight this widespread and profound lack of belief in the prospect of structural change. This briefing examines limitations on freedom of expression that persist in Cuba despite the context of purported political openness, a tourism boom and a changing economic context. It is based on research carried out between December 2016 and September 2017, although Amnesty International´s lack of access to Cuba has posed a significant limitation on providing an analysis of human rights issues in the country. The interviews the organization conducted with Cubans for this briefing have made it possible to identify the impact on a wide range of people of 50 years of serious restrictions on the rights to freedom of expression and peaceful assembly.

The failure of the authorities to respect and ensure these rights has had an impact far beyond the ranks of those directly targeted for their activism or views and seeped into the everyday experiences and hopes of people from all walks of life.

This briefing focuses on those wider influences and on the human rights advances that those affected would want to see. As Cuba prepares for elections in 2018, the diverse Cuban voices at the centre of this research highlight the need for authorities to promote reforms that ensure the respect and protection of human rights, including a review of criminal laws and practices which are inconsistent with international human rights law and standards and that unduly limit freedom of expression. They also underscore the need for the authorities to adhere to international labour standards which Cuba has undertaken to uphold by ratifying International Labour Conventions. The briefing ends with a set of recommendations calling on the authorities to end unjust restrictions not only on those unfairly deprived of their physical freedom, but also on those who feel their minds are imprisoned and their lives stunted because they are deprived of their right to freedom of expression.