CUBA’S FIRST EXPORT TO THE UNITED STATES SINCE 1961: ARTISANAL CHARCOAL

Artisanal charcoal will become the first legal Cuban export to the United States in decades under a deal announced Thursday between Cuba’s government and the former lawyer for imprisoned U.S. government contractor Alan Gross.

Attorney Scott Gilbert, who has sought to build economic ties between the two countries since Gross’ release, said a company that he founded will buy 40 tons of charcoal made from the invasive woody plant marabu. The charcoal is produced by hundreds of worker-owned cooperatives across Cuba and has become an increasingly profitable export, valued for its clean-burning properties and often used in pizza and bread ovens.

Gilbert’s company will pay $420 a ton, which is significantly above the wholesale market price of about $360. The first delivery is scheduled for Jan. 18, two days before the inauguration of Donald Trump as U.S. president.

Products of privately run or cooperative farms in Cuba can be exported to the United States under measures introduced by President Barack Obama after the Dec. 17, 2014, declaration of detente with Cuba. The measures loosen a 55-year-old trade embargo on Cuba.

The charcoal is sold by cooperatives to a local packager, which sells it on to state-run export firm CubaExport. Each middleman takes a 1 percent or 2 percent commission, CubaExport general director Isabel O’Reilly said. CubaExport said the charcoal would be the first legal export to the United States in more than five decades, and it hoped to expand the deal to include honey and coffee.

The charcoal will be sold to restaurants and online to consumers in 33-pound bags under the brand name Fogo, Gilbert said.

Cuba sells about 40,000 to 80,000 tons of marabu charcoal annually to buyers in Italy, Germany and about a half dozen other countries, O’Reilly said.

Attorney Scott Gilbert, left, president of the U.S. company Coabana Trading LLC and Isabel O’Reilly, director of CubaExport, sign an agreement allowing the export of Cuban charcoal to the United States in Havana, Cuba, on Jan. 5, 2017.

Gilbert said he was confident the Trump administration would allow the deal to continue, even though the president-elect has promised to reverse much of Obama’s opening with Cuba unless the island’s communist government makes political concessions.

“I think that once they have examined this situation and looked at all the facts, that they will be supportive of increased engagement and the economic changes that it will bring,” Gilbert said.

Under Obama’s changes, American visitors to Cuba can return with unlimited rum and cigars, but state-run companies cannot export those products to the U.S. 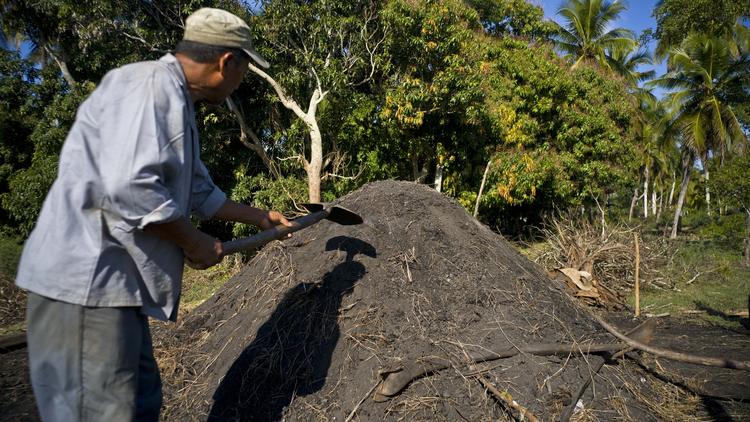 A man prepares artisanal charcoal at a farm on the outskirts of Havana, Cuba, on Jan. 5, 2017. Artisanal charcoal will become the first Cuban export to the U.S. this month under a new deal between the Cuban government and the former lawyer for imprisoned U.S. government contractor Alan Gross.

This entry was posted in Blog and tagged Exports, US-Cuba Normalization. Bookmark the permalink.