CAN DONALD TRUMP AND RAÚL CASTRO MAKE A GOOD DEAL 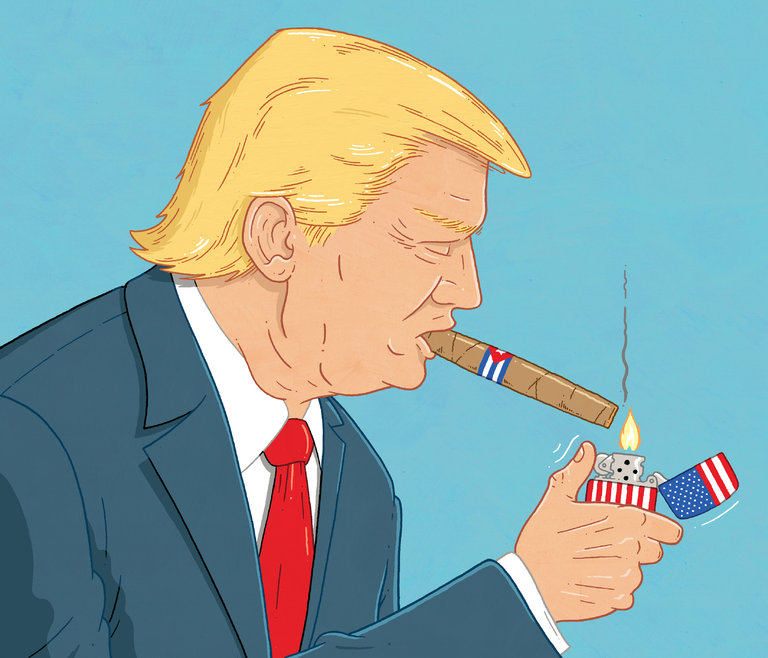 CAMBRIDGE, Mass. — Cuba operates as if it had two parties, President Raúl Castro joked in his main report to the Seventh Congress of the Cuban Communist Party last April: “Fidel leads one and I, the other.”

This was more than just a joke: Fidel Castro, Raúl Castro’s brother and the former president, had criticized President Obama’s visit to Havana a month earlier in official publications. It was the first public split between the brothers on an issue of such importance. President Obama’s Cuba policy change, announced in December 2014, drove a wedge through the Cuban leadership, making manifest the differences between government hard-liners and soft-liners. For the balance of 2016, the hard-liners dominated official communications, republishing tales of American perfidy over the previous two centuries. During the same period, however, Raúl Castro’s senior team negotiated and signed many practical agreements to alter American-Cuban relations.

Fidel Castro is now dead; the ossified government he nurtured is vanishing as well. Since taking power in 2008, Raúl Castro has made many domestic and foreign policy changes that happen to be in line with key foreign policy priorities of the American president-elect, Donald J. Trump, and at the same time open up Cuba’s economy, and society. A deal-making Trump presidency will find a deal-honoring Raúl Castro presidency. The agreements that the Trump administration will inherit, reached under Mr. Trump’s three predecessors, serve both the interests of the United States and Cuba as well as the presumed Trump presidential agenda. Reversing or scaling back such agreements, as Mr. Trump has threatened to do, will make it more difficult for him to fulfill that agenda.

Recent agreements between the two countries make it easier for them to cooperate on hurricane tracking and biodiversity protection, share information on pollution and undertake joint maritime geological exploration. Other agreements protect migratory birds and fish. Cuba and the United States now also work together on cancer research, in which Cuban scientists have registered significant advances, and on the prevention and cure of infectious diseases, including combating the Zika epidemic, in which Cuba is a worldwide example of effectiveness.

Cuba and the United States have long cooperated on security matters, coordinating on security around the United States Navy base at Guantánamo Bay. Since the mid-1990s, the two countries have worked together to prevent undocumented migration. Cuba patrols its ports to prevent anyone from stealing boats and rafts; at its airports, it checks for valid visas among those about to board. United States Coast Guard cutters intercept undocumented migrants in the Straits of Florida and return them to Cuba.

The two countries have informally combined efforts on drug traffic interdiction since the 1990s, and this was formalized last July; Cuba provides an effective barrier against drug traffic into the United States.

And Cuba long ago adopted the Trump-preferred migration policy: seek to stop the departure and accept the return of undocumented migrants.

Suppose you are the United States president-elect. What is not to like?

Still, while economic agreements emphasize the two countries’ equality, some of the deals couldn’t be more lopsided. Only American airlines fly between the two countries; Cubana de Aviación does not. And since late 2002, Cuba has purchased about $5.3 billion worth of United States agricultural products, paying cash, while exporting almost no goods to the United States.

What’s wrong with agreements already in place that benefit both countries? The United States wants to warn Florida and the Carolinas about hurricane trajectories, its fowl and fish to winter in Cuba’s Caribbean waters and come back, and to benefit from Cuba’s scientific expertise. Cuba and the United States are interested in exploring for oil in the Gulf of Mexico and have agreed to track seismic threats beneath the gulf’s waters to prevent oil spills.

On delicate issues, President George W. Bush and Fidel Castro, and later President Obama and Raúl Castro, developed ways of agreeing substantively while publicly denying any negotiation had taken place. That diplomatic ruse worked. In 2002, the Cubans induced the Bush administration to begin exporting American agricultural products; each side made it known that these were unilateral, independent and sovereign decisions. In December 2012, the United States and Cuba did not trade spies; rather, each made unilateral, independent and sovereign decisions to release some of the other’s prisoners.

Slowly, United States-Cuba relations got better. That serves Cubans who may travel more easily, receive friends, rent space through Airbnb, and get working capital through money transfers to establish private businesses and fund an independent civil society. That serves Americans who benefit from freer travel and cooperation on issues such as migration, crime and drug trafficking. What next? Rely on unilateral, independent and sovereign Cuban decisions to foster change.

Here’s how Raúl Castro’s joke ended at the April party congress: “Fidel will certainly say, ‘I want to lead the Communist Party,’ and I will say, ‘O.K., I’ll lead the other one, the name does not matter.’ ” If you are a Cuban hard-liner, that joke is terrifying. President Raúl Castro is prepared to open the gateway to something different, less dogmatic, whose name neither he nor we know. But we know what it is not. It is not called “Communist.”

This entry was posted in Blog and tagged Trump, US-Cuba Normalization. Bookmark the permalink.