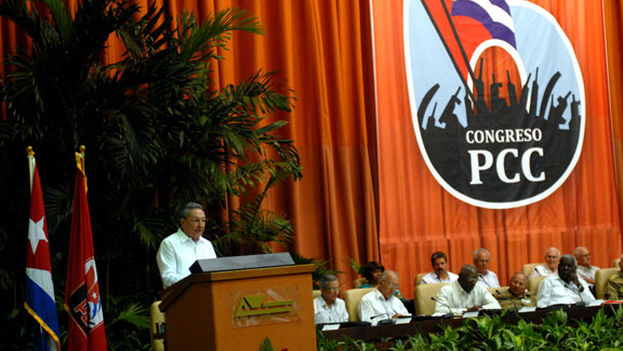 President Raul Castro at the Sixth Congress of the Communist Party, April 2011.

Victor Rodriguez imagines a future Cuban economy that will let him import large quantities of thread, export the women’s clothing he designs and keep him from worrying about obtuse regulations such as where he can place items on his small retail stand.

“Maybe then I could think about opening a full store,” he said.

One month after President Barack Obama’s visit, islanders are now looking to Cuba’s upcoming Communist Party congress for the clearest picture yet of how far their leaders will open the economy to deeper free-market reforms — if at all.

The congress being held April 16-19 comes at a critical juncture in Cuba’s history, with diplomatic relations with the U.S. generating enthusiasm but bringing limited improvements to the island’s ailing economy. It’s also likely to be the last Communist Party congress with any Castro in power as President Raul Castro has said he intends to retire in 2018 when he will be 85, turning 86 that June. His older brother Fidel stepped aside at age 79 in 2006 in what he said was a temporary move after suffering a serious illness and retired for good two years later.

“This is basically setting the future of Cuba,” said Carmelo Mesa-Lago, an economics professor at the University of Pittsburgh.

The congress has already generated much attention with party members complaining about a lack of the advance debate on economic and social reforms seen in the past. The party’s official newspaper, Granma, published a lengthy article explaining that instead of inviting new public discussion of reforms, this year’s congress will focus on the continued implementation of market-oriented changes enacted in 2011 in Cuba’s most significant economic overhaul to date.

“Everybody’s wondered since 2011, what’s the end game?” said William LeoGrande, an American University expert on U.S.-Cuba relations. “What are they anticipating Cuba will look like when the restructuring is done? Will it look like Vietnam? China? Something else?”

Based on the Marxist-Leninist model, the Communist Party of Cuba is the only legal political party on the island. It holds its congress roughly every five years to map the island’s political, social and economic future — except for a 14-year stretch from 1997-2011.

The latest congress will bring together 1,000 party members from throughout the island to discuss Cuba’s plan going forward. Among the things members will consider this year is a description of the island’s economic development model through 2030.

So far, Cuban leaders have indicated the government intends to maintain strong control of the island’s centrally planned economy. Less clear are the roles the state and private market will play, and how much the non-state sector will be permitted to expand.

Since assuming power in 2006, Castro has instituted scattered free-market reforms to alleviate the island’s deep fiscal woes while preserving the communist system ushered in by the 1959 revolution. In 2010, he announced plans to permit more small businesses and reduce state employment. The 2011 Communist Party congress passed 313 resolutions that included legalizing car sales, encouraging the development of mid-size cooperatives with dozens of employees and eliminating an exit permit all Cubans once needed to travel outside the country.

Cubans were also permitted to buy and sell homes for the first time since the early years of the revolution.

Emilio Morales, an economic analyst who heads the Miami-based Havana Consulting Group, said the reforms to date have encouraged the growth of a small business sector that includes retail enterprises like Rodriguez’s clothing stand, stylish new restaurants and polished 1960 Cadillacs and other old cars serving as taxis. About 500,000 Cubans now run their own businesses, yet total private-sector employment represents just a fraction of the economy — an estimated 23 percent of all employment in 2014, compared to 18 percent in 2011.

There are signs the number of self-employed workers could be leveling off: According to Cuban state figures, there were 496,400 in January, down from 504,600 in May 2015.

To increase that number, Morales said the government must lift restraints on access to wholesale markets and expand private enterprise to fields such as law and engineering, which currently aren’t among the 201 categories of small businesses allowed.

Many Cubans are anxious to see their economy grow; the vast majority struggle to meet daily needs, with state workers earning an average of $20 per month. Many say they want Cuba to preserve universal benefits such as free education and health care.

Six Communist Party members interviewed by The Associated Press said they believe the congress will move to expand private businesses but not embark on dramatic reforms. President Castro has cautioned he wants to move “slowly but surely” and that Cuba won’t administer “shock therapy.”

“I think we’ll keep moving in the same direction, enabling small private property, expanding some aspects of commercialization,” said Esteban Morales, one of the party members interviewed and a noted intellectual.

Analysts have viewed China and Vietnam as examples of how Cuba might preserve its socialist system while moving toward a market-driven economy. Yet Cuba scholars say the reforms to date have been relatively minor compared to the early stages of mixed socialist-free market economies in those countries.

Party watchers will also be waiting to see what the congress says about Cuba’s political future after Castro retires. Many in 2011 expected him to “rejuvenate” the party of 700,000 members by appointing young leaders to key positions. He ultimately named revolutionary figures Jose Ramon Machado Ventura, then 80, and Ramiro Valdes, then 78, as his principal deputies.

Many believe Castro now has no choice but to appoint younger leaders.

“First we have to resolve the economic problem, that’s a priority,” said Carlos Alzugaray, a longtime Cuban diplomat and analyst. “But there is a particular juncture in Cuba right now, which I call a generational transition. And we need to create the institutions that will help that new generation to govern the country effectively.”