Original article: Dissent inside the Party 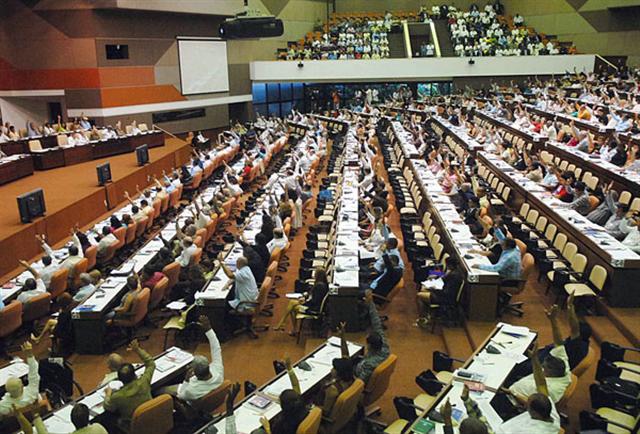 HAVANA (AP) — Days after President Barack Obama’s historic visit, the leaders of Cuba’s Communist Party are under highly unusual public criticism from their own ranks for imposing new levels of secrecy on the future of social and economic reforms.

After months of simmering discontent, complaints among party members have become so heated that its official newspaper, Granma, addressed them in a lengthy front-page article Monday. It said the public dissatisfaction over the lack of open discussion before the upcoming Communist Party congress next month is “a sign of the democracy and public participation that are intrinsic characteristics of the socialism that we’re constructing.”

The article did little to calm many party members, some of whom are calling for the gathering to be postponed to allow public debate about the government’s plans to continue market-oriented reforms for Cuba’s centrally controlled economy.

“The base of the party is angry, and rightly so,” party member and noted intellectual Esteban Morales wrote in a blog post published before Obama’s visit. “We’ve gone backward in terms of democracy in the party, because we’ve forgotten about the base, those who are fighting and confronting our problems on a daily basis.”

Across the country, Cuba’s ruling party is facing stiff challenges as it tries to govern an increasingly cynical and disenchanted population.

Struggling to feed their families with state salaries around $25 a month, many ordinary Cubans see their government as infuriatingly inefficient and unresponsive to the needs of average people. The open anger among prominent party members in the middle of sweeping socio-economic reforms and normalization with the United States hints at a deeper crisis of credibility for the party that has controlled virtually every aspect of public life in Cuba for more than a half century.

The article in Granma appeared less than a week after Obama won an enthusiastic response from many ordinary Cubans by calling for both an end to Cold War hostility and for more political and economic freedom on the island. The unsigned article shared the front page with Fidel Castro’s sharply worded response to Obama, in which the 89-year-old father of Cuba’s socialist system said, “My modest suggestion is that he reflect and doesn’t try to develop theories about Cuban politics.”

Many Cubans are skeptical of free-market capitalism, wary of American power and cannot envision a society without the free health care and education put in place by the 1959 revolution. Party member Francisco Rodriguez, a gay activist and journalist for a state newspaper, said Obama’s nationally televised speech in Old Havana, his news conference with 84-year-old President Raul Castro and a presidential forum with Cuban entrepreneurs represented a sort of “capitalist evangelizing” that many party members dislike.

Rodriguez told The Associated Press that Obama’s well-received addresses to the Cuban people had nonetheless increased pressure on the 700,000-member Communist Party to forge a more unified and credible vision of the future.

“Obama’s visit requires us, going forward, to work on debating and defending our social consensus about the revolution,” Rodriguez said.

While Cuba’s non-elected leaders maintain tight control of the party and the broader system, the last party congress in 2011 was preceded by months of vigorous debate at party meetings about detailed documents laying out reforms that have shrunk the state bureaucracy and allowed a half million Cubans to start work in the private sector.

In the run-up to the party congress scheduled to begin April 16, no documents have been made public, no debate has taken place and many of the party’s best-known members remain in the dark about the next phase of Cuba’s reforms. Granma said 1,000 high-ranking party members have been reviewing key documents.

“My dissatisfaction is rooted in the lack of discussion of the central documents, secret to this day, as much among the organizations of the party base as the rest of the population,” Rodriguez wrote in an open letter Sunday to Raul Castro, who is also the top Communist Party leader.

Under Castro’s guidance, the 2011 party congress helped loosen state control of Cubans’ economic options and some personal freedoms, moving the country toward more self-employment, greater freedom to travel and greater ability to sell personal cars and real estate. The Granma article argued that the months of debate before the approval of those reforms made a new round of public discussion unnecessary. It also acknowledged that only 21 percent of the reforms had been completed as planned.

The April 16-19 party congress “will allow us to define with greater precision the path that we must follow in order for our nation, sovereign and truly independent since Jan. 1, 1959, to construct a prosperous and sustainable socialism,” the article said.

Rodriguez, who works closely with Castro’s daughter Mariela, the director of the national Center for Sexual Education, said the Granma piece was unsatisfactory. He called for the Seventh Party Congress to be delayed, saying many fellow party members share his point of view.

In the days after the Granma article appeared about two dozen people, many identifying themselves as party members, posted lengthy comments on the paper’s government-moderated website that criticized the article and the secrecy surrounding the upcoming party congress, which is widely seen as helping mark the transition of power from the aging men who led Cuba’s revolution to a younger generation.

“It is one of the last congresses directed by the historic generation,” wrote one poster identifying himself as Leandro. “This is, I think, a bad precedent for future leaders, who will feel like they have the right to have party congresses without popular participation.”

This entry was posted in Blog and tagged Communist Party of Cuba, Democracy, Dissidents, Politics. Bookmark the permalink.