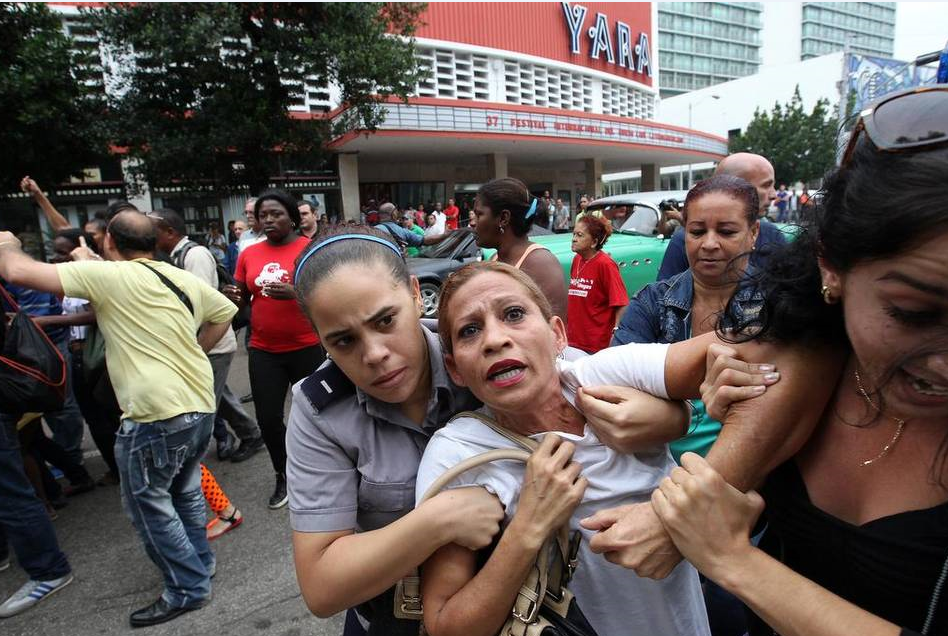 The Cuban government continues to repress dissent and discourage public criticism. It now relies less on long-term prison sentences to punish its critics, but short-term arbitrary arrests of human rights defenders, independent journalists, and others have increased dramatically in recent years. Other repressive tactics employed by the government include beatings, public acts of shaming, and the termination of employment.

In December 2014, President Barack Obama announced that the United States would ease restrictions on travel and commerce and normalize diplomatic relations with Cuba. In exchange, the Cuban government released 53 political prisoners and committed to allow visits by international human rights monitors. The two governments restored diplomatic relations in July 2015.

The government continues to rely on arbitrary detentions to harass and intimidate people who exercise their fundamental rights. The Cuban Commission for Human Rights and National Reconciliation, an independent human rights group that the government views as illegal, received more than 6,200 reports of arbitrary detentions from January through October 2015. While this represented a decrease from the number of detentions during the same 10-month period in 2014, it was still significantly higher than the number of yearly detentions prior to 2012.

Security officers virtually never present arrest orders to justify the detention of critics. In some cases, detainees are released after receiving official warnings, which prosecutors can use in subsequent criminal trials to show a pattern of delinquent behavior.  Detention is often used preemptively to prevent people from participating in peaceful marches or meetings to discuss politics. Detainees are often beaten, threatened, and held incommunicado for hours or days. Members of the Ladies in White (Damas de Blanco)—a group founded by the wives, mothers, and daughters of political prisoners and which the government considers illegal—are routinely harassed, roughed up, and detained before or after they attend Sunday mass.

Lazaro Yuri Valle Roca, a blogger and videographer who often covers the Sunday demonstrations of the Ladies in White, wrote that police arbitrarily detained him on June 7 and drove him 30 miles from Havana, where they took him from the car at gunpoint, made him kneel on the grass, and put the gun to his neck, telling him he was “on notice” to stay away from the demonstrations.

The artist Tania Bruguera was arrested on December 30, 2014, hours before her planned performance art piece in Havana’s Revolution Square, in which she was to have invited passersby to walk up to a podium and express themselves at a microphone for one minute. Security officials confiscated her passport and computer. Bruguera was released the following day but was detained and released twice more during the next two days. Cuban dissidents and independent journalists who had planned to attend the event—including Reinaldo Escobar, Eliecer Avila, and Antonio Rodiles—were also arrested on December 30. Bruguera was again detained in May during the 12th Havana Biennial Art Exhibition. She was released the same day.

On August 9, a few days before US Secretary of State John Kerry was to attend a ceremony to mark the opening of the US embassy in Havana, 90 people—including an estimated 50 Ladies in White—were arrested and detained after Sunday mass in the Havana neighborhood of Miramar during a peaceful march against political repression.

During the visit of Pope Francis in September, police detained some 100 to 150 dissidents to prevent them from seeing him. Miriam Leiva, a freelance journalist and blogger and a founder of the Ladies in White, was invited by the Papal Nuncio in Havana to greet the Pope twice, on September 19 and 20, but was detained for several hours each time, preventing her attendance.

Despite the release of the 53 political prisoners in conjunction with the agreement to normalize relations with the US, dozens more remain in Cuban prisons, according to local human rights groups. The government prevents independent human rights groups from accessing its prisons, and the groups believe there are additional political prisoners whose cases they cannot document.

Cubans who criticize the government continue to face the threat of criminal prosecution. They do not benefit from due process guarantees, such as the right to fair and public hearings by a competent and impartial tribunal. In practice, courts are subordinated to the executive and legislative branches, denying meaningful judicial independence.

Graffiti artist Danilo Maldonado, known as “El Sexto,” was arrested in December 2014 and charged with “contempt for authority” for attempting to stage a performance involving two pigs painted with the names “Raul” and “Fidel”—a satire of the current and former heads of state. He was released on October 20.

The government controls virtually all media outlets in Cuba and restricts access to outside information, severely limiting the right to freedom of expression.

A small number of journalists and bloggers who are independent of government media manage to write articles for websites or blogs, or publish tweets. However, the government routinely blocks access within Cuba to these websites, and those who publish information considered critical of the government are subject to smear campaigns and arbitrary arrests, as are artists and academics who demand greater freedoms.  Only a fraction of Cubans are able to read independent websites and blogs because of the high cost of, and limited access to, the Internet. In July, Cuba increased Internet access by opening 35 Wi-Fi hot spots in parks and city boulevards nationwide. The US$2-an-hour Wi-Fi connection fee is expensive in a country where the average wage is approximately $20 a month.

Reforms to travel regulations that went into effect in January 2013 eliminated the need for an exit visa to leave the island. Exit visas had previously been used to deny the right to travel to people critical of the government—and to their families. Since then, many people who had previously been denied permission to travel have been able to do so, including human rights defenders and independent bloggers.

Nonetheless, the reforms gave the government broad discretionary powers to restrict the right to travel on the grounds of “defense and national security” or “other reasons of public interest.” Such measures have allowed the authorities to deny exit to people who express dissent. For example, José Daniel Ferrer, the leader of the Patriotic Union of Cuba (Unpacu), was denied the right to travel abroad in August for “reasons of public interest,” authorities said.

The government restricts the movement of citizens within Cuba through a 1997 law known as Decree 217, which is designed to limit migration to Havana. The decree has been used to prevent dissidents from traveling to Havana to attend meetings and to harass dissidents from other parts of Cuba who live there.

Prisons are overcrowded. Prisoners are forced to work 12-hour days and punished if they do not meet production quotas, according to former political prisoners. Inmates have no effective complaint mechanism to seek redress, and those who criticize the government or engage in hunger strikes and other forms of protest are subjected to extended solitary confinement, beatings, restrictions on family visits, and denial of medical care.  While the government allowed select members of the foreign press to conduct controlled visits to a handful of prisons in April 2013, it continues to deny international human rights groups and independent Cuban organizations access to its prisons.

Despite updating its Labor Code in 2014, Cuba continues to violate conventions of the International Labour Organization that it has ratified, specifically regarding freedom of association, collective bargaining, protection of wages and wage payment, and prohibitions on forced labor. While the formation of independent unions is technically allowed by law, in practice Cuba only permits one confederation of state-controlled unions, the Workers’ Central Union of Cuba.

In January, a month after announcing plans to normalize diplomatic relations with Cuba, President Obama called on the US Congress to lift the economic embargo of Cuba imposed more than four decades ago. The United Nations General Assembly has repeatedly called on the United States to end the embargo, most recently in October by a vote of 191 to two.

At time of writing, Cuba had yet to allow visits to the island by the International Committee of the Red Cross or by UN human rights monitors, as stipulated in the December 2014 agreement with the US.

The European Union continues to retain its “Common Position on Cuba,” adopted in 1996, which conditions full EU economic cooperation with Cuba on the country’s transition to a pluralist democracy and respect for human rights. After a meeting in April 2014 in Havana, EU and Cuban delegates agreed on establishing a road map for “normalizing” relations. A fifth round of negotiations towards an EU-Cuba Political Dialogue and Cooperation Agreement took place in Havana in September 2015, and a sixth round was scheduled for late November.

In November 2013, Cuba was re-elected to a regional position on the UN Human Rights Council, despite its poor human rights record and consistent efforts to undermine important council work. As a member of the council, Cuba has regularly voted to prevent scrutiny of serious human rights abuses around the world, opposing resolutions spotlighting abuses in North Korea, Syria, Iran, and Ukraine. However, Cuba supported a landmark resolution the council adopted in September 2014 to combat violence and discrimination based on sexual orientation and gender identity.

This entry was posted in Blog and tagged Dissidents, Freedom of Assembly, Freedom of Expression, Freedom of Movement, Human Rights, Politics. Bookmark the permalink.