Original here: The Caribbean country could be the next frontier of global business

Taking Cuba off the list of nations that sponsor terrorism is the latest development that will attract foreign companies to the island. So who wants in? These five stats explain which industries present the most opportunities as Cuba opens for business.

One of the immediate benefits of renewed relations with Cuba is the increase in permitted remittance flows. The most recent figures put annual cash remittances to Cuba at approximately $5.1 billion, a level greater than the four fastest growing sectors of the Cuban economy combined. Now, permitted remittance levels from the U.S. will be raised fourfold, from $2,000 to $8,000 per year. This will help drive an increase in spending power in Cuba, which is expected to grow at a compound annual rate of 4.6% through this decade. For global companies seeking a foothold anywhere they can, more money in the pockets of Cubans means more fuel for expansion. Take Coca-Cola. With an open Cuba, Coke could be legally be sold in every country in the world save one: North Korea.

Just 110 miles off the coast of Florida, Cuba should be a natural magnet for American travelers. Despite needing to meet special criteria to receive a visa from the State Department—allowable categories include educational and journalistic activities—170,000 Americans visited the country last year. As the restrictions slacken, the sky is literally the limit. JetBlue already charters flights to Cuba from the U.S., but the budget airline wants to start running regular commercial flights. American Airlines Group now flies to Cuba 20 times per week, a 33% increase in flights compared to just a year ago. More flights—and more competition—will make airfare more affordable, driving additional tourist traffic. 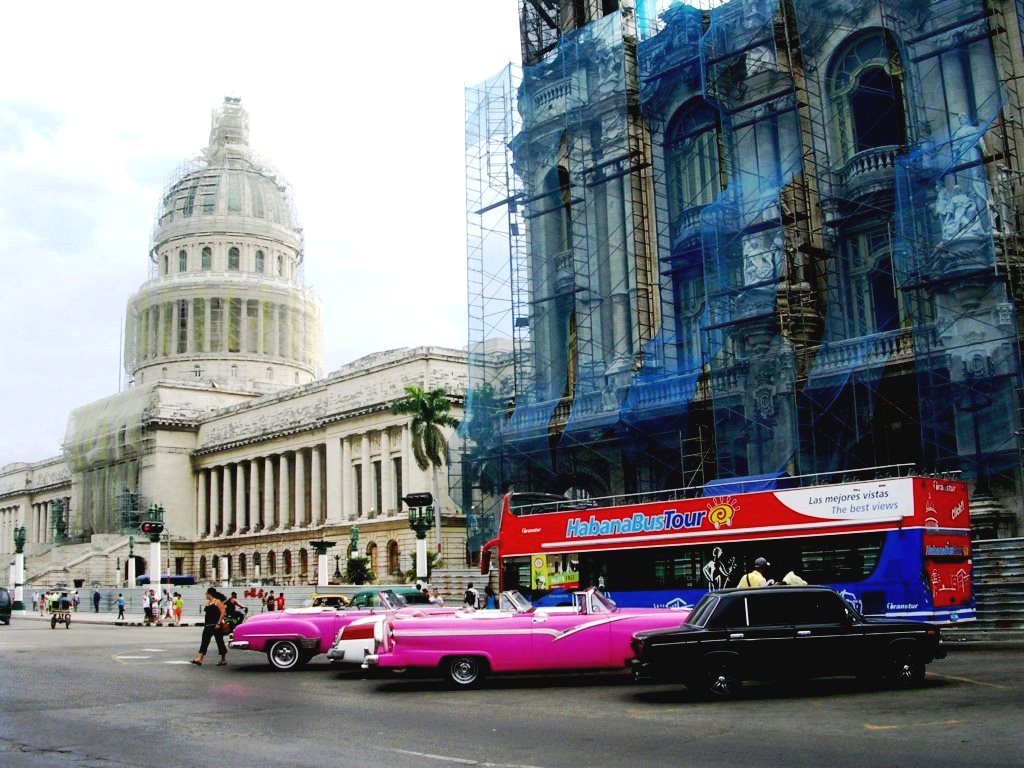 April 2014: the Capitolio, under renovation, to be the new home of the National Assembly; the Centro Gallego (old community center for Cubans of Galician origin), being restored to its former glory; a hop-on hop-off Tour bus; 1950s American automotive beauties and a Russian Lada.

Missing from this photo: a Chinese Geely, currently taking over Cuba’s automotive market.

Only one in ten Cubans regularly use mobile phones and only one in twenty have uncensored access to the Internet. Even state-restricted Internet penetration currently stands at just 23.2%. The telecom infrastructure is so underdeveloped that an hour of regulated Internet connectivity can cost up to 20% of the average Cuban’s monthly salary. There’s serious demand for the major infrastructure investments needed to improve these numbers. Some start-ups are making waves in spite of shoddy internet. Airbnb, a website that lets people rent out lodging, announced that it has started booking rooms in Cuba with over 1,000 hosts. It gets around the lack of Internet by teaming with middlemen who have long worked to link tourists with bed and breakfasts.

Cuba has the third highest number of physicians per capita, behind only Monaco and Qatar. They’re even used as an export: Venezuela pays $5.5 billion a year for the almost 40,000 Cuban medical professionals who now make up half of its health-care personnel. Cuban doctors lack access to most American pharmaceutical products and, importantly, to third-generation antibiotics. For its part, Cuba’s surprisingly robust biotech industry makes a number of vaccines not currently available in the U.S. With the normalization of relations, Cuba can look to fully capitalize on its medical strengths.

Cuba currently attracts around $500 million in foreign direct investment (FDI)—good for just 1% of GDP. Given its tumultuous political history and underdeveloped economy, it is difficult to accurately predict how quickly investors will flock once the embargo has been lifted. But a good comparison might be the Dominican Republic, another Caribbean nation with roughly the same size population as Cuba. The Peterson Institute for International Economics estimates that Cuba could potentially attract as much foreign capital as the Dominican Republic, which currently receives $17 billion in FDI ($2 billion from the U.S). But this won’t happen overnight—in the Heritage Foundation’s Index of Economic Freedom, Cuba ranks 177th out of 178, ahead only of North Korea.

This entry was posted in Blog and tagged Economic Recovery, US-Cuba Normalization. Bookmark the permalink.